The Agami Heron is a medium, elongated, extremely long-billed and long-necked heron of wooded tropical streams.

Adult: This is an exceptionally striking bird. The face and crown are black. Lores are pale yellow to yellow green. The irises are variable, light red brown, orange, or yellow. The bill is extraordinary; it is long rapier-like, averaging 140 mm but sometimes reaching 163 mm, about one-fifth of the bird’s total length. The bill too is variable from yellow with a dusky top edge to pale blue with a black tip. The base of the bill is yellow. The chin is white. The neck is very long, snake-like in appearance. The upper neck is chestnut with a central white stripe bordered by black. The lower neck is slate grey and features a characteristic mat of shaggy light grey feathers that vary from normal to uniquely sickle shaped plumes. The breast is pale grey to slate grey green. The belly is chestnut. The legs and toes are relatively short for the size of the bird. They are yellow to olive green with black claws.

In the breeding season it has ribbon-like light blue crest feathers up to 125 mm long and also broad slaty blue plumes on the lower back. During courtship and at other times during the breeding season, lores can turn from yellow or light green to red, with intermediate pink cream stages as well (Alvarado in prep.). This occurs rapidly and temporarily (Alvarado 1992). These color changes are part of interactions within pairs, occurring when the birds are together, touching, or displaying (Alvarado pers. comm.). During the breeding the legs and feet turn gradually from black to grey (Alvarado pers. comm.).

Variation: The female is smaller than the male. No other variation has been reported.

Juvenile: Immature birds are drab brown above, blacker on the crown and back, with whitish underparts streaked with black and buff on the lower breast. The throat has a narrow white and brown vertical streaks. Irises are grey white; the upper bill is black; the lower bill is green yellow; the facial skin is dull green yellow except for a dusky band across lores; legs and feet green yellow and grey green anterior (Marin 1989).

Chick: The downy chick is uniformly sooty black with pink skin and dark blue around the eye (Marin 1989). The irises are bright yellow. The upper bill is black with green at base. The lower bill is flesh colored with a black tip. The legs and feet are blue grey (Marin 1989).

The Agami Heron is identified by its long neck and bill, its chestnut belly, and its white head and back plumes. It is distinguished from all other herons by these features.

The Agami Heron has long been thought to be related to Egretta and Ardea herons, distinguished from them by its proportionately long neck and bill and distinctive plumes. However its plumage is quite distinct, as apparently is its courtship behavior. Recent molecular evidence is suggesting that it is not a typical heron, but rather a surviving representative of a different lineage of herons, basal to the main stem. Like the Boat Billed Heron and tiger herons, it appears to be sufficiently distinctive to afford it its own subfamily. Although this radical proposal is subject to future findings, it serves to emphasize how different this species might be.

The Agami Heron occurs in coastal Central and north South America and in the Orinoco and Amazon basins.

Migration: There is no clear indication of migratory movements, but dispersal records include east Brazil, Andes of Colombia at 2,600 m (Fjeldsa and Krabbe 1990), and Nuevo Leone, Mexico (Contreras and Balderas 1988).

Status: The Agami Heron is seldom observed and so its status is poorly known. In Panama, it is considered common, at least between January and June. It is poorly reported in South America, but are locally common in varzea forests. In appropriate habitat 20-30 may be seen in a day. Several to ten individuals nest together, suggesting reasonable regional populations exist within the range. 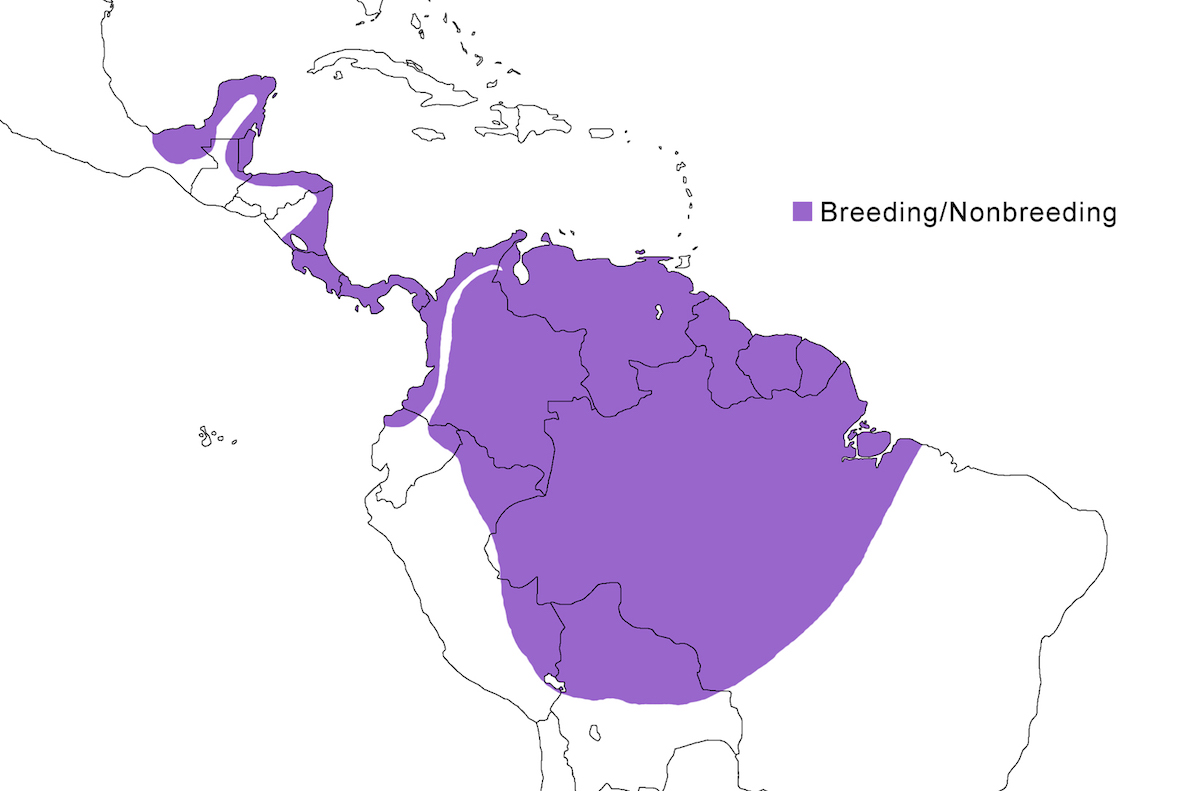 The preferred habitat is dense tropical lowland forest where they are concentrated along margins of streams, small rivers and swamps. They are also found, although less commonly, along the margins of pools, oxbow lakes, and other small water bodies. They are very rarely observed in dry forests along streams. The occur from coastal mangrove swamps to 300 m elevation.

The Agami Heron is a specialized bank fisher. It Stands in Crouched posture on banks, dykes, bushes, or branches overhanging the water. Its long neck permits a longer lunging Strike. It also Walks slowly in shallow water at the edge of a stream or pond.

With its long neck and bill, it is primarily a fish eating heron. It is known to eat cichlids (Aequidens) and various characins (Triportheus, Astyanax).

Nesting is during the wet season, June–September in Venezuela and Trinidad, March–July in Costa Rica. Young were in the nest in May in Brazil (do Nascimento 1990).

It nests in isolated clumps of mangroves, dead branches of drowned trees in an artificial lake, trees standing in water, and bushes within marshes. The Agami Heron is a colonial breeder nesting in very small numbers (6-11 nests) in colonies, and at times near other species including other herons (such as Striated Heron, Boat-billed Heron, Cattle Egrets—although these sometimes nest later), Anhinga (Anhinga) and ibis (Phimosus). In Venezuela, Agami Heron nests were near but separate from a mixed colony of 2,000 nests (Ramo and Busto 1982). The nest is a loose, thick platform of sticks or twigs, rather deeply cupped. They are located well within canopy cover.

Alvarado (1992, in prep.) observed a courtship display that appears a derivation from the Stretch, but distinctively so. She calls it a “Dance and Bow” display. With legs fixed in place, the bird puts its breast out and rocks its body smoothly from side to side. At the central position, it shakes its head, bill and crest while producing a snap sound. Then with wings semi-open and crest somewhat erect, the heron moving gradually lowers its head toward one foot, then towards the other with a trembling motion. This behavior was observed many times, and seems to be the principal pairing display for the species. It appears to be unique among herons.

Members of a pair also engage in Bill Duel display consisting of two birds threatening by jabbing their bills simultaneously toward each other and withdrawing immediately. Bill grabbing or the female lowering her head were not described as a part of the display in this species.

Young gain weight quickly, more than doubling in the first week (do Nascimento 1990). They are nearly motionless I the nest, but will readily climb out on branches when disturbed. It appears one to two chicks fledge.

The population biology is unknown.

There is very little information on the conservation status of this species. Once considered to be near Threatened by IUCN and HSG (Heinz et al. 2000), this classification was mostly due to deficient knowledge. It is in fact widespread, locally common and probably having a large population size over its extensive range. Given its known habits, it would be threatened by significant deforestation and damming of rivers. Nesting site protection is critical as the birds are easily disturbed. In Costa Rica, villagers cut trees adjacent to the colony site, and the birds then moved to a more secluded site (Marin 1989). However, birds allowed nestlings to be moved in the face of rising waters, suggesting active colony site management is possible (do Nascimento 1990).

Surveys, inventories, and recording of observations are needed to better assess the distribution, status, and, eventually, trends for the species. Pursuing the hypothesis that the Agami Heron represents a lineage of herons separate from the typical herons and bitterns puts new emphasis on increasing our knowledge of its basic biology, courtship behaviour, nesting, and feeding habitat requirements. Its unusual morphology should be further examined for additional insights into what may be the ultimate development of the long-billed fishing heron.

The Agami Heron is one of the more intriguing herons. It is an extraordinarily elongated heron. The details of its ecology remain little known, but it is certainly fundamentally a branch or bank-feeding heron. Its long neck and bill may be the maximum evolutionary development of fish-eating heron morphology. In hunting, it crouches low on its shortened legs and feet, which creates a pivot from which to lunge at its prey. It nests in colonies, which accumulate individuals from the region. Aspects of the relationships between colonial nesting and solitary feeding in this species deserve close investigation. Its actual breeding distribution and therefore its habitat requirements are only slowly becoming understood. Of particular interest are recent findings that suggest that the Agami Heron may be evolutionarily distinctive from other herons, perhaps the last remnant of an ancient lineage of South American herons.

§§§ Check out the Agami Heron Working Group to learn more and get involved with current conservation efforts.