About the Reddish Egret (Egretta rufescens): 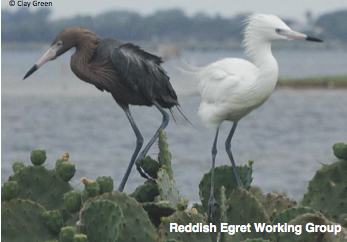 As an inhabitant almost exclusively of coastal lagoons of the Gulf Coast states, the Reddish Egret is North America’s rarest and least known ardeid. This species was nearly extirpated from the United States by plume hunters prior to 1900. Since then, populations have recovered, and U.S. populations currently total about 2,000 pairs; less is known about numbers in Mexico or the Caribbean. The species is dimorphic: the dark morph predominates in the United States and Mexico, with the white morph more common in the Bahamas and Greater Antilles. The Reddish Egret is remarkable for its extremely active foraging behavior, employing running, hopping, flying, and open-wing techniques to locate and pursue schools of small fish across barren shallow flats.

The Working Group’s function is to act as a coordinating body to ensure an active and strategic approach to the conservation of the Reddish Egret. The Working Group brings together dedicated individuals from research institutions, non-governmental and governmental organizations. It comprises people from all Reddish Egret range states, as well as those offering additional required expertise and support.

The Reddish Egret Working Group seeks to develop, support, and implement rangewide research and management efforts that promote the conservation of Reddish Egret and their habitats through individual and partnership-based initiatives guided by recommendations of the Working Group's membership.