The Bare-throated Tiger-Heron is a medium cryptically colored heron, with a green face and throat.

Adult: The crown and nape are black. The side of the head is grey. The upper bill is black with a blue horn cutting edge and the lower bill dull yellow. The irises are yellow to silver. The lores, skin around the eye, and featherless throat are yellow green, this color running onto the lower bill. A black line runs from the eye to the throat. The front of the neck is tawny and white striped. The hind neck is finely barred in brown and buff. The back is dark olive brown with very fine buff vermiculation. Flight feathers are black. Under parts are cinnamon and thighs are grey. The legs are dark grey olive to slate green. During nesting the bare throat may become bright yellow to orange.

Variation: The sexes are alike. Birds in Sonora and Sinaloa are larger with broader striping, and have been recognized as a distinct subspecies.

Juvenile: In the immature bird, the head, neck, and chest are barred and spotted with cinnamon buff and brown. The throat is yellow. Upper parts are dark brown boldly barred in cinnamon. Under parts pale buff with broad brown barring. Its tail and wings are blackish, with 4-5 narrow white bars.

Chick: The nestling has pale grey white down with the white erectile filamentous plumes on the crown.

Voice: “Woh” call, rendered “who, woh, woh, woh” or “howk, howk, howk”, is the disturbance call. The “Ohrr”, call rendered “ohrr, ohrr, orrr”, is a roaring or booming call used in the evening and at night, especially in the breeding season. It is probably an identification, contact and distancing call. The voice also has been described as croaking, snoring, barking and bellowing, so more study is needed.

The Bare-throated Tiger-Heron is identified by its black cap, grey head, and yellow face, and white feathered throat. It is a solitary, secretive species that is not often observed. Its flight is heavy. It is distinguished from the Rufescent Tiger-Heron and Fasciated Tiger-Heron by its black cap, yellow face and throat, and vermiculated brown (chestnut) neck. It is distinguished from the Botaurus bitterns by its slightly larger size, black cap extending further down the back, yellow face and throat, dark bill, and grey head.

The bare throat of this species was recognized for years as being highly distinctive. It is now placed in the same genus as the other two South American tiger herons. The tiger herons are a distinctive lineage of the Ardeidae, adapted to a forest existence. The five species constitute a sister group to all the other herons and bitterns and to the Boat Billed Heron (Sheldon et al. 1995).

Breeding range: In Mexico, it occurs as far north as south Tamaulipas and south Sonora, along both coasts, across the Isthmus of Tehuantepec, in all of the Yucatan, coastal in Central America through Panama, including Coida Island and Perles Archipelago but of limited distribution on the Caribbean slope, into extreme north west Colombia from Gulf of Urabá to the lower Atrato River valley.

Migration: It apparently is resident through it range as there is no report of migratory movements.

Status: Nothing is known of the population size or trends of this species. It is widespread throughout its range. It is reported to be or have been common in Honduras, Guatemala, Belize, Nicaragua, and Costa Rica; rare to uncommon and perhaps declining in Panama (Ridgely and Gwynne 1989); and possibly at risk in north Colombia (Kushlan and Hafner 2000). 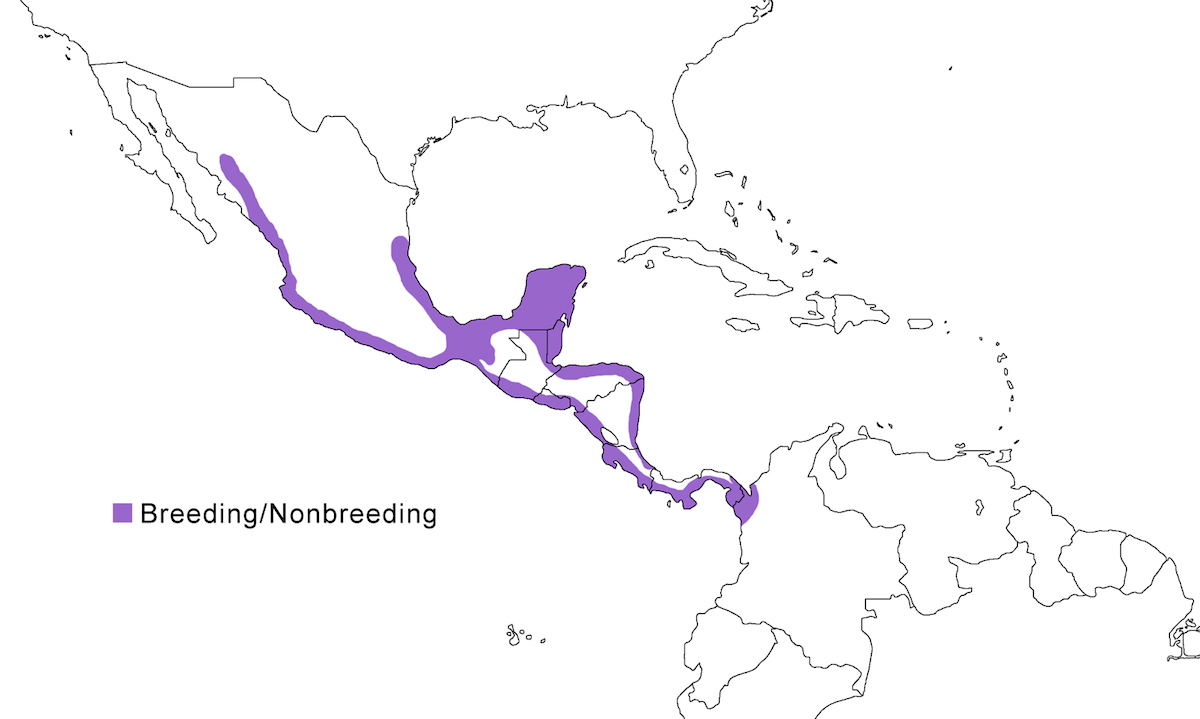 The Bare-throated Tiger-Heron is a bird of tropical swamps. Along the coast, it is typically a mangrove species. It is found, however, in a variety of coastal and freshwater situations, typically characterized as forest edged aquatic habitats. It feeds in coastal lagoons, mangrove swamps, fresh water marshes, swamps, gallery forests along rivers and streams, and wet meadows. It feeds more in the open and in larger habitats than other tiger herons. It is primarily a coastal species occurring below 1,000 m. It avoids human habitats.

The primary foraging behavior of this cryptic heron is Standing in shallow water or on the edge of the water, with neck stretched out diagonally, waiting motionless for long periods. It also Walks slowly, often in situations away from cover. It is a solitary species, usually foraging alone. However a dozen have been seen in a loose group when food is readily available. It is primarily crepuscular but also partially nocturnal. When disturbed it takes flight and perches in a nearby tree. It eats fish, frogs, crabs, and flies.

The breeding season is variable. In Costa Rica nesting may be year round but peaks at the early rainy season (Styles and Skutch 1989). It is May–August in most of its range but February–April in Panama. The tiger heron nests solitarily in trees above the water, especially in mangroves (Rhizophora). Nests are small to large platforms made of sticks usually lined with leaves. They are placed on branches 4-15 m above the ground.

Courtship is little understood in this species, and the displays reported have little context to them (Dickey and van Rossem 1938 Sutton et al. 1950, Wetmore 1965). The primary display appears to be a version of the Stretch—a pair faced each other, necks and bodies crouched horizontally, feathers fluffed up; the birds raise their bills and neck vertically, depressing the neck and body feathers, and emitting two or three hoarse booms or roars. They may sway the neck at the vertical. This may be repeated, and one bird may move toward the other. Mutual Bittern posture has also been described.

Eggs dull white with green tinge, rarely flecked with brown or buff. The usually unspotted eggs are not typical of the tiger herons (Dawn 1964). Two measured 56.6 x 43.5 mm and 58.1 x 45.3 mm. Clutches are 1-3 eggs. There is no information on incubation, chick development or fledging and little is known about the nesting success of this species. Nestlings are at risk to hawk (Buteogallus) predation (Lewis and Timm 1991).

Nothing is known about the population biology of this species.

A principal conservation concern for this species is the lack of information available on its distribution, populations, and trends. As a cryptic, solitary, forestedge species it is difficult to census. None the less there is sufficient reason to be concerned, especially in the south of its range. It is considered to be declining in Panama due to persecution, drainage, and development for agriculture (Ridgely and Gwynne 1989). The population in north Colombia is considered to be near Threatened due to habitat alteration in the Gulf of Uraba' and Rio Atrato (Hafner et al. 2000).

The ecology of the Bare-throated Tiger-Heron is clearly poorly understood. This is the case with most of the tiger herons; the accessibility of the habitats of this species should make it a prime candidate for detailed studies. The population status and distribution of the Bare-throated Night-Heron need to be assessed throughout its range, but particularly in the south. Its foraging biology and behaviour are poorly known and its family and territorial structure, courtship behaviour, and nesting biology are similarly little known. Study of its basic biology is needed to understand this species within the context of the other tiger herons, which differ by tending to occupy denser habitat, and also to provide a basis for conservation action. An intriguing study would be to examine variations in the egg colour of Tiger-Herons. Except for a single record, the species is reported to have plain, unmarked eggs unlike other tiger herons.

The Bare-throated Tiger-Heron is bird of tropical swamp forests, typically of coastal mangroves and gallery forests. Its feeding strategy is solitarily Standing patiently and Walking slowly looking for fish and other prey. It is a cryptic, but accessible species.