The Black-headed Heron is a medium black, grey and white heron commonly found in the grasslands of Africa.

Adult: The distinctively black of the head extends from the forehead down the back of the neck, including the few head plumes. The irises are yellow, and the lores are yellow and green. The upper bill is black, and the lower, yellow. The chin and throat are white, stippled with black, merging into a blue grey on the foreneck. Most of the body is grey - the back, wings, and undersides, including lanceolate plumes on the neck and back. The under wing feathers are white and legs are black. During courtship the iris turns ruby red, reverting to yellow through an intermediate orange phase. Apparently there are no seasonal color changes in the legs and bill.

Variation: The sexes are alike. There is no geographic variation described, but there is individual variation in the amount of white on the chin and throat. In some the lower throat is rufous; in others it is all black. Variation also occurs in the base grey color, from light to dark. In lighter birds, the head stands out more.

Chick: Chicks are covered with pale grey down and has a crest.

Voice: The nasal “Kvaak” call is its typical call. The “Kow” call is used on landing. It is a double “kow”, followed by a growl and ending with a triple “kut", rendered “kow, owk, errr, kut, kut, kut". A harsh “Kaah” call is given in the Forward. During the Stretch display, it gives a soft “How-oo” call.

The Blank Headed Heron is related to the other Ardea, but it is a distinctively terrestrial heron.

The Black-headed Heron is an African species.

Breeding range: It occurs in Africa south of the Sahara. Its range extends west to east, from Senegal, The Gambia, Nigeria, and Chad, to Sudan and Ethiopia, south to Cape Province of South Africa. Its distribution is relatively patchy, depending on vegetation state and season.

Migration: Black-headed Herons are migratory over most of their range. Northern birds migrate north during the rainy season to nest in the Sahel and Sudano-Guinean zones. In other areas of Africa, birds move to drier areas during the rainy season. In equatorial and south Africa, birds more sedentary. Vagrancy seems uncommon but dispersal records have been reported from Algeria, south west Europe, Oman, and Madagascar.

Status: This species is widespread throughout Africa. Generally it is one of the most numerous and commonly seen of the African large herons. It has expanded its range and increased population size benefiting from man made pastures, dams, and reservoirs, and even from urbanized habitats (Turner 2000). 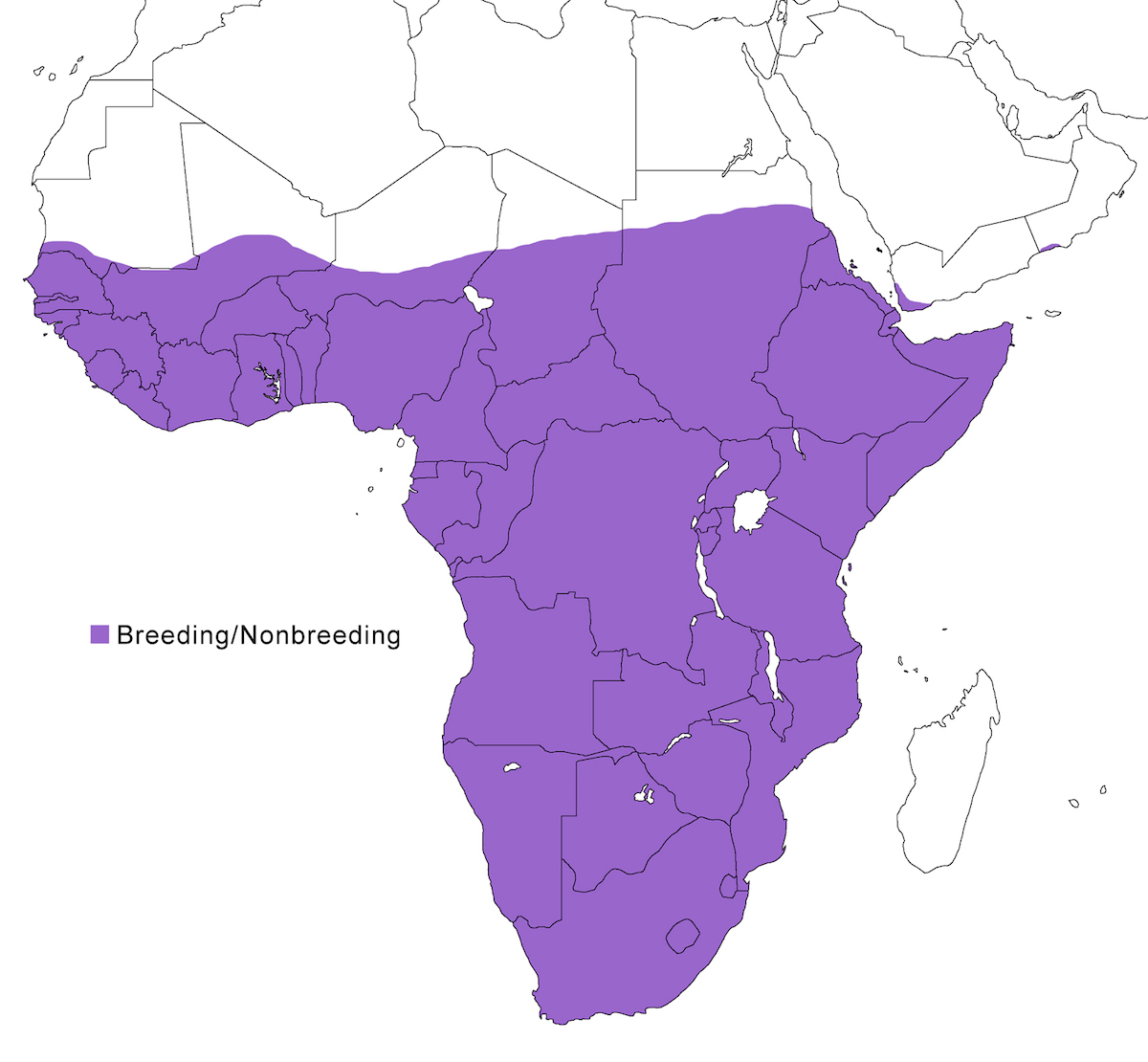 This is a heron of grasslands, inhabiting fairly open country either natural savannas or human-created grassland. It often is found in human altered environments, even breeding in towns. It uses such diverse but uniformly open habitats as wet meadows, damp pasture, farmland, grassland, clearing, shallow marshes, edges of rivers, ponds and lakes, coastal flats, and clearings. It is attracted to fields flooded by rains.

Black-headed Herons are generally solitary feeders, although on occasion they participate in loose flocks (Erwee 1989). At roosts and during nonnesting periods, they congregate in the tens to hundreds of birds. It feeds primarily by Walking Slowly, stalking through the grass. It lifts its feet high, keeps its head and neck erect and back, until it sights its prey. It frequently uses Neck Swaying, with increasing speed, before the final thrust. It also feeds by Standing. They feed commonly at night.

This terrestrial heron feeds on a variety of terrestrial invertebrates and vertebrates. Invertebrates include insects (especially grasshoppers and locusts), earthworms, blind worms, scorpions, crabs, and spiders. Vertebrates include fish, frogs, and lizards and small mammals such as rats, water voles, and musk-shrews (O’Connor 1984, Stuart and Durk 1984). Ground nesting and young birds are frequently taken (Forsyth 1984, Kahindi 1996, Uys and Underhill 1995). Food varies with season - insects are most important during the rains and become less important after grasslands dry. It also scavenges.

Black-headed Herons nest typically in the rainy season. In some areas, they may nest year round, but peak in the rainy season. They typically nest high in trees of many sorts, including palms. They also nest in reed beds or on the ground. They nest colonially in mixed species colonies of up to hundreds of pairs.

The nest is rather flimsy, built of twigs. Males collect the material, and fresh twigs with leaves are added during early nesting. The bird may even soak twigs before using them (van Gass 1989). Building takes about 15 days. Both birds attend the nest. Both parents brood and shade the nestlings.

The Forward display and Kaah call is given toward intruding birds. In its Stretch display, the bird points its bill upward while inflating the chin and throat, accentuating their whiteness. The birds gives the How-oo call, followed by a gentle gurgling. Crest Raising and Fluffed Neck display are used. In Contact Bill Clappering the heron runs its bill up and down the back and flank of its partner. Greeting Ceremony includes an exchange of loud cries. Until incubation begins the Greeting Ceremony tends to accompany every nest relief. Copulation occurs at the partly built nest.

The eggs are pale green blue. They average 60 x 43 mm. The clutch is 2 or 3 eggs, range of 2-6. Some pairs may have second or even third broods. Incubation takes 25 days. Adults feed young is by regurgitation at the nest. Birds fledge at 40-50 days. Young return to the nest to solicit food. They are independent by about 60 days. Nesting success is not well documented. Heavy predation of the young occurs by the eagles (Hieraaetus, Haliaeetus, Aquila) (Brown et al. 1982, Petzer 1990).

Population biology and demography of the species are little known.

The species is widespread, common, increasing and adaptable. It is not a major conservation concern. It has benefited from land clearing for pasture, irrigation, farming, and other human alterations. Protection of large colony sites and feeding habitat is needed throughout Africa.

The basic biology of this species is fairly well known. But little is known about demographic parameters, such as survival and recruitment. There is a need to better delineate the actual breeding vs. non-breeding ranges and the important nesting sites. The movement patterns of individual populations should be better understood.

The Black-headed Heron is a terrestrial heron, a larger edition of the Cattle Egret. It uses open African grasslands but has been able to invade and uses many similar habitats created by humans. It consumes terrestrial prey, both insects and vertebrates, which it encounters by stalking slowly through the grass. Like the Cattle Egret it Walks slowly using Neck Swaying to encourage the prey to move. It is attracted to sites where food becomes ephemerally available, such as after rains, floods, fires, and locust outbreaks. It is highly adaptable, feeding in many different situations. It nests colonially with other herons, but feeds individually unless food is highly abundant. It is a species widespread in Africa, and well accommodated to the grassland habitat that typifies much of the continent.