The Capped Heron is a medium size white heron, sporting with a distinctive black cap set off by long white head plumes.

Adult: The base color of the Capped Heron is white, setting off the distinctive black crown. The bill too is distinctive, predominantly blue-grey, reddish in the centre, tipped in grey or yellow. The forehead is white or grey and lores bright blue. The iris is yellow, green-brown, to brown. The distinctive slender white head plumes may be as long as 20 cm. On the back and wings, it is a pearl to pale white with grey shading. The relatively thick (for a heron) neck has a variable amount of cream color. The legs are blue grey, with somewhat darker toes. During the nesting season, the plumage especially head, neck, breast and under wings become tinged with yellow and buff, the neck at times achieving an intense cream color. This coloration is likely to be adventitious, probably derived from powder down. Reports suggest that the blue of soft parts deepen in the nesting season, often described as cobalt.

Variation: As far as is known, sexes are indistinguishable. There are no races recognized.

Juvenile: The fledgling’s plumage is white like the adult, but it has a streaked crown and is paler grey on the wings. Juveniles retain some white and grey variegation on the head and have greyer wings than adults. Younger juveniles lack head plumes, but do develop them while in juvenile plumage.

Chick: Chick has white down.

Voice: The “Whoop” call, rendered, “woop, woop, woo”, is used in mate communications, and is given as a bird lowers its head in front of its mate and opens its crest (Sick 1998). It also makes gutteral croaks.

The Capped Heron is identified by its white plumage, dark black cap with white plumes, from which derives its common English name, its long blue bill, and thick white to cream colored neck of the Capped Heron. It is usually found feeding alone, and flies distinctively for a heron, with shallow wing beats never rising above the horizontal, somewhat parrot-like (Hancock and Kushlan 1984).

It is distinguished from other white herons in its range, such as the Snow Egret and immature Little Blue Heron, by its black cap and white body.

The Capped Heron is a typical heron, related to the day and night herons. Based on molecular evidence it appears that it is most closely related to the Whistling Heron (McCraken pers. comm.). Morphologically it is distinctive enough to be retained in its own genus.

The Capped Heron is a tropical South American heron, fundamentally a bird of the Orinoco and Amazon.

Breeding range: Its breeding range extends northward to the Canal Zone on both coasts in Panama, south through inland Venezuela (Kushlan et al. 1982, Morales 2000), east to the Guianas, west to the Andes of Ecuador, Peru and south to north east Bolivia, north Paraguay, and south Brazil (Santa Catarina). It is reported west of the Andes only rarely (Ridgely and Gwynne 1993).

Migration: It is non-migratory in most of its range, but has been recorded as seasonal in Darién, Panama, and would probably be expected to shift around in response to seasonality of habitat conditions, although this remains to be described.

Status: The species is widespread, but uncommon in most locations throughout its range. The core of its range seems to be the Orinoco and Amazonia and is less common peripherally in the Guyanas, Brazil, Colombia, and Panama. It uses human altered habitats and perhaps has become more common in Panama (Sick 1998, Butler et al. 2000). Even at low density, the total population is probably large and is in no particular risk. 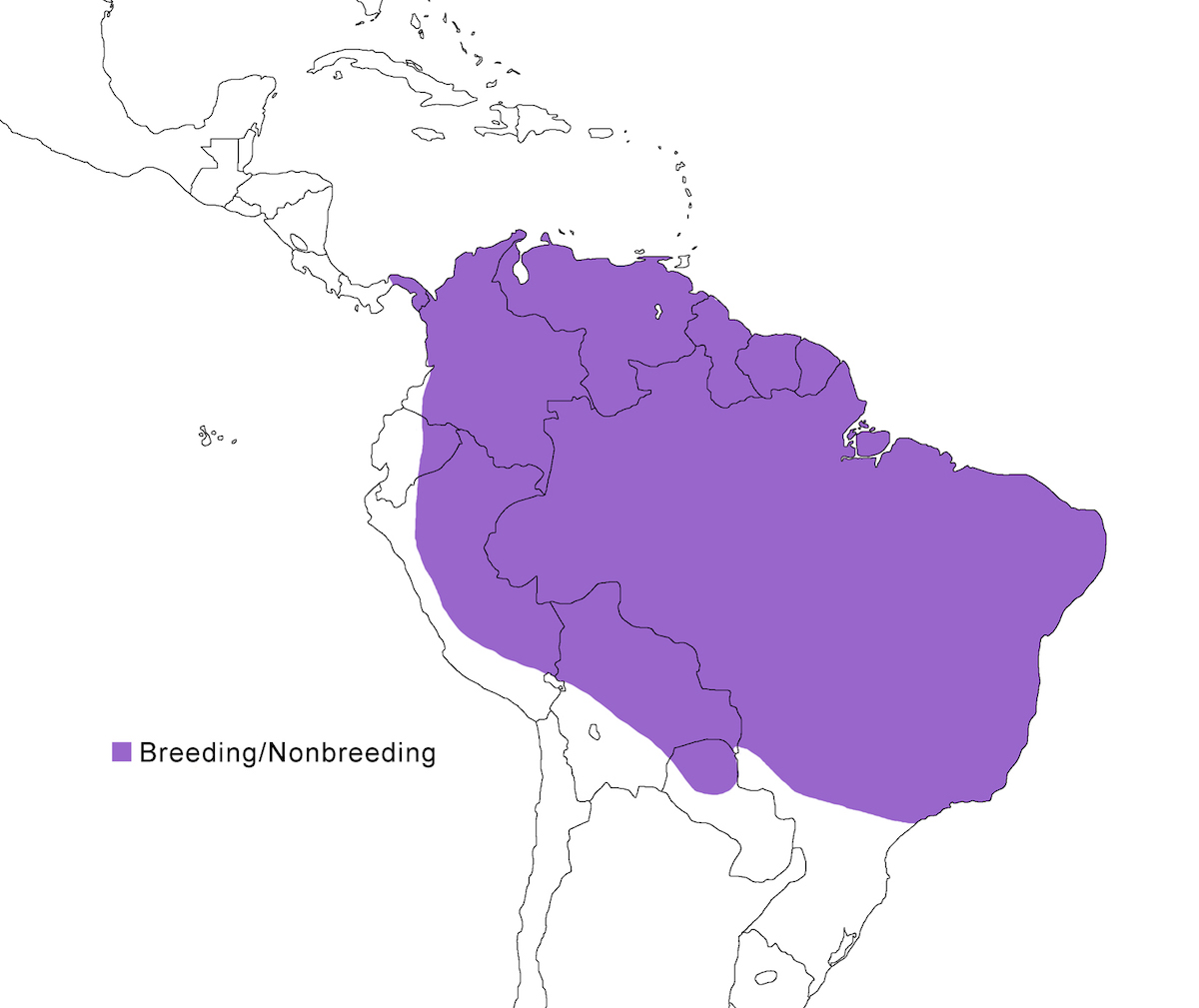 The Capped Heron is primarily a bird of forested swamps having rivers and ponds and of open marshy areas near gallery forests (Blake 1977, Kushlan et al. 1982, Hancock and Kushlan 1984, Teixeira and Carvalho 1985, Morales 2000). It is found in the lowlands and upland rain forests below 900 m. It can occur more broadly, however, and also is reported from such aquatic habitats as swamps, savannahs, open woodlands, and edges of rivers and ponds, wet marshes, road side pools, sandy, muddy, grassy and rocky river banks and such man modified habitats as rice fields, coffee plantations, public gardens, and pools along the Transamazonian Highway. It is dispersed and thinly spread over available habitat. In Colombia, it occurs well dispersed along riverbanks (Hilty and Brown 1986).

The Capped Heron is a diurnal, aquatic heron, usually seen feeding streamside or in puddles. It tends to feed alone, although may loosely join larger groups of feeding wading birds. It forages slowly and deliberately, primarily by Standing and Slow Walking, remaining in a small area for quite some time reworking it repeatedly. It often stands rather erect, intently looking for potential prey with its neck stretched out or folded back into a compact s shape. When Walking Slowly it progresses very slowly, holding a pose for a few seconds while slowly moving a foot to take a new step. It is able to feed by more active methods, such as by Gleaning, Foot Paddling, Dipping, Swimming Feeding, Bill-vibrating (Hancock and Kushlan 1984). It strikes with deliberation, slowly crouching and extending its neck toward the prey item before making a Bill Thrust, often accompanied by a body lunge. It Grasps or Pierces the prey and also uses Pecking, sometimes without apparent orientation, or Grabbing. It may Neck Sway or Peer Over turning the head quickly from side to side and holding the neck arched out for minutes.

Specimens in breeding condition have been taken in Venezuela in early March. It nests solitarily in trees in forests, but a great deal more needs to be known. In captivity, birds made a nest of dry twigs placed in trees. Nothing is known of this heron’s breeding behavior. In captivity, clutches consisted of 3-4 dull white eggs averaging 43.2 x 35.9 mm and incubation was 26-27 days.

Nothing is known about the population dynamics of this species.

The Capped Heron is a widespread species that is expanding its range, and perhaps its use of man made habitats. With a widely dispersed and probably relatively large global population, it is not known to have any present conservation risk. However, it is basically a species of riverine forests, and the loss of this habitat by logging and conversion to pasture would pose long-term threats to population stability.

Despite being so widespread in South America, the Capped Heron is one of the least known herons. Most of its basic biology is unknown: feeding habits, nesting biology, courtship, interactions within the pair, individual movements, details of habitat use, survivorship, and even the details of its range. Study of individually marked or telemetred birds over a large enough area to encompass several pairs would be a useful approach to deciphering its fundamental breeding biology. Determining population density and its more precise range are needed to properly assess its conservation status.

This is a distinctive heron, readily noted in appropriate habitat by not only its plumage but in its erect, solitary, slow foraging, and use of water edges. The Capped Heron is primarily a bird of open edges to water courses. It is a passive feeder, primarily on fish and aquatic insects usually seen Standing still or Walking carefully along its chosen bank. It is most often observed solitarily or in pairs. It is likely that pair bonds are long lasting. Little is known about nesting or parental care. Other herons with a similar biology maintain family groups and care for young after fledging. Much remains to be known about this species.