The Chinese Egret is a white, medium-sized east Asian, with yellow bill and feet and dark legs.

Adult: This egret’s plumage is all white. The bill is dusky with inner lower bill yellow to pink. The irises are pale white yellow. The lores are variably yellow green, to green, to grey (Long et al. 1999). The legs are pale to dark green with green yellow feet. In breeding season, the exceptional ornamental plumes develop to their greatest extent. Crest feathers are long and dense, sometimes over 11 cm long. The breast plumes also are long and the loose aigrette plumes on the back extend to beyond the tail. In courtship the bill is yellow orange; lores are bright blue; legs are black, fading back to green black, and feet are yellow.

Variation: Sexes are alike. There is no known geographic variation.

Juvenile: Young are like the nonbreeding adult, lacking luxuriant plumes.

Voice: The voice of this egret is not described.

At some times of year, the Chinese Egret is not easily distinguished from other medium white egrets, especially the Eastern Reef-Heron, a situation that caused it to go unrecognized as a species for along time (Lansdown 1990, Poole et al. 1999). In breeding season, it is identified by a combination of black legs, yellow feet, yellow bill, blue lores, luxuriant crest and also by its feeding behavior, running back and forth.

The Chinese Egret is one of several medium sized, white, yellow-footed egrets, the taxonomy of which still needs to be fully understood. It was previously considered to be a morph of the Eastern Reef-Heron, from which it differs substantially during the breeding season.

The Chinese Egret occurs along the coast of east Asia from east Russia, through China into Indonesia, Philippines, and Malaysia (Murton 1972, Lansdown 1990, Lansdown et al. 2000).

Breeding range: As far as is known, this egret breeds only in a few locations in east Asia. One site occurs in east Russia (Furugelm Island, offshore Maritime Province south of Vladovostok) (Litvinenko and Shibaev 2000). Three recent colony sites are known in west North Korea. One colony is known from west South Korea. Three recent sites are known from east China (near Shanghai, Henan (Zhang et al. 1994), Luchan Kou). The well-known colony in Hong Kong has been inactive since 1985. Outside the core breeding range, nesting has been attempted irregularly in Japan (Ishikawa, Miyagi, Hokkaido, Honshu, Kyushu, Tokara Islands). It last bred in Taiwan in the nineteenth century.

Migration: The Chinese Egret is highly migratory (Lansdown et al. 2000). After fledging in July, there is a dispersal to coastal wetlands where birds congregate at coastal feeding sites. This is followed by a southward migration in September and October through coastal South Korea, Japan, Ryikyu Islands, coastal China, Taiwan and Batanes Islands. Birds then move to the Philippines and Borneo and others continue down the coast of Vietnam to the Malay Peninsula including Singapore where a Korean-banded bird was observed (Mundkur 1993). Spring migration is in March and April.

Dispersal sightings include Myanmar, Viet Nam (Pedersen et al. 1998), Sumatra (Silvius 1991), Java (Andrews 1993), Sulawesi, Comoros Islands, the United States (Aleutian and Pribilof Islands) (Hoyer and Smith 1997). Some of these records may be indicative of more consistent wintering or stop over use than is now understood. Older records from west Sumatra, Christmas Island, India, Myanmar, and Mentawani islands were based on misidentified specimens (BirdLife 2001).

It occurs in small numbers in Russia, the single colony in east Russia having 30-40 pairs (Litvinenko and Shibaev 1999). In the 1990’s 600-1,000 birds nested in South Korea and 1,000-1,200 nested in North Korea, but both have declined recently. Estimates include: North Korea colonies support about 400 pairs, the South Korea colony has about 400 pairs; the three China colonies have had about 60, 60, and < 300 pairs; It breeding population is fallen in South Korea. It no longer breeds in Hong Kong. In the nonbreeding season, 1,600 birds were counted wintering in the Philippines. It is likely that its global population continues to decline. It is considered rare in Japan and as a the Philippines.

In the 19th Century, the Chinese heron likely was abundant in certain areas of China (Taiwan, Fukien, Kwangtung, Kiangsibut). It has been thought that it suffered severe population reduction during the plume-hunting era as it was hunted for its remarkable plumes. However, contrary evidence suggests that it remained relatively numerous in Korea and China post plume trade (BirdLife 2001). Its recovery was inhibited by hunting and habitat alteration, especially the loss of wetlands to agriculture, which led to its gradual decrease in recent decades. Contemporary breeding should be looked for in mainland China (Jilin, Henen, Hunan). 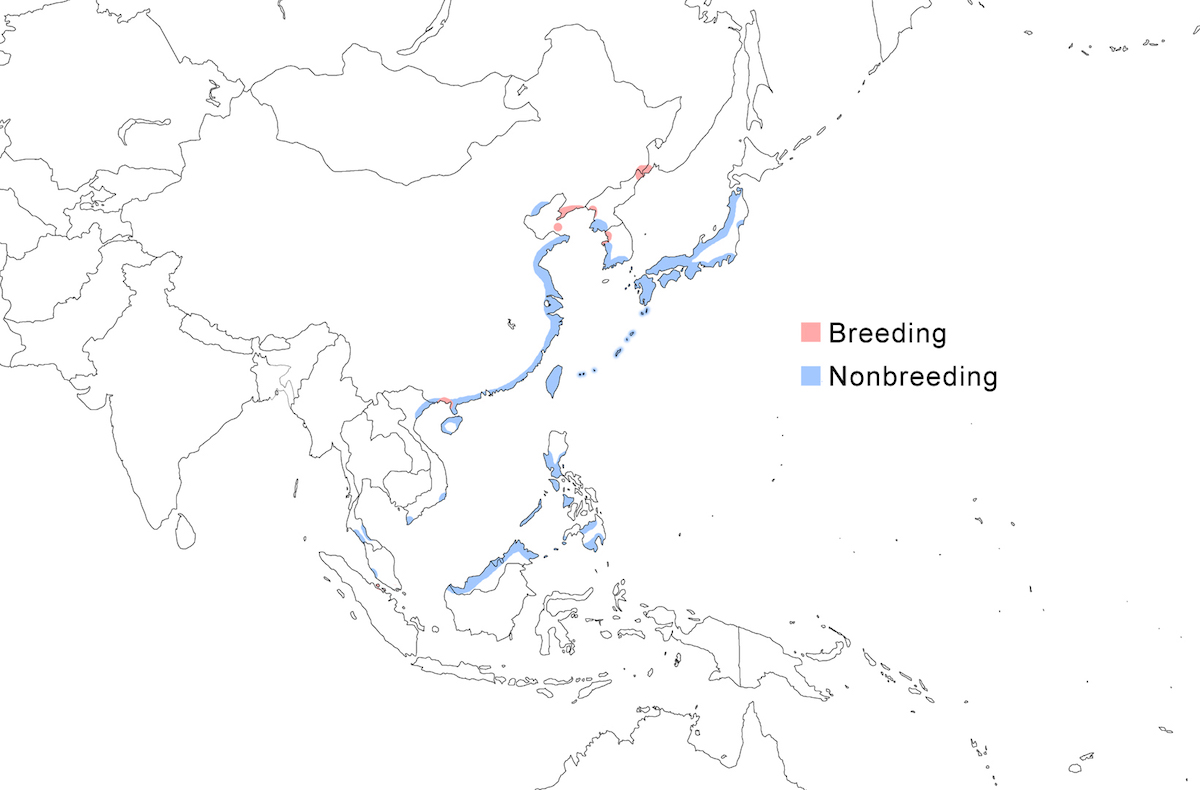 The Chinese Egret is a bird of coastal estuaries and sea embayments. It most often is seen feeding in very shallow water within brackish coastal lagoons and embayments and nearby freshwater sites. Birds may at times use an array of very shallow water feeding habitats, including shallow tidal estuaries, tidal mud flats, rocky coasts, marshes, lagoons, saltpans, and river edges.. However they also use rice fields and inland ponds on migration and in winter. In the Philippines in winter, they occur on intertidal mudflats and coastal freshwater marshes. They nest on islands near to coastal feeding areas. Most wintering records are also from coastal areas (BirdLife 2001).

The Chinese Egret is a very active, energetic feeder moving quickly around its feeding site to find and chase fish. It Walks Slowly and Stands, but its favorite technique is Running rapidly to and fro, with wings often half-spread and flapped or flicked, and repeatedly stabbing in the water, in a manner very like that of the Reddish Egret in North America. It feeds alone or in small groups. Feeding is tidally dependent, the birds following the falling tide and roosting in mangrove trees during high tide. They also feed from perches and also by Feet First Jumping.

The main food is small fish and shrimps, which are susceptible to its active feeding technique. Crabs and insects are also eaten. In one colony in China, it fed only on loaches.

The Chinese Egret nests in the northern summer, nesting in May young fledging in July. All recent nesting records of this species nests has been from offshore islands, including on rocky cliffs of sea islands. Nests are situated in trees (e.g., Quercus) in Hong Kong, Japan, and China but also on low bushes (Sambucus), herbaceous plants, or even on the rocks on the ground. It is a colonial nester, breeding in mixed species colonies with Grey Herons, Little Egrets, Cattle Egrets, Chinese Pond-Herons, Black Crowned Night-Herons, cormorants (Phalacrocorax), gulls (Larus), guillemots (Cepphus), auklets (Cerorhynca), and puffins (Fratercula). If disturber, these egrets will move their nesting attempts from one site to the next (BirdLife 2001).

Hatching is asynchronous and chicks are attended and fed by the parents about four times per day. Hatching rate was 84%. Birds can move around in the trees at 20 days and are dependent on adults for up to 40 days (Swennen and Won 1993, Zhang et al. 1994, Wen 1997). Nesting success rate of eggs was 40% in China (Zhang et al. 1994). Much additional information is needed on breeding biology of this rare species.

Nearly nothing is known about the population biology of this species.

The species has been hunted in the past, both for plumes and eggs, which were eaten by women who believed that they improved their skin. Hunting remains a threat in mainland China and Vietnam. Conflicts with aquaculture appear to have led to killing egrets at fish cages, a situation that merits investigation. However, the most important, and continuing, cause of its decline is habitat loss, especially widespread coastal development, including drainage and reclamation of tidal mud flats and estuaries for industry, aquaculture, and other developments. In South Korea, major facilities have been constructed along the coast involving wetland reclamation (BirdLife 2001). Construction of Inchon Airport in the 1990’s, led to a decrease and final abandonment of the Sammok Island colony site. Other estuaries and coastal sites face similar threats along the rapidly developing coasts of Korea, Vietnam, and China, as exemplified by the egret’s abandonment of its long-term nesting area near Hong Kong. Wintering habitat is also threatened in Philippines and Malaysia (Sabah, Sarawak) by the harvest of mangroves for firewood, development for aquaculture, drainage, and land filling. Disturbance to its few remaining nesting colonies and its intertidal mud flat feeding sites is a continuing and expanding concern. Evidence of such disturbance exists from Russia, North Korea, South Korea, and Vietnam (BirdLife 2001).

The species is vulnerable (IUCN 2003). It was upgraded from Endangered in 1994 owing to the discovery of Korean and Chinese colonies and the Philippine wintering grounds. But with fewer than 3,400 birds and its habitat under immediate threat, it truly remains a heron of great concern. It is protected or listed in Russia, South Korea, China including Taiwan. An immediate conservation action plan for this heron is needed. All major colony sites, their intertidal feeding sites, and important wintering sites need to be protected, but especially the sites in North and South Korea, China, and the Philippines. Governments need to fully protect the colony and feeding sites of these birds as the core action in a global conservation strategy for this species. Sites holding more than 30 individuals should be designated as important bird areas and wetlands of international importance. The Russian colonies of Furugelm Island are protected by virtue of being in the Far-Eastern Marine Reserve. However, feeding sites for these colonies, located 15 km away, are not now protected and should be added to the Reserve. The North Korean sites were at threat from egging, but are now protected. They remain threatened by wetland reclamation and coastal development pressures. Feeding areas for the South Korea colony site are threatened by airport construction (Hafner et al. 2000). Given the concentration of wintering birds in the Philippines, protecting and managing these sites become critical to the survival of the species. Stopover sites are little understood, but as banding and observations increase, important stopover sites need to be identified and protected. A comprehensive monitoring programme for nesting and nonbreeding birds should be developed.

Complete and careful surveys of the breeding range are needed to identify additional colony sites and other important areas in summer, winter, and migration. Records of birds in spring and in breeding plumage should be investigated. Banding studies to determine migration, wintering, and survival patterns should be continued and expanded by increasing observer coverage and intercommunication. Additional study is needed on the plumage, moult, and seasonal soft-part colours of this species in order to discover the additional identification keys needed to determine its range and movement patterns in autumn and winter. A monitoring programme should be developed that can assess population trends. A modern taxonomic study, as part of a larger study of the systematics of the medium Egretta, is needed to clarify species relationships.

The Chinese Egret is a coastal species specialized to feed in open tidal lagoons and nest on nearby islands. Its active feeding behaviour is similar to other coastal egrets, most notably the Reddish Egret of North America. Active pursuing methods of foraging are useful when there is little cover, in bright conditions, and in shallow water. It feeds on the falling tide when decreasing water traps and exposes target prey. It nests on sea islands.