The Chinese Pond-Heron is a small white bird with golden buff streaks on the head and back; and in breeding season it is a dark bird with wine chestnut head and neck and purple black back with white wings.

Adult: The nonbreeding adult has a golden brown to buff streaked head. The bill is yellow with a dusky upper bill and dark tip. The irises are gold yellow an lores are green yellow. The chin is white, whereas the neck and throat are streaked white, brown and golden buff. The back is olive brown, with the feathers tending to cover the wings. Wings are white with the outer flight feathers having an olive brown tinge. The legs are yellow.

In breeding, the head is wine chestnut, with a crest that includes long rufous lanceolate plumes. The bill is yellow with a dark tip and blue base. Lores are green yellow. The throat is white and the sides of the head, hind neck, upper breast are rufous. The upper breast has long maroon plumes and lower breast, dark grey plumes. The back is dark slate with purple bronze cast. Long black back plumes extend beyond the tail and cover much of the white wing. The belly is white. The legs become pink red.

Variation: The female in breeding has less developed plumes, a paler foreneck and lacks the black component of the breast plumes. There is no geographic variation described.

Juvenile: The juvenile is like the nonbreeding adult, with buff head heavily streaked in dark brown. The under parts are white with heavy brown streaks.

Chick: The downy chicks are brown and white.

Voice: This is generally a quiet bird outside the nesting season. Calls have not been documented.

The Chinese Pond-Heron is identified in breeding season by its dark back and red chestnut head and neck. It flies with a rapid wing beats, its head well tucked back. Despite its overall darkness, at a distance the bird appears white in flight due to its white wings and, closer, it appears black and white.

It is distinguished from the Cattle Egret by being darker. It differs from the Javan Pond-Heron by its darker head (chestnut not golden), chestnut (not cinnamon) breast, and chestnut (not white buff) crest plumes. Nonbreeding birds and juveniles are very difficult to distinguish from other pond herons. Immature and nonbreeding Chinese Pond-Herons are distinguishable from the equivalent Javan Pond-Heron only by being larger, with larger bill, and having darker tips to the flight feathers. These features are hard to distinguish in the field. The immature and nonbreeding birds are distinguished from the adult Squacco Heron by its dark (not tawny brown) back and the lack of any hint of black streaking on the head and crest.

The Chinese Pond-Heron is an Ardeola heron, closely related to the other typical pond herons. Four of the pond herons (Indian, Javan, Chinese and Squacco) are sometimes considered to be subspecies of Ardeola ralloides. In the extreme west of its range, it overlaps and nests in the same colonies as the Indian Pond-Heron. The appropriate relationship among the several forms requires additional, molecular, study as well as further observations in zones of overlap.

The Chinese Pond-Heron occurs in east Asia through Indonesia.

Migration: Northern birds are migratory, moving south to and through south China in September–October. Indian and more southern birds are sedentary, with some local movement.

Status: It is abundant through most of its core range. It is common and expanding in east China. Large colonies are reported from some areas, such as Yunnan. It is a recent colonizer as a breeding species in Japan. It is common in winter in peninsular Malaysia, Vietnam, Thailand, and Borneo. It is rare in winter in Philippines and Sabah (Sheldon et al. 2001). 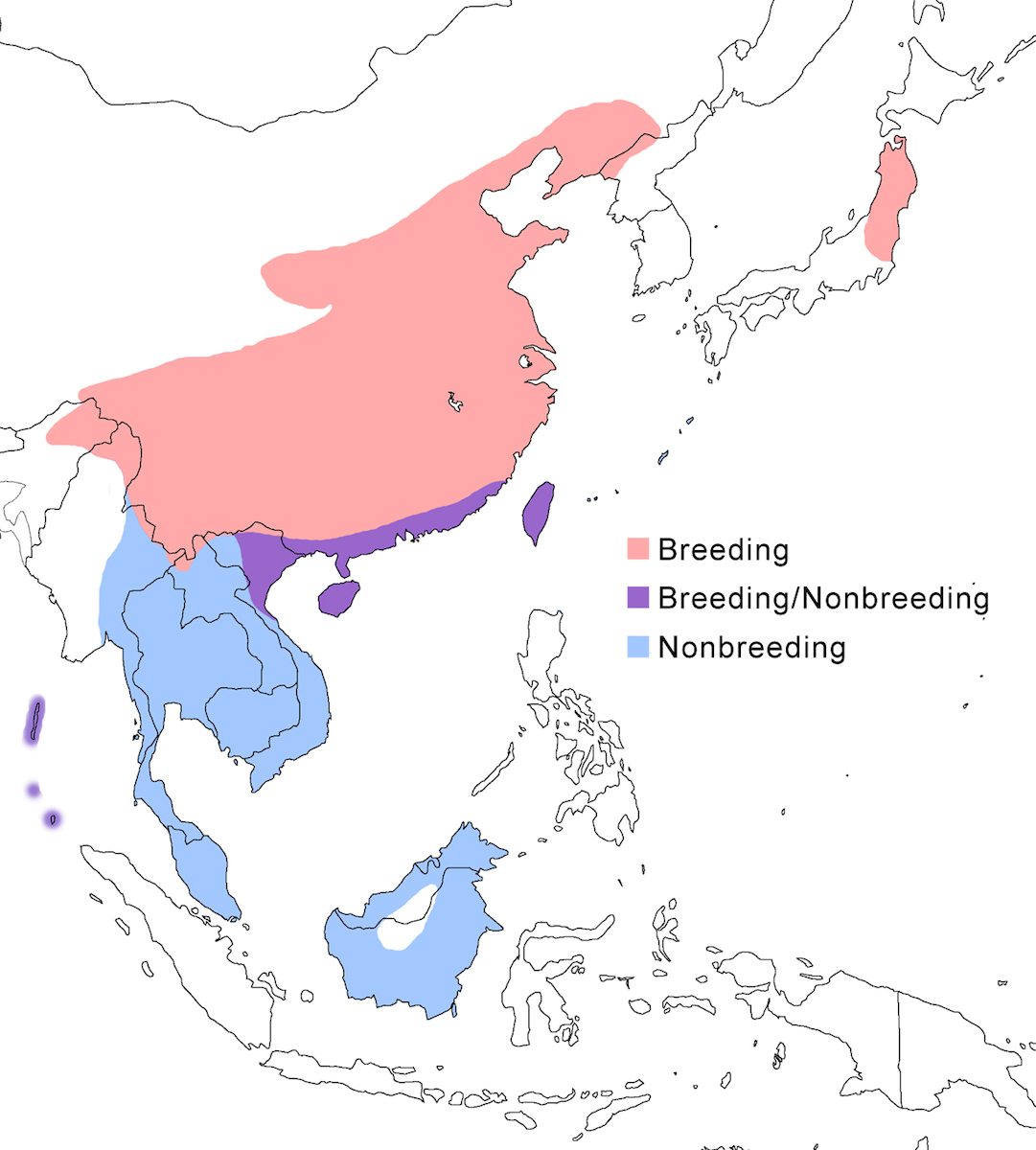 It feeds by Standing and by Walking, very slowly. Much if its normal feeding is unquantified. It has been reported as using more unusual techniques. It Dives from over hanging branches, as much as 10 m high. It sometimes forages within trees for flies (Melville 1990) and has been described as feeding commensally with otters (Lutra) (Kruuk et al. 1993).

It generally feeds solitarily or in pairs. Sometimes it occurs in small flocks of up to 6 birds. It feeds crepuscularly, roosting during midday, but there also are observations of feeding during the day. It roosts in mixed species roosts, fling to roost in evening, flying to the roost in small groups of 2 or 3 birds.

The Chinese Pond-Heron breeds in May–August in India, April–July in China. It nests in trees and bushes next to or near marshes, swamps, rivers and ponds, in mixed species colonies with night herons and Little Egrets. Breeding density in China was 1401 individuals per hm2 (Zhu et al. 1994).

Nests are made of small sticks, sometimes lined with leaves and grass. They are placed high in trees, often near the top (Shen et al. 1987, Zhu et al. 1994). In one study over 50% were above 10 m. Trees and bushes used in nesting include Populus, Sophora, Quercus, Ulmus, Ficus, Cunninghamia, Tea, Sassafras). They also nest in bamboo.

The courtship behavior has not been described. Eggs are green blue. Their size has been reported as averaging 37.7 x 28.4 and 39 x 29.7, but eggs in this species appear to be highly variable in one study ranging from 32.6 x 27.2 to 43.6 x 31.8 mm (Shen et al. 1987). Clutch is 4-6 with a range of 2-8 eggs. The Chinese Pond-Heron is typically double brooded. A second clutch is laid soon after the first young have become independent. Incubation is 18-22 days, with both parents brooding the eggs.

Not much is recorded on hatching and rearing of young. Both parents feed the nestlings. Chicks can have their food stolen by mynas (Acridotheras) (Leader 1995a). Growth is relatively fast, until fledging at 30 days (Zhu et al. 1994). They are independent by 36 days. There is no information on nesting success.

There is no information on demography and population biology of this species.

This is a common bird in its range, and one that has acclimatized to the human environment by using rice fields and other artificial habitats. The use of these are now likely critical to population stability. The loss of fish pond habitat led to a decrease of herons in Hong Kong (Young 1998). The management of occupied wetlands, including artificial environments occupied by the birds, is a critical conservation measure for the long-term stability of the populations. Eggs and birds are taken for food in China (Parish and Melville 1985). However, range expansion continues despite these losses. Hunting and other human use need to be evaluated.

This is a cryptic, solitary, slow-moving hunter, usually within and at the edge of dense vegetation. It frequents both natural and man-made habitats. As a result, it is a common to abundant bird over much of its range.