The Cinnamon Bittern is a small, predominantly rufous heron with paler under parts.

Adult: The crown, sides of head, nape, back, wings and tail of the adult male are cinnamon rufous. The bill is yellow to green orange with top edge horn. The lores are yellow. The irises are yellow to orange. The chin and throat are buff white, and a broad dark brown rather ragged median streak runs down the front of the neck. A tuft of loose black and dark brown feathers on the side of and at the base of the neck is expansible for display. The upper wing is rufous. The under wing is pink cinnamon to chestnut grey. The under parts are cinnamon buff, paler than the upper parts. Tail is chestnut brown. Legs are yellow green.

With onset of breeding soft-parts colors brighten, most markedly in the male. The iris has been described as yellow, orange, or pinkish-red, the last two probably being associated with courtship. The bill becomes more orange, and the skin of the lores turns to a dark or purple red in the male. The legs also are said to brighten. The dark head takes on a silvery sheen from the powder down (Lansdown 1988).

Variation: The female Cinnamon Bittern is smaller. It has a sooty crown. Lores are yellow. The back has a generally brown chestnut coloration with a grey wash and large buff spots on wings. The neck has several vertical dark stripes running the length of the neck. The neck plume cluster is smaller than the male's, dark brown edged in buff. The upper wing is cinnamon rufous. The under wing is rufous buff.

Chick: The chick has pink chestnut down.

The Cinnamon Bittern is one of the small bitterns, Ixobrychus, that share similar plumage, white eggs, scutellate tarsi, and ten tail feathers.

The Cinnamon Bittern occurs in Pakistan and India, through south east Asia, Indonesia and the Philippines.

Migration: Southern Cinnamon Bitterns are sedentary; northern birds are migratory. They move south by September and October. In India, movements may be governed by rainy seasons. Return migration is in April–May. Dispersal records include the Seychelles (Lucking 1995), east Russia (Labzyuk and Glushenko 1984) and an extraordinarily record from Morocco (Robertson 1995).

Status: This is a common to abundant bird through most of its range including, Thailand, Malaysia, Sumatra, Java, Bali, Philippines. 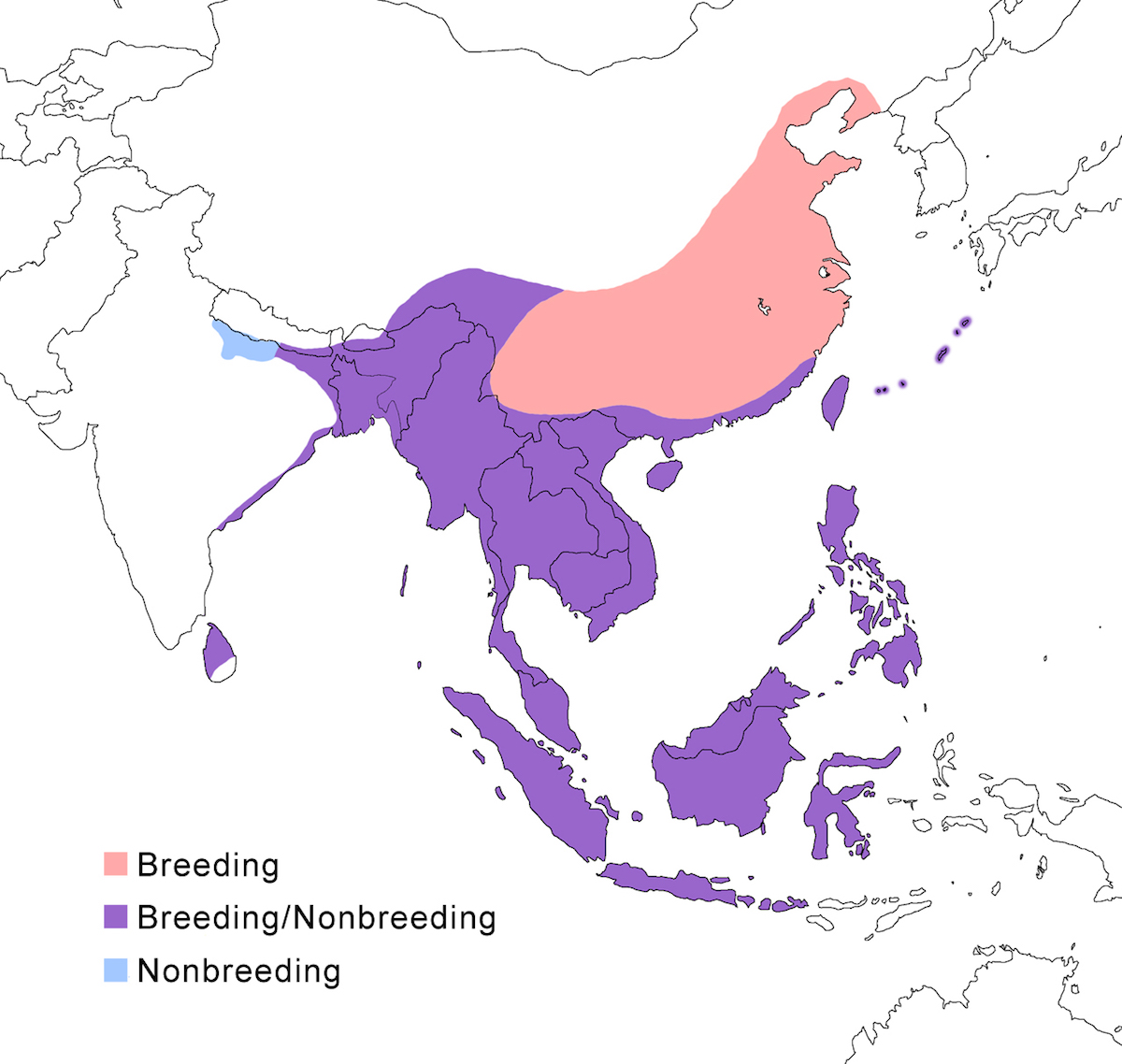 This is a rice paddy heron. It occurs especially in rice fields, but also drainage ditches in coconut plantations, reed beds, rank grass and scrub bordering marshes and lakes, grassy areas and coastal mangroves. It occurs along the coast but also up to 1,800 m in the wetlands of the Himalayan foothills. It occurs in grassy and marshy areas near human habitation.

The Cinnamon Bittern feeds by Walking Slowly. It also feeds by taking insects by Standing Flycatching, Head Tilting, Peering Over and Head Waving (Lansdown and Rajanathan 1993). It is solitary forager. It is primarily crepuscular (Lansdown 1988) but also feeds at times during the day. On alert it assumes a Bittern Posture. It is not overly shy, and will feed in rice paddies with human workers. It does often choose to roost during the day. Its diet includes insects, mollusks, frogs and fish. Its food is relatively large.

It nests primarily in reed beds and rice fields. It also nests in bamboo, bushes, or flooded trees. Nesting has been found on the ground in southeast China, and at the base of grass tussocks. The nest solitarily, in small loose associations, and near mixed colonies, including Cormorants (Phalacrocorax), Cattle Egrets and Black Bitterns. The nest is small, made of small sticks, sedge, reed or Pandanus leaves, lined with a few dead leaves or fine grass. They are situated low, about 1 m or so above the water.

The male advertises with a Stretch display. The bird positions himself on rice plants, a bush or tree. The bird stands straight, the color the base of the bill flashes bright orange, it crouches low, bill tilted upward, exposing the neck tuft of plumes. The head is lowered and it gives a Kok call. Between active displays, the bird Preens and rubs its head against powder down tracts. It also does Circle Flights with stiff beats and also a display in which he flies up to females with a deep flapping flight and giving Kok or Keuch calls (Lansdown 1988). It also gives the Kwok call when it alights at the end of Circle Flight. It defends its nest site with a Forward display.

Eggs are white. Their size is 33-36.5 x 25.5-26.4 mm. Clutch is 3-4, with a range of 2-5 eggs. Eggs are laid at daily intervals. There is no evidence of double- brooding. Incubation is apparently by both sexes, starts with the first egg. Incubation period is unreported. Young hatch asynchronously and growth is fast. Young can clamber from the nest at 10 days. Nothing is known of fledging periods.

Nothing is known of the population biology or demography of this species.

This is a species that is widespread, locally abundant, and well adapted to human-altered environments. It is hunted in peninsular Malaysia (Lansdown et al. 2000).

Understanding the breeding biology of the Cinnamon Bittern is at an early stage. Additional information is needed on the biology, behaviour, and population biology of this species.

This is not a well-understood heron, despite being relatively easy to observe. It feeds in rice fields and other open herbaceous wetlands by Walking slowly stalking prey, taking invertebrates and relatively large fish. It has a substantial repertoire of behaviours to use in locating and capturing prey and can also make use of a variety of habitats, especially agricultural situations. Much remains to be learned.