The Cocoi Heron is a large grey heron with white neck and black cap.

Adult: The Cocoi Heron is a starkly grey, black and white bird. The crown is entirely black to below the eye, but may be paler on the forecrown. Head plumes trail the cap. The bill is dull yellow, a little paler below and with a blackish base. The irises are normally yellow and the lores blue. The neck is markedly white. The bird’s dominant color is the grey of the back and wings, with a black “shoulder” patch that shows when standing. The thighs and undertail also are white. Belly is black as are the legs and feet. In nuptial plumage, the bills turn bright yellow with a strong red tinge at the base, and the legs turn dusky pink.

Variation: The sexes are alike. No subspecies are described, but southern birds are larger than northern birds.

JUVENILE: In immature birds, the lower underparts are ashy streaked with buff, and the neck has an ashy tinge. The thighs and under tail are streaked dusky. The distinctive cap is present but is a duller black or grey, paler on the forecrown and lacks plumes.

Chick: The downy chick is grey and shows the contrasting darker color of the cap.

Voice: The “Raab” call is its principal call, rendered “rraahb, rraabb”. It is similar in function to the Frannk call of the Great Blue Heron. The rest of the vocal repertoire remains to be characterized.

SYSTEMATICS: This is a distinctive bird, related to the Grey and Great Blue herons. There is likely more geographic variation than has so far been described. The alternative English name, White Necked Heron, is not usable in that it is used for another species.

The Cocoi Heron is a South American species.

Breeding range: The Cocoi Heron nests north to Columbia and Venezuela. It is a year round resident in extreme southeast Panama, but breeding has not yet been documented. It nests south throughout most of South America south to Chile (Aisen) and Argentina (Chubut), excluding the Andes.

Nonbreeding range: Generally the species occurs in its breeding range during the nonbreeding season. But it is found in Trinidad from August to June and more rarely in Tobago from January to June (ffrench 1973, Hancock 1999, F. Hayes pers. comm.).

Migration: Although usually considered rather sedentary, it is expected that southern Cocoi Herons probably undertake movements to escape the southern winter and post nesting dispersion should also be expected. Evidence is scanty. Occasional appearances of this heron in the far south of Chile, on the Falkland Islands and Fernando de Noronha (Nacinovic and Teixeira 1989), suggest post-breeding dispersal.

Status: The species is widespread and common throughout its range. Its population center is the northern and central part of the continent (Morales 2000). It is scarce or absent along the west coast from Chile to Ecuador. It is patchily distributed in some areas and in some seasons, but the reasons are not clear (Morales 2000). It can be very common in certain habitats, such as in the Venezuela llanos. 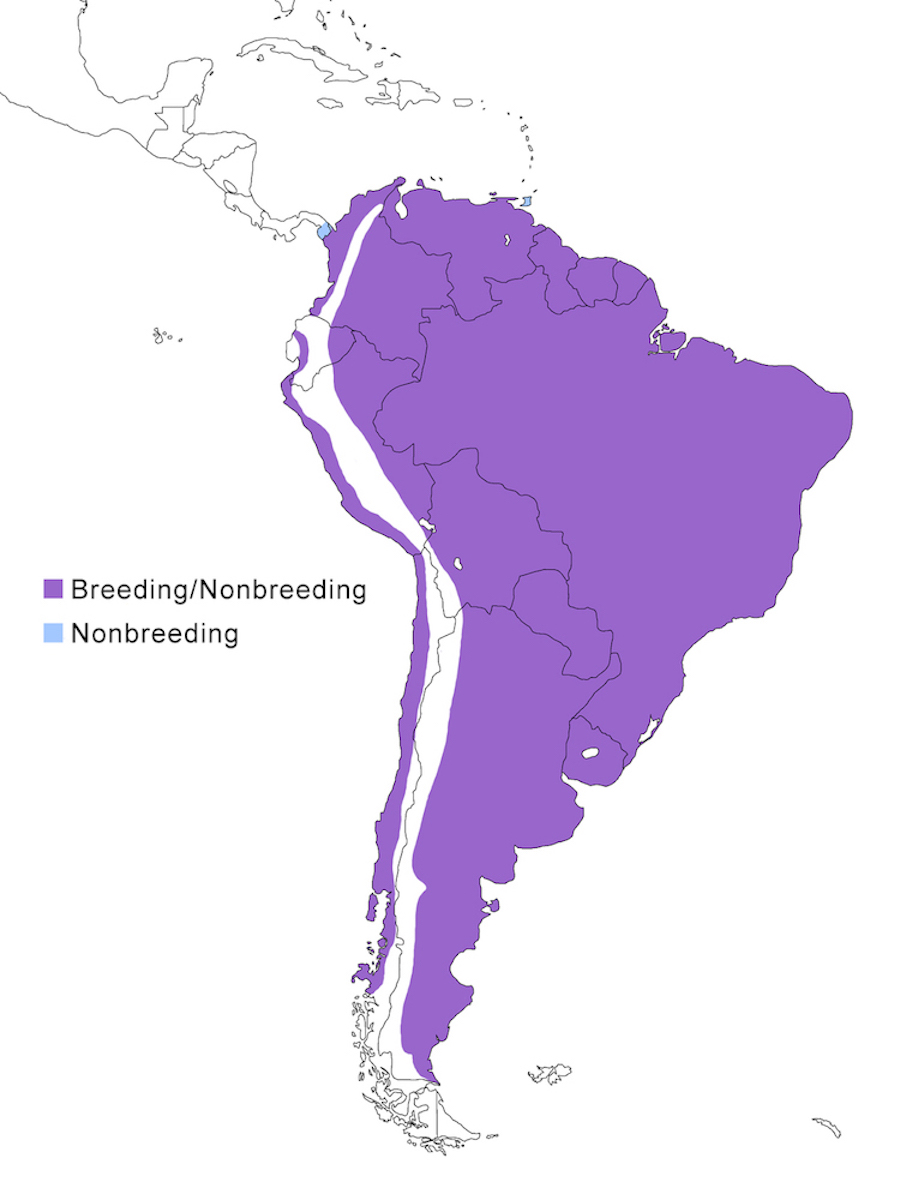 This heron is a bird of natural wetlands, fresh or salt, grass or forested. It feeds in shallow to deep water along lake shore, river, estuary, beaches, forested rivers, small steams, grassy marshes, swamps and other wetlands. Although a bird of lowland wetlands, it can be found as high as 2,500 m (Borrero and Cruz-Millan 1982).

This species feeds in typical large heron fashion, primarily by Standing and by Walking slowly between standing sites. It uses Head Tilting for better vision. It feeds both day and night. Additional descriptive details of foraging are needed.

It generally feeds alone and defends its feeding territory. It also joins large mixed species aggregations, especially during the drying season. In such situations it not only forages for itself but also robs prey from other species, such as Wood Storks (Gonzalez 1996).

Its diet is primarily large fish, but it also eats frogs, the larvae of aquatic insects, and carrion. Fish can be up to 30 cm long (Borrero and Cruz-Millan 1982). It probably has a broad diet, for example eating dead crabs.

The nesting season starts in July in Surinam, October in Uruguay, and November in the Buenos Aires. It nests in swamps and other protected sites, apparently preferring large trees 20-25 m tall (Borrero and Cruz-Millan 1982). But it may nest in bushes primarily, reeds or even cactus. It may nest solitarily or in colonies of single or mixed species (Parera and Bosso 1996). As many as 400-800 breeding pairs used a coastal colony in Surinam (Spaans and de Jong 1982).

Nests are made of twigs, dry thistles, and reeds lined with grass. Nests are roughly circular, 65 cm (26 in) in diameter and very deep. In a reed swamp, they were supported by Zizaniopsis reeds and were only 30 to 40 cm above the water. It took about seven days to build a nest (Borrero and Cruz-Millan 1982).

The Cocoi Heron is widespread and common over most of its range, more so in the north than the south of South America. There are no known com. pelling conservation issues at present. It is thought that contaminants, especially pesticides, could affect them, but this remains to be documented. Most critical is habitat alteration over much of its range. It appears to prefer natural over artificial habitat, and these natural habitats need to be maintained.

Although this species is large, obvious, widespread, and common, surprisingly little is recorded on its general biology. Basic studies of its biology are needed. Given the extensive knowledge available for Great Blue and Grey Herons, studies should be relatively easy to design and carry out. Especially important is a better understanding of its foraging habitat requirements. The migratory or dispersive tendencies of various populations need to be understood.

The Cocoi Heron is a large, generally solitary bird that feeds principally in grassy marshes and other wetland situations. Typical of the large herons, it is a patient feeder, foraging alone and defending its territory from other herons. But when prey is abundant, it joins into aggregations and feeds socially. As is typical of the other large Ardea, it feeds on a wide variety of prey, some rather large. But much remains to be documented about this abundant and conspicuous species that could well serve as an emblematic species of South American wetlands.