The Dwarf Bittern is a very small, dark heron with dark and buff stripped throat and under sides.

Adult: The male has a dark slate grey head and neck, with elongated head and neck feathers. Bill is dark. The upper bill is black to dark green. The lower bill is yellow. Lores and orbital skin are blue to yellow green. Irises are red brown to dark red. The back, upper wings and other upper parts are dark slate grey. Its throat and upper breast are pale buff, darkening to tawny on the abdomen, heavily streaked black. Legs and feet are green yellow in front and yellow in back. In courtship legs and feet turn bright orange.

Variation: The female is paler, with a more rufous tinge on its belly and yellow irises.

Juvenile: The immature bird is more buff and pale than adult. The buff tips to the wing covert feathers. Its under parts are more russet. Its foreneck has narrower streaking. Bill is dull yellow grey. Irises are orange red and the legs and feet are yellow.

Chick: The down of the chick is ginger brown, slightly longer on the crown creating a crest. The irises are dark brown. The skin, bill, legs and feet are pink.

Voice: The voice of this species is little known. A loud croak is uttered when disturbed.

The Dwarf Bittern is identified by is uniformly dark upper sides, streaked under sides, and yellow feet. Its flight is slow and labored. The bird is most often encountered flying into the bushes when disturbed.

The Dwarf Bittern is one of the small bitterns, Ixobrychus, which share similar plumage, white eggs, scutellate tarsi, and ten tail feathers. The species is unusual among the small bitterns in having only a slight sexual dimorphism. It was once placed in a genus of its own (Payne and Risley 1976).

The species ranges throughout much of Africa south of the Sahara, except for deserts.

Migration: This is a migratory species within Africa, particularly in the north and south. Movements of equatorial birds are less clear. Birds occur in South Africa in the November–April wet season. In the dry season, birds from both north and south the migrate toward the equator (Brown et al. 1982). The species does wander outside its usual range, including further into South Africa (Ingram 1998), Canary Islands, and France.

Status: The species is widespread but rare to uncommon range wide. It does become more obvious and common at breeding sites, such as in Namibia, and south Angola. 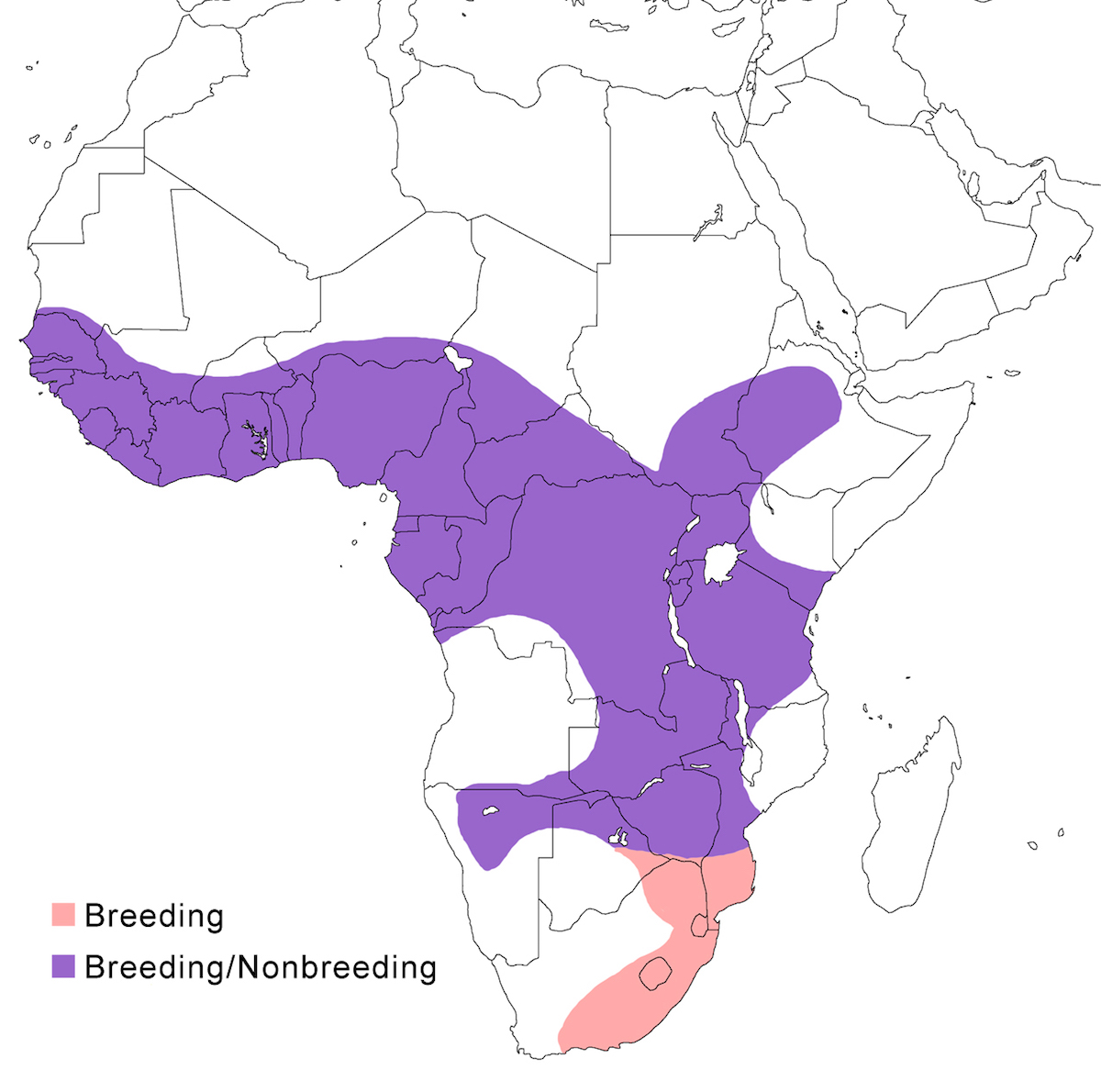 The Dwarf Bitter uses a variety of habitats, but generally characterized by fluctuating water levels. Habitats include the margins of flood plain rivers and seasonal pans. It also uses fresh water river pools and, especially, edges of creeks, rivers and streams overhung by dense foliage, rice fields, roadside pools, open grassy swamps, lake islands, cat tail marshes and papyrus. It nests in thickets and trees, such as Combretum, Ziziphus, Terminalia, and Diospiros (Hustler and Williamson 1985), near its feeding area.

Dwarf Bitterns feed solitarily or in pairs, hunting by night and ,especially if it is cloudy, by day. This it does silently and unobtrusively by Standing and by Walking Slowly. This daily schedule overlaps availability of frogs (Tarboton 1980, Hustler and Williamson 1985). Dwarf Bitterns sometimes prefer to sneak through vegetation and reeds rather than climb or perch on them. When disturbed they stay put at the water’s edge in an exaggerated version of the Bittern posture or it often fly up into trees moving only short distances. It is likely that individuals defend feeding territory, and its use of a Forward display has been described (Riddell 1987).

Insects, such as grasshoppers and water bugs, spiders, small fish, crabs, snails and frogs form the main items of the diet. Local populations specialize in grasshoppers and frogs, and can take advantage of seasonal prey availability such as frogs in fishless seasonal pans (Hustler and Williamson 1985).

Breeding season is highly variable geographically. It nests primarily in the rains, but in some places in the early dry season. Nesting begins in September in Senegal, July in Sierra Leone and Ghana, August–October in Mali, December–January in Zaire, May–June in Kenya, January–March and September–October in Zimbabwe, February–March in Namibia, and January–April and September–December in South Africa.

It nests along the margins of flood plains, usually when the water inundates the forests. It appears to prefer thicket vegetation in which it nests solitarily or in small groups. Although not usual, they have been seen to nest near Squacco Heron and Rufous Bellied Heron. The nest is a platform of twigs lined with coarse grass, 23 x 38 cm across and 7 cm deep. The nest is placed near the central trunk of the tree, on a branch or in bushes overhanging the water. Height is 0.5-4 m above the water. They often use thorn bushes for nesting. It builds its nest quickly (Tarboton 1980).

The young are fed by regurgitation in the evening. They develop quickly. At seven days they leave the nest if disturbed, but return. When fully feathered they wander widely. When sitting on a branch, they adopt a Bittern Posture and are hard to see. In one study only 69% of eggs hatched (Hustler and Williamson 1985).

There is no information on population biology or demography of this species.

The species is uncommon but also is widespread. Information is limited, and the most important conservation measure is to increase our knowledge of the species.

The biology and behaviour of the species is relatively unknown. There is a particular need for a better understanding of its seasonal movements and its nesting and non-breeding distribution. The suggestion that this is a species adapted to take advantage of ephemeral food resources made available by rain and fluctuating water levels should be studied further. This is a species for which a satellite transmitter study of individual birds could provide important information to clarify its continent-wide movements. Seasonal, individual, sexual, and developmental changes in soft-part colours are poorly understood. Additional study is needed to assess these individual differences.

The Dwarf Bittern is a forest bittern, and one that appears to be to take advantage of ephemeral food supplies. One such habitat is seasonally flooded pans, which dry out in the dry season. When the rains come, birds find the pans. The bitterns build their nest and lay the clutch quickly, have a short incubation period, perhaps synchronous hatching, and chicks develop quickly and soon leave the nest. This nomadic tendency allows it to take advantage of both the predictable and unpredictable weather patterns that characterize Africa.