The Eastern Reef-Heron is a medium dimorphic (dark or white) egret with short yellow green legs and a thick bill, seen along ocean shores throughout Australasia.

Adult: The Eastern Reef-Heron is a variable species. plumage shade varying among individuals. The dark morph is slate grey to brown grey, with differing amounts of white feathers on the chin and sometimes streaking under the throat. The white morph is white, although sometimes with dark streaks. Intermediate forms occur.

In all forms, the irises are bright yellow. The bill ranges from dirty yellow to dusky to grey brown, with a dusky horn bill tip and, sometimes, lighter lower bill (see photo in Hancock 1999). The lores are yellow green. Under wings of dark form are dark without contrast. The stout, relatively short legs are highly variably colored, including yellow, grey yellow, green yellow to brown yellow and in combination of dark in front and lighter behind. Most birds have some dark pigment on the front of the tarsus, but this is variable (Edger 1978). In some, the yellow of the feet extends up the lower tarsus. The feet are yellow green with bright yellow soles that are prominent in flight.

In breeding the Eastern Reef-Heron develops conspicuous plumes. The small crest is made up of a tuft of short lanceolate plumes. Lanceolate plumes also occur on the foreneck and back. The bill and legs turn yellow. No clear information indicates changes in lore color during nesting.

Variation: Variation in the species includes polymorphism, sexual dimorphism, and geographic variation. Males are larger than females. White and dark birds occur over most of the range, with a greater proportion of dark birds toward the north and south extremes of the range and the white morph being more common in the tropics, perhaps associated with coral reefs (Itoh 1991). Geographic variation occurs in size and in coloration. Abolineata has longer wings and its bill may be partly black. The amount of chin striping differs being most pronounced in Indonesian birds and absent in some birds in the south and east of the range. Birds in Australia are darker than those in Indonesia. In New Zealand, with one exception (Crossland 1992), only grey birds have been reported. Considering this species to be dimorphic does not adequately cover its range of variation. Birds in fact vary from dark grey, to mottled grey to white. Much remains to be deciphered with respect to patterns of variation in this intriguing species.

Juvenile: Juveniles of the dark morph are pale smoky-grey. White-morph juveniles are white.

The most reliable features that identify the Eastern Reef-Heron are somewhat subtle: its relatively thick bill, its short legs relative to body size and a resulting squat, haunched posture. Its flight has a labored take off extending through short flights. On longer flights, it has more rapid wing beats than most herons, with its neck coiled back, its legs extending beyond the tail showing the yellow footpads, flying close to the water and gliding to a landing. It is also characterized by its feeding location on rocky shores and reefs.

The white form of the eastern Reef-Heron is distinguished from the Eastern Great Egret and Intermediate Egret by its smaller size, yellow (not black) legs and feet, shorter lanceolate plumes, and haunched posture. It is distinguished from the Little Egret/Western Reef-Heron by its thicker build, thicker bill, short legs, haunched posture, and yellowish legs and feet. During breeding, the white form is distinguished from the Chinese Egret by its thicker bill, shorter legs, shorter and thicker crest plumes, shorter back plumes not reaching the tail, and yellow legs. During nonbreeding season distinguishing the two species is difficult in that soft part colors overlap, but the Chinese Egret never has a dark bill tip and only the toe pads, not the entire foot, of the Reef-Heron are yellow. The two species remain distinctive in relative leg length, posture and behavior.

The dark form of the Eastern Reef-Heron is identified by the lack of white in the plumage (except for the usually inconspicuous white chin), its uniform grey wings in flight, and yellow foot pads contrasting with less bright feet. It is distinguished from the White Faced Heron by is dark head, thicker and haunched over posture. It is distinguished from the great herons by its much smaller size, and other plumage characters.

This species is one of the dimorphic medium Egretta. Study of the species relationships among birds in this group is needed. This is a widespread, sedentary, variable species, having numerous island populations. Unless it is a fairly recent invader of these islands, additional geographic variation patterns would be expected. Alternatively, the characteristics of albolineata may be well within the range of variation overall.

The species is widespread in coastal east Asia, Australasia and Oceania.

Breeding range: It ranges from Korea and Japan (Yamagata and Miyagi Prefectures) through south east Asia to Bangladesh, Andaman and Nicobar Islands (Lansdown pers. comm.), south around Australia to New Zealand, east through Polynesia as far east as Marquesas and Tumotus. Albolineata is found on New Caledonia and Loyalty Islands. Within this range, it is extremely coastal, its inland record being 100 km in New Zealand.

Status: Given it extensive, linear range, it is not possible at this time to estimate the global population for this species. In the north and tropics, it is widespread with no sign of population decreases. Breeding appears to be relatively rare in Australia and populations in south Australia, Tasmania and New Zealand have declined in the last century. 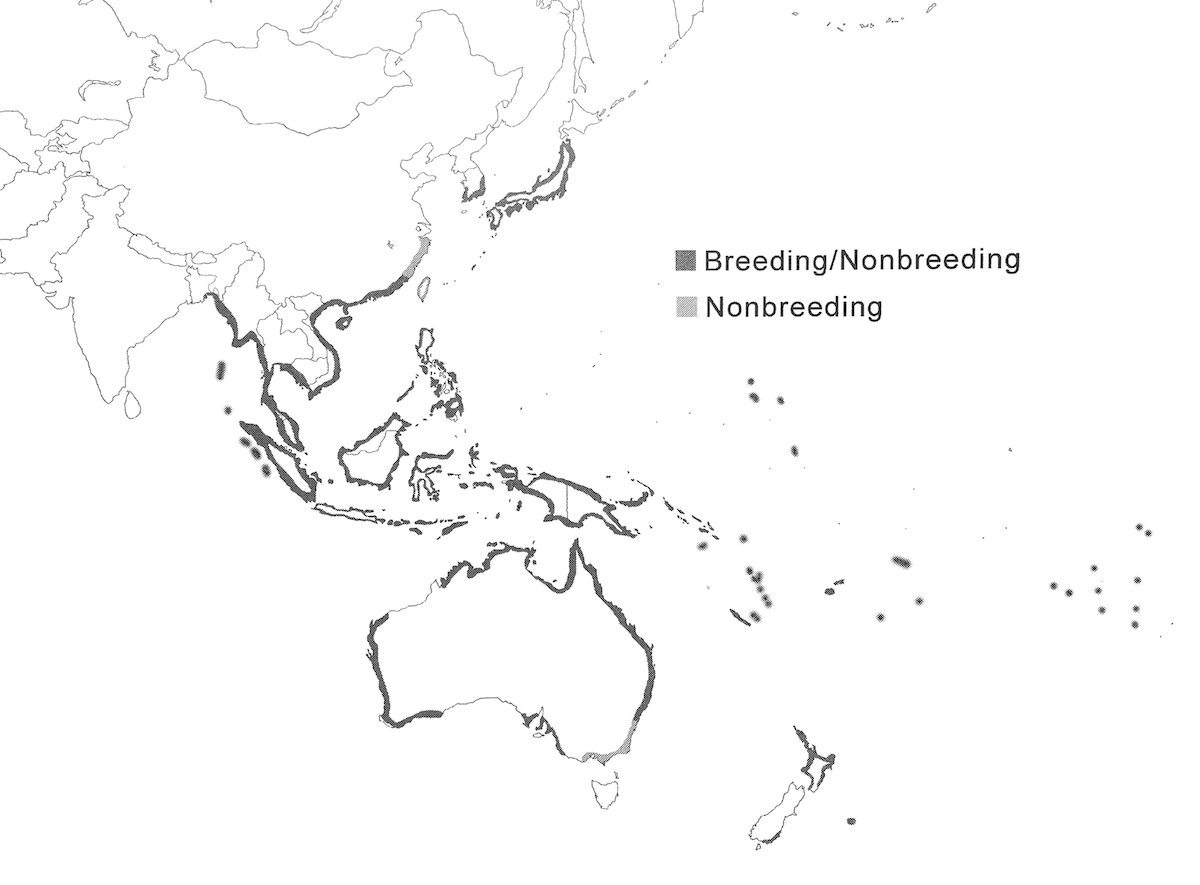 This is a species of the ocean shore. Its usual habitats are islands with rocky shores or shallowly flooded coral reefs. On the mainland and larger islands it prefers sheltered islands with rocky shores with near by reefs. It also uses mangrove-lined shorelines, inter tidal mud flats, beaches, tidal rivers and creeks. It occurs inland near the coast using lake edges, fields, freshwater marshes, rice fields, and garbage dumps.

The Eastern Reef-Heron is overall not gregarious and is highly territorial species (Recher 1972, Recher et al. 1983). It typically feeds alone, in pairs, or small family groups, defending its patch of reef or shore. It uses Alert display, Forward display, attacks and fights to defend its site. On occasion when food, especially small fish, is abundant, reef herons will feed in aggregations. They feed both by day and night, principally depending on tides, feeding on the outgoing and low tides. Many studies of the foraging attributes of morph color are inconclusive (Murton 1971, Recher 1972, Holyoak 1973). However, the differences in foraging have been shown, particularly in habita choice and in feeding behavior (Harvey 1975, Rohwer 1990). For example, white-phased birds tended to feed in the surf whereas dark birds feed by actively running and walking on the reef flat.

It typically feeds actively by Walking slowly in its characteristic deeply Crouched posture. This posture is distinctive, more hunched over than most herons and flattened nearly to the substrate. The posture, achievable because of its short legs, allows it to stand on rocky shores, reefs or walk in very shallow water while keeping close to the water and having a low, less distinct profile. It also Walks in a less Crouched with head and neck retracted, or in Upright posture. It will interrupt its Walking slowly to Walk Quickly, Run, Hop or fly at a prey item. It periodically assumes an Upright posture to scan for prey.

It fishes visually, Stabbing rapidly and repeatedly at fish it sees. It also Lunges at fish, sometimes flapping its wings to travel up to 2 m from its perch to lunge at the prey. On shore it feeds by scavenging, searching under and turning over leaves, by Robbing nesting terns, and by eating tern chicks out of a colony. When not feeding and at night, it roosts alone, in small groups, or in mixed roosts near its feeding sites (Ewins et al. 1990). They use the rocky shore, trees, bushes, docks, breakwaters, piles, and even boats.

The diet primarily is small fish less than 25 mm long, and also small crabs, and mollusks (Recher and Recher 1972). Fish include mudskippers, gobies, blennies, damselfishes and other coral or bottom-dwelling species. It eats insects, lizards, and small birds such as tern chicks.

The Eastern Reef-Heron is a sporadic asynchronous breeder over most of its range. At the north and south it its range, it nests in the primarily in the spring, May–July in India and Malaysia and September–December in New Zealand. It nests year round in Australia and probably also on various Pacific Islands.

It nests on islands, rocks, and coral cays near feeding sites. It uses sheltered sites for nests, on the ground, among rocks, within low vegetation, in small trees, or bushes. It can nest near humans, and has been observed nesting under a pier. The species is highly territorial and often nests solitarily. It also nests in small colonies of 20-200 pairs. The nest is flat platform made of sticks with leaf stalks or grass, 40 wide, and a few cm high.

Little definitive has been recorded of the courtship displays, perhaps indicating re-bonding by long standing pairs. The eggs are pale greenish-blue and measure 43-44.8 x 33.3-35 mm. Clutch is 2-6 eggs, usually 2 or 3, but 3-4 in the Andamans, 3-5 in Japan, and 4-5 in Australia. Likely successive clutches of 6 were fond in Sarawak. Both parents incubate for a period lasting 25-28 days. The young are brooded by adults for a few days and then gradually left unattended during the day. They are fed by regurgitation. Chicks leave nest in 3 weeks and hide nearby. Fledging probably takes about 50 days. No information available on success.

Nothing is known about the population biology of this species.

The Eastern Reef-Heron is widely distributed on many islands and along the coasts of New Zealand, Australia, Sumatra, and Thailand. It has very specific habitat requirements, rocky and sandy shores. It is rare and declining in China, where coastal development, siltation and pollution have adversely affected its specialized habitat (X. Chen, pers. comm.). It is adaptable to human presence, using artificial structures for roosting and even nesting. It tolerates nonaggressive human interaction on islands. However, coastal development and aggressive disturbance may adversely affect it (Domm and Recher 1973). Populations in southeast Australia and New Zealand have declined in the past century (Edgar 1978, Peter 1995). This likely is not attributable to disturbance or development, as much as to climatic factors operating at the edge of the range of an otherwise tropical species.

The pattern of geographic variation in this species deserves additional and more geographically complete studies. Determining densities over a range of habitats could be the basis of extrapolating a global population estimate. Surveys should be undertaken over its range to define important conservation areas for the bird.

The Eastern Reef-Heron is a marine bird. Its principal habitat is not mainland shores but islands, where it uses rocky shores and rocky reefs to search for prey exposed as the tide recedes. It has a distinctive feeding posture and concomitant morphology to exploit an environment unique for herons, namely the tops of exposed coral reefs. It also feeds in other shoal habitats especially sandy shores, using a variety of techniques as appropriate. It is a fish and marine crustacean specialist. It likely benefits from knowing its feeding site well, and so is a fierce defender of its territorial prerogatives. It is sedentary in most places, and likely has persistent pairing. It has a small clutch size and long breeding season, likely an adaptation to the uncertainty of food availability along coral reefs, a difficult feeding habitat for a wading bird.