The Fasciated Tiger-Heron is a medium, cryptic, slate colored heron with fine buff barring on its neck and body.

Adult: This tiger heron has a black crown and the side of its head is slate barred with black. The bill is short, heavy, slightly down curved, and dark. The upper bill is black with horn tip. The lower bill is horn at the tip, dark near end and yellow green toward the face. The color of the facial skin (lores and skin at the base of the bill) is variable. The lores are yellow to black, perhaps changing seasonally. The skin at the lower gape is yellow to yellow green. The irises are yellow. The neck and back are slate black to black brown with narrow, widely spaced pale buff barring, with the buff of the lower neck more distinct than the back. The Fore neck and breast are white streaked with brown. The belly is tawny or rufous. The flanks are grey uniformly. Under wings are indistinctly barred slate and white. The legs are brown.

Variation: Sexes are alike. Geographic variation is notable. Fasciatum has long wings and tail and darker rufous abdomen, and its throat feathering extending a short way over the base of the lower mandible, as in the Rufescent Tiger-Heron. Salmoni is smaller and lacks mandibular feathering. Pallescens is larger and paler, especially on the abdomen.

Juvenile: Juvenile birds go through several plumage stages over the four years of immaturity. The juvenile initially is broadly banded black and buff. The striping becomes narrower with age with darker black and lighter buff bands.

Voice: The voice has not been described.

The Fasciated Tiger-Heron is identified by it small size, dark head and neck, its robust bill, darker crown, white throat. It is distinguished from the Rufescent Tiger-Heron by being slightly smaller, with shorter tarsi, its short, slightly down curved and robust (not straight and narrow) bill, its barred (not chestnut) head and neck, its uniformly grey (not banded) flanks, its tawny (not grey and ochre abdomen), and by its higher (not lowland) habitat choice. It is distinguished from the Bare Throated Tiger-Heron by it smaller size, feathered white throat, and dark sides and under parts. In the early broad-barred plumage stages, juveniles are very difficult to tell from juvenile Rufescent Tiger-Herons. It is distinguished with difficulty from the Juvenile Rufescent Tiger-Heron by its smaller size, arched and thicker (not thin and straight) bill, thicker appearance, generally less strong patterning, and in hand by distribution of powder down patches.

The tiger herons are a distinctive lineage of the Ardeidae, adapted to a forest existence. The five species constitute a sister group to the other herons and bitterns and to the Boat Billed Heron (Sheldon et al. 1995). Subspecific variation is well documented in the Fasciated Tiger-Heron. The northern and southern races have been considered separate species.

The Fasciated Tiger-Heron occurs in Central and South America, south to Argentina.

Migration: Like all Tigrisoma tiger herons, this species is basically non-migratory but juveniles undertake dispersal. In Peru they move to the temperate zone up to 3,300 m into semi arid valleys.

Status: This is a species of naturally low density and perhaps patchy distribution. It is rare and patchy in Central America through Colombia. It is expanding its range into the mountains in Costa Rica due to the increase in artificial fishponds (Alvarado pers. comm.). It is rare in southeast Brazil. There is no information on numbers, and information on its distribution is not complete (e.g., Yamashita and Valle 1990). Its apparent rarity and lack of data makes knowledge of its status uncertain over most of its range (Morales 2000). 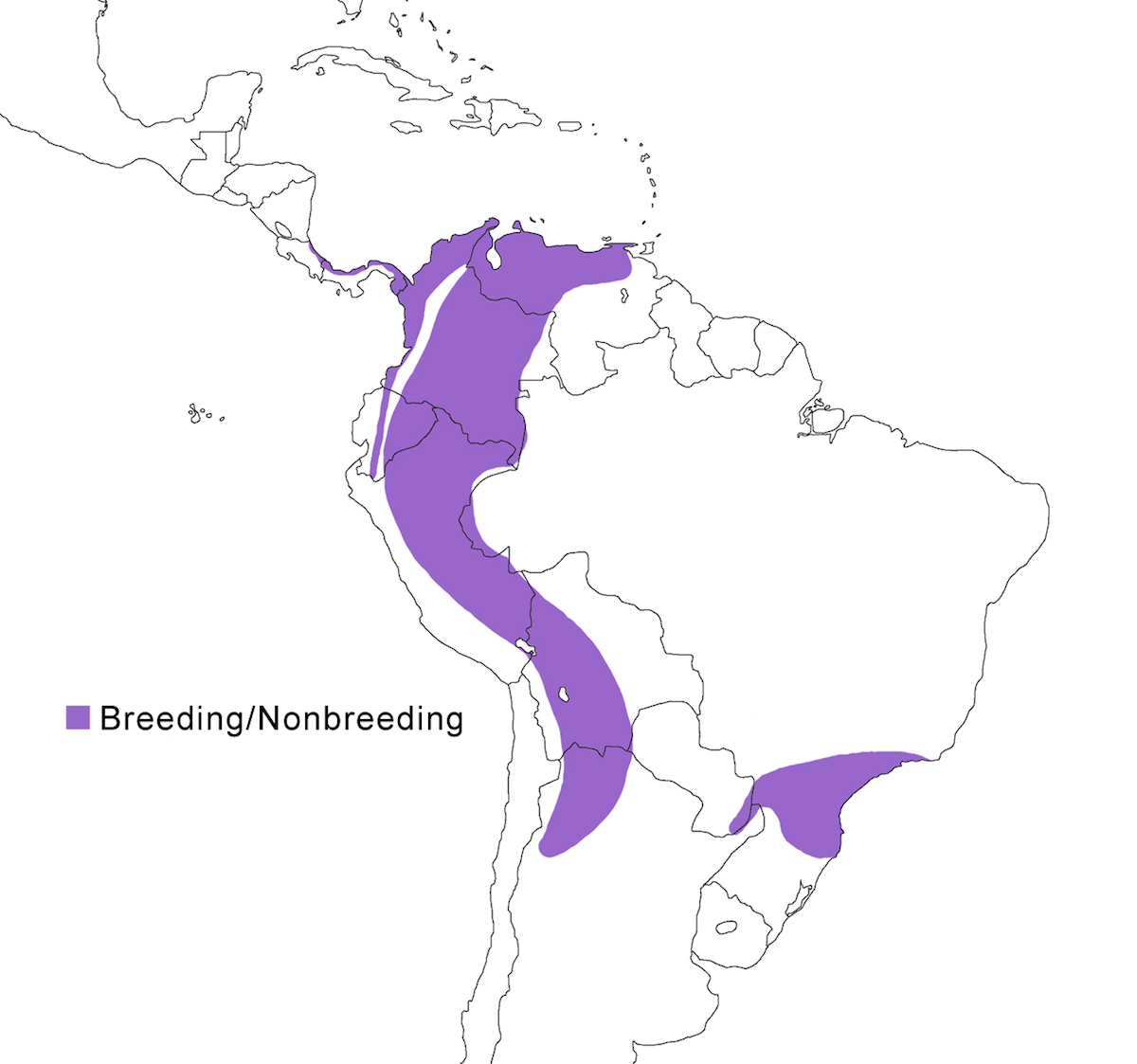 This is a bird of fast flowing streams of mountains and foothills, in contrast to the Rufescent Tiger-Heron, which is its equivalent in lowland streams. It occurs the eastern length of the northern Andes, up to 3,300 m in Peru (Fjeldsa and Krabbe 1990), where it occurs along rapidly flowing, forested streams. In Central America, it occurs on the well-watered Caribbean slope in forests up to 750 m. In Colombia, it occurs along mountain streams up to 1,539 m. The southern race is found in forested hill country, and in more open forest (Yamashita and Valle 1990).

The Fasciated Tiger-Heron is a solitary species, feeding. It Walks slowly along the banks of fast flowing rivers or along mid river gravel beds. It also Stands very stilly waiting for prey on river rocks, from the bank or on gravel or sand bars. It feeds in the open, not necessarily under tree cover, but nonetheless is not very conspicuous (Ridgely and Gwynne 1993). It is not clear if the species feeds by night or by day. Virtually nothing is known of its diet, other than it eats fish and insects. It is likely that in such fast flowing streams fish are the principal prey.

Virtually nothing is known of the breeding biology of this species.

Similarly, nothing is known of its population biology or demography.

The rarity of this species and the lack of knowledge of its distribution, numbers, trends, and basic biology make conservation extremely difficult. Streamedge forests are a vulnerable habitat, and it is likely that the heavy deforestation and urbanization of its range are threats to its population stability and likely have led to decreases (Morales 2000). It is thought to require pristine, low nutrient streams (Yamashita and de Paula Valle 1990). If so, the situation is of particular concern because these are in severe threat from siltation and other results of watershed disruptions. It is considered to be near Threatened (Hafner et al. 2000). Conservation action first requires better information on its distribution and habitat requirements, and then implementation of plans for conservation of its upland forested stream habitat.

There is almost no information on food, details of foraging behaviour, or territorial structure, and nothing on its breeding biology. Basic information is needed on the distribution, habitat requirements, and conservation status of the Fasciated Tiger-Heron throughout its range. Study of the biology, distribution, and taxonomy of the apparently disjunct populations is desperately needed to understand its basic biology, habitat requirements, and to clarify specific and the subspecific relationships of these herons.

This is a solitary heron of fast-flowing rivers of the forested hills and mountains sharing habitat with torrent ducks (Merganetta) and mergansers (Mergus). It feeds by quietly Standing or Walking awaiting what are probably rare feeding opportunities. It appears to be uncommon, and likely well dispersed along its habitat.