The Indian Pond-Heron is a small drab brown, or in breeding pink buff, heron with pure white wings and rump visible in flight.

Adult: The nonbreeding adult Indian Pond-Heron has a head and neck streaked dark brown and buff. The bill is yellow horn with a long black tip. The lores are green and the irises are yellow. It has drab brown back feathers streaked with buff covering much of its upper wing. The upper wing and flight feathers are white, except the outermost flight feather is dusky, with a brown-grey shaft; the two or three adjacent flight feathers have dusky tips. Its rump and tail also are pure white. Its under parts are white with heavy buff streaking on the breast. The legs and feet are dull green.

In the breeding season, the head and neck are unstreaked brown buff. 3-4 cream white lanceolate plumes extend from the back of the head over the back. The lores and base of the bill are reported as blue or orange, with the rest of the bill remaining yellow and black. The upper parts are pink buff. Long feathers of the upper back and wings are deep maroon. With time these feathers become duller and mottled dark brown when worn. The breast has elongated brown buff feathers. These plumed areas together form a loose coat. The remaining under parts are white, with elongated buff feathers growing from the buff-tinged breast. The legs turn bright yellow, and sometimes show a salmon-pink flush early in the season, apparently well before the nuptial plumes are fully developed.

Variation: The sexes are alike. Individuals vary, perhaps with a geographic component. The herons of the Maldives Islands appear to differ in that the males have a longer, deeper bill, the females have a shorter tarsus, and both sexes have the outermost three or four primaries wholly white. This variation has been recognized taxonomically (phillipsi) but measurements and feather color appear to be within overall variation, and the feather color also varies.

Juvenile: Immature herons are streaked brown, generally similar to non-breeding adults. Their head, neck and breast feathers are shorter, and their back feathers do not form the distinctive loose coat. Their breast is spotted pale brown rather than streaked brown; their upper back feathers may have some dull cream shaft streaks; and the tail may have some faint brown mottling. The bill is darker, the upper mandible ranging to wholly dark and the lower one having yellow only at the base.

Chick: The downy chick is grey, buff and white.

Voice: The voice has not been thoroughly documented. The high-pitched Squawk Call is a flight call. The “Wakoo” call, rendered “wa, koo” is a breeding call. It is described as very human-like.

The Indian Pond heron is identified by its brown coloration in nonbreeding and combination of subtle colorations. It is a drab-looking bird that merges inconspicuously into its habitat but becomes noticeable when its contrasting white wings and tail are revealed in flight. Its flight is fast and agile when taking off and landing in cover.

The Indian Pond-Heron is an Ardeola heron, closely related to the other typical pond herons. Four of the four pond herons (Indian, Javan, Chinese and Squacco) are sometimes considered to be subspecies of Ardeola ralloides.

The Indian Pond-Heron is a bird of south and east Asia.

Nonbreeding range: It occurs but has not been documented to breed in Kuwait and United Arab Emirates (Richardson and Bannon 1991).

Migration: This is a sedentary species. Movements may occur due to local flood or drought event. Dispersal records include Thailand (Boesman 1990, Round 1995b) Saudi Arabia, Oman, and Belgium (Claeys et al. 1994).

Status: It is common in its range in India, Nepal, and Myanmar, and is one of the most readily seen herons in those countries. Little information is available on population numbers. 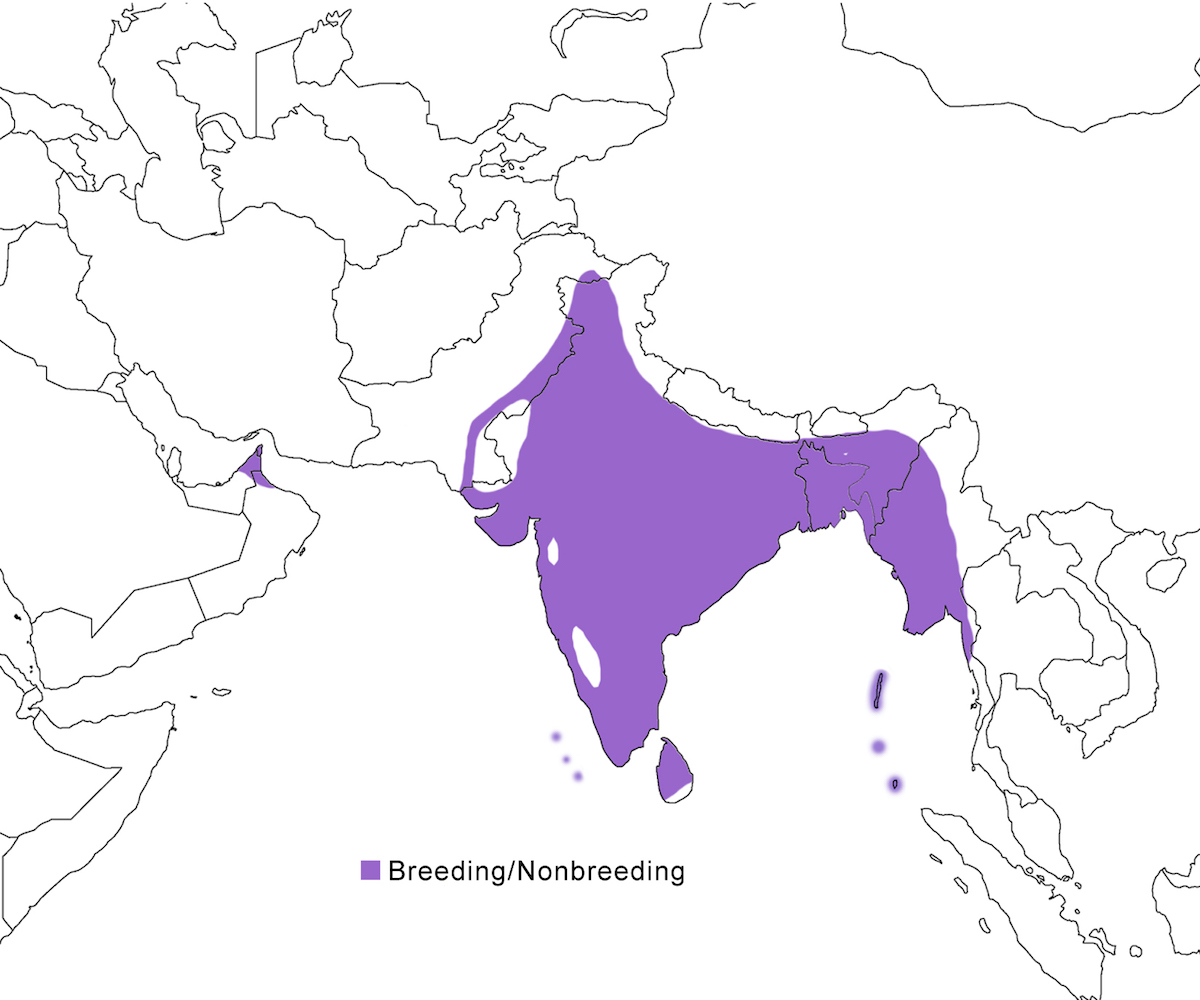 The Indian Pond-Heron uses many types of shallow aquatic habitats, fresh of salt, natural or human made. It appears to somewhat prefer very shallow, nonflowing or slowly flowing situations especially the muddy margins of ponds, jheels, ditches, marshes, rice fields, and irrigated pasture. But also occurs along rivers, streams, lakes, tidal flats, mangrove swamps and reservoirs. It is frequent in human dominated areas, nesting in towns and cities, and takes advantage of feeding opportunities made by human activities. It has been observed to feed in clusters of floating water hyacinth (Eichhornia) (Parasharya and Bhat 1987). It ranges from sea level to 2,150 m in India.

This species feeds primarily by Standing, either in or out of water or mud. It stands for long periods waiting for fish to come into its strike area (Sodhi 1986). It also feeds by Walking, usually with extremely slow and stealthy steps. When Walking, it often uses Head Bobbing (Sodhi 1986). It tends to use different behaviors in different habitats. It feeds by Standing in marshes and other shallow water and Walking along the shallow muddy edges of water bodies and in flooded pasture.

It also uses more active behaviors. It Runs after insects. It uses Bill Vibrating, Diving and Jumping from branches and rocks, Dipping, and Hover Feeding (Grimwood and Brocklehurst 1984 Sodhi 1986, Sivasubramanian 1988).

It feeds primarily solitarily or in small loose groups, as would be suggested by its cryptic plumage (Sodhi 1986). However it also feeds in groups and with other animals. It can gather in large aggregations when food becomes highly available such as in drying situations. Fifty birds were observed at a rice field being ploughed and 15-25 birds at a site of shoaling fish (Grimwood and Brocklehurst 1984, Andrews and Mathew 1997). It follows ploughs eating prey that are exposed and feeds commensally where other species, such as cormorants (Phalacrocorax) are exposing fish. In aggregative situations, territory guarding and prey robbing occur (Goenka and Pandit 1986).

It feeds in morning and late afternoon and roosts during the midday in the shade (Andrews and Mathew 1987). During the mid day roost, it devotes about one forth of its time to preening (Sodhi and Khera 1984).

The breeding season varies with latitude and with the timing of the monsoons. It nests in May–September in north India, December–May in south India and Sri Lanka. Breeding may begin earlier and end later at both ends of the range. It nests in a variety of trees, bushes, and other plants. Nesting sites may be isolated trees, a clump of tress. The site may be over water or even some distance from the water. A great variety of trees are used, including bamboo, willows, eucalyptus (Pandey 1991) and mangroves. They often nest close to human habitation and urban activity and occur in the same colony site for many years.

It generally nests in small single species colonies. But it also nests alone and in colonies with other species of herons, where it assumes peripheral positions. The nest is a very small platform made of twigs. It is placed in a fork of a tree or bush, 2-16 m high. The male collects material and the female does most of the building Very little is reported on the courtship displays of this heron. Because the birds are sedentary and nesting sites are used year after year, it has been suggested that the birds form long-term pair bonds, but this has not been demonstrated.

Eggs are dark blue green, but fade quickly. They average 38 x 28.5 mm, tending to a bit larger in the south of the range. The normal clutch is 4 eggs, range 3-6 eggs. Both parents incubate, lasting 24 days. Very little information is recorded on the latter stages of nesting. The chicks are fed by regurgitation. Chicks can clamber out of the nest when about two-thirds grown. The fledging period of the young is not known. Nothing is known about nesting success.

The population biology and demography of this species has not been studied.

The species is widely distributed and common through much of its range. It is one of the most common herons in its region and has acclimatized well to the human-dominated environment, nesting and feeding in artificial habitats and near rural and urban settings.

For such a widespread bird, its biology has been surprisingly little studied. Its foraging repertoire is large and interesting. Studies are needed of its foraging and breeding behaviour and biology over its variety of habitats and geography.

The Indian Pond-Heron is an abundant and successful species. Using stealthy feeding techniques, primarily Standing alone, waiting for prey to approach. Its cryptic colours during most of the year allow it to feed undisturbed enhancing the effectiveness of its Standing hunting. By concentrating on large dispersed fish but eating whatever it finds and can catch by various means, the heron has a significant dietary scope. It also is prepared to take advantage of various kinds of feeding opportunities, including human activities and food concentrations, and in those situations uses a wider variety of feeding behaviours and engages in interspecific and intra-specific interactions. So this is a species that is specialized yet has a substantial behavioural scope to deal with novel situations, especially those presented by man.