The Javan Pond-Heron is a small brown streaked heron with a golden brown head and black back in the breeding season.

In the breeding season, it has a pale gold yellow head, crest and neck with two long buff white crest plumes. The bill becomes bright yellow with a black ring at or very near the tip and blue at the base. The lores are dull greenish-yellow but the irises turn orange. Elongated slate black back feathers extend to the tail tip. Wings are white and are covered by the back skirt when standing. The plumes of the lower neck and breast and a collar at the lower neck are rufous to cinnamon, normally lacking black feather tips. These plumes extend to the upper belly. The rest of the under parts are white, tinged in orange. The legs are pale yellow, but become green yellow, soon after the eggs are laid, and later dark green.

Variation: The sexes are apparently alike. Geographic variation in the mainland population is recognized by the subspecies continentalis. This population has a longer wing and bill.

Juvenile: Juveniles are streaky brown, like the nonbreeding adult.

Chick: The downy chick is brown, white and grey.

Voice: The typical Squawk call is its flight call. The “Krak” call is the disturbance call.

The Javan Pond-Heron is identified by its pale golden yellow brown head, crest feathers and neck, cinnamon breast, and black back. It flies with slow, short wing beats.

The Indian Pond-Heron is an Ardeola heron, closely related to the other typical pond herons. Four of the pond herons (Indian, Javan, Chinese and Squacco) are sometimes considered to be subspecies of Ardeola ralloides. Infraspecifically, the continental population differs modestly in size and specimens collected out side the breeding season may have been confounded with wintering birds. Details of super specific and infraspecific variation should be re-examined. It is likely that recognition of two subspecies is not justified.

The Javan Pond-Heron occurs in southeast Asia and the East Indies.

Migration: The Javan Pond-Heron is sedentary, but it also occurs where breeding has not been determined, such as peninsular Malaysia (Helbig 1987) and south Sumatra (Verheugt et al. 1993). 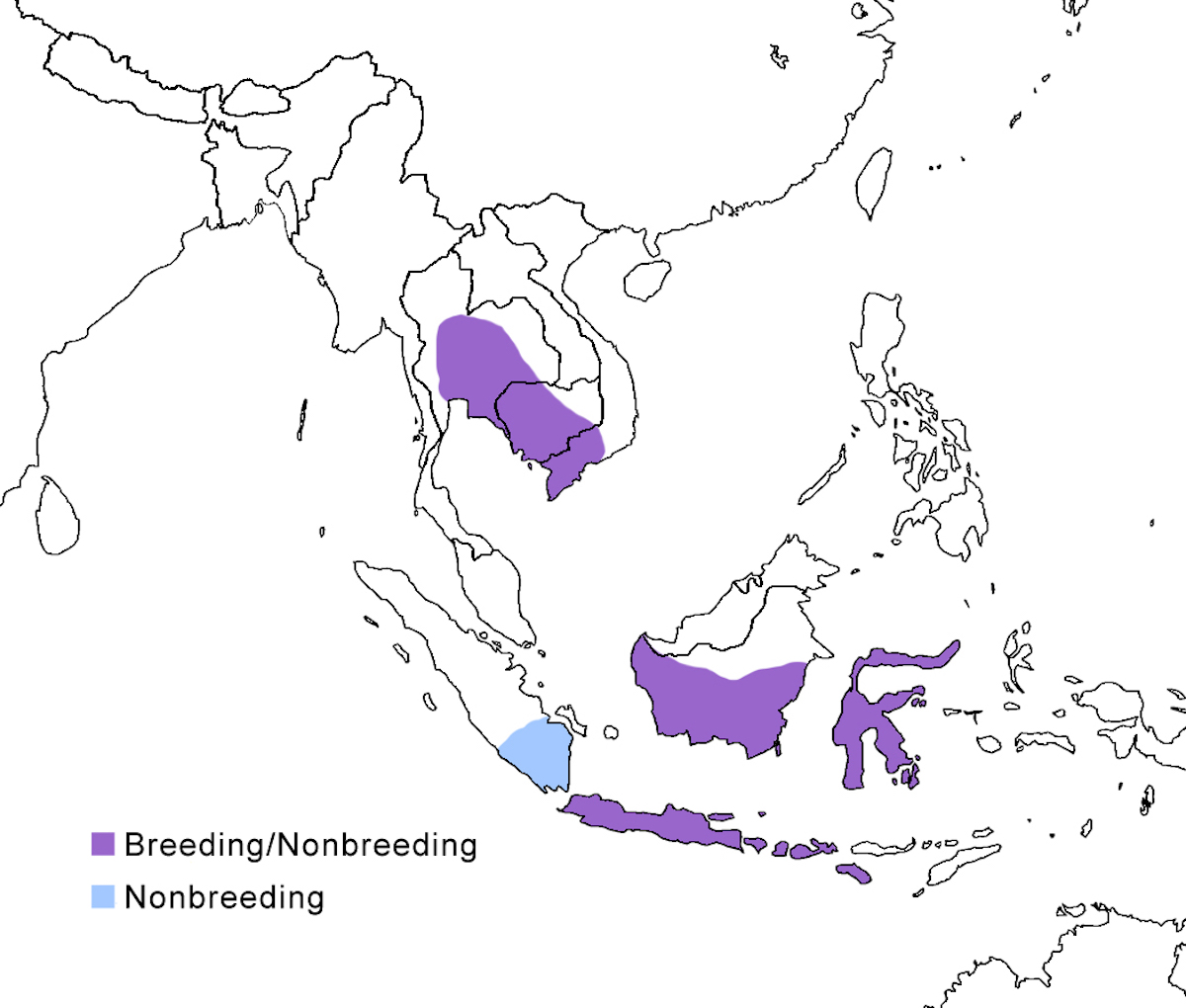 The Javan Pond-Heron is probably most commonly seen and associated with rice fields. It also occurs on a variety of flooded grasslands, marshes, ponds and the margins of lakes. Along the coast it uses mangroves, coastal flats and reefs. It is primarily a lowland bird, occurring from sea level to up to 1,500 m, in Java.

The pond heron feeds primarily by Standing motionless, in low Crouched posture with head retracted. It also feeds by Walking with slow steps. It feeds not only under cover but even more typically hunts in the open. It is diurnal but likely is most active during morning and evening. It primarily feeds solitarily. But it also occurs in small dispersed groups and occasionally in large groups. It flies to roost in the evening in twos and threes.

The diet includes fish, frogs, and insects. Insects include grasshoppers, beetles, ants, and termites. It also eats earthworms and crustaceans. Both tadpoles and frogs are eaten.

It breeds in December–May in east Java and January–August in west Java. Breeding season on the continent is not clear It nests in trees and bushes near marshes and ponds, usually over hanging the water: It nests solitarily, in small colonies and also in large colonies in association with other species including Cattle Egrets and Little Egrets. The nest is built of twigs, not reeds. It is placed at varying heights within the colony, not just low. The nests are in the leafy branches of trees.

Apart from an alleged, but undescribed special call, no observations have been made of the courtship behavior of this species.: Eggs are dark green blue. They are 37.7 x 28.7 mm, about the same size as those of are the Indian and Chinese Pond-Herons. Clutch is 3-5 in mainland colonies, 2-3 in Java and Bali (MacKinnon 1993). The incubation period is not known and very little is known about the nesting biology of the species, chick development, or nesting success.

Nothing is known about the population biology and demography of the species.

Conservation requires additional fundamental information on the biology of the species and surveys to identify important areas.

Despite its abundance, the biology of the species is little known. Even its food habits are barely documented. Basic studies are needed to develop an understanding of its distribution, important areas, foraging ecology, nesting biology, and demography. The breeding status of the species in the Philippines and peninsular Malaysia needs to be determined.

So much has been documented about the ecology of this bird. As a typical pond heron it is a lonely, cryptic species that feeds by Standing and by Walking slowly in shallow water or on the edge of the water. It feeds in the open, and is typically a bird of rice fields over much of its range. It is seen frequently and easily, and can be very numerous. It likely consumes a wider array of prey than is now known, and probably occupies a more diverse habitat. It is a successful species, benefitting from its association with agriculture.