The Least Bittern is the smallest heron, a pale buff bird with a dark crown and back and buff-colored wing patches.

Adult: The adult male has a green black cap. The irises are bright yellow, sometimes almost orange, and the lores are lime green. The bill is yellow with brown horn along the top ridge. The sides of the face and neck are buff to tawny chestnut, and the hind neck and shoulders are bright buff to chestnut. The chin is white, as are the throat, and underparts, with buff brown throat streaks. Conspicuous tufts of feathers on either side of the upper breast, characteristic of the small bitterns, are black brown with pale edges. The back, rump and tail are glossy green black. The flight feathers are black, whereas the secondary feathers are chestnut, and the upper wing coverts are buff forming a contrasting wing patch. White lines bordering the upper wing are conspicuous above the wing both at rest and in flight. The legs are green in front and yellow behind. The soles of the feet are yellow. The legs and feet are may be suffused with brown or black. In courtship, the Greeting Ceremony and at other times the base of the lower bill flushes red (Kent 1986c).

Variation: The female averages larger than the male. It has chestnut, rather than black, upper parts, a less prominent crown, darker neck stripes, and dark brown chest streaks, and paler wing patch.

The Least Bittern varies geographically and individually (Dickerman 1973b). Compared to exilis described above, erythromelas has the sides of its face and neck rufous; the female has less streaky under parts than typical exilis. Peruvianus is larger, with a long bill, and duller color. Bogotensis has richly colored under-parts; the front of its legs and feet are almost entirely black; the female lacks the rufous tinge to the blackish-brown back found in erythromelas. Pullus is notably dark above, its coverts scarcely contrasting with its flight feathers.

Some variation appears to have both geographic and individual components. A variant once known as “Cory’s Bittern” has the pale areas, especially on the neck, under sides and wing-coverts, replaced by dark chestnut. This form has been reported from Ontario, Florida, and Brazil (Teixeira and Alvarenga 1985).

Juvenile: Immature birds are similar to adult females but have a paler, browner crown and back and dusky streaks on the wing patch. The streaking on their throat and breast is browner than in the female, gives a striped effect

Chick: The young’s head, back and neck are covered with pale buff down, with the longest down on the head forming a crest. The under parts are white. Chicks vary overall from pale to deep buff. The skin of the head, neck and back is pink with abdominal area grey. The bill is pink and black toward the tip, and the irises are white. The legs are pink.

The Least Bittern is identified by its small size, buff and black color scheme with black back and light lines on the side of back, and buff wing patches in flight. It tends to fly rapidly with fast wing beats, but weakly and usually for short distances. When startled into flight, it appears clumsy and flies with its legs dangling and neck extended.

The Least Bittern is one of the small bitterns, Ixobrychus, that share similar plumage, white eggs, scutellate legs scales, and ten tail feathers. It is closely related to the Little and Yellow bitterns, with which it shares a slender bill, uniform dorsal coloration, and moderate plumage sexual dimorphism. The dark color morph was once considered a separate species (Pittaway and Burke 1996). Geographic variation is classified into five subspecies.

Bogotenisis occurs in the savanna east of the Bogotá, Colombia. Peruvianus occurs in west coast Peru (Libertad and Lima province).

Migration: In the north of its range, the Least Bittern migrates from areas where frost prevails in winter. Southward migration occurs in October. Western birds migrate through western Mexico to about Costa Rica. Eastern birds migrate along the Gulf of Mexico coast and the West Indies, reaching northern Colombia. Return migration is the end of February to early April, or later in the far north. Post breeding dispersal occurs as well. Dispersal records in the north include Newfoundland, northeast Manitoba, British Columbia, Iceland, Azores, Barbados. The southern subspecies appear to be sedentary.

Status: The Least Bittern is widespread in North America, but little is known of its population status because of the difficulty of censusing it. Calling male density ranges from 0.4 to 12 nests/ha (Gibbs et al. 1992a). Although decreasing in some areas and increasing in others, populations in the North America appear stable overall, but information is poor (Morales 2000, Baker et al. 2000). It is common on Cuba, Cayman Islands, Puerto Rico uncommon on the Bahamas, Hispaniola and Guadeloupe, rare on Dominica and Virgin Islands. It is uncommon in Costa Rica (Alvarado pers. comm.) and uncommon to rare in the rest of Central America. It is common in Trinidad and Colombia. As far as is known, populations are stable over most of South America and its known range is being extended by new observations there (Morales 2000). Bogotensis is still common in its restricted range but its wetlands are threatened (Scott and Carbonell 1986). The status of peruvianus is not clear, but it occurs in a small range and uses disturbed areas (Scott and Carbonell 1986). 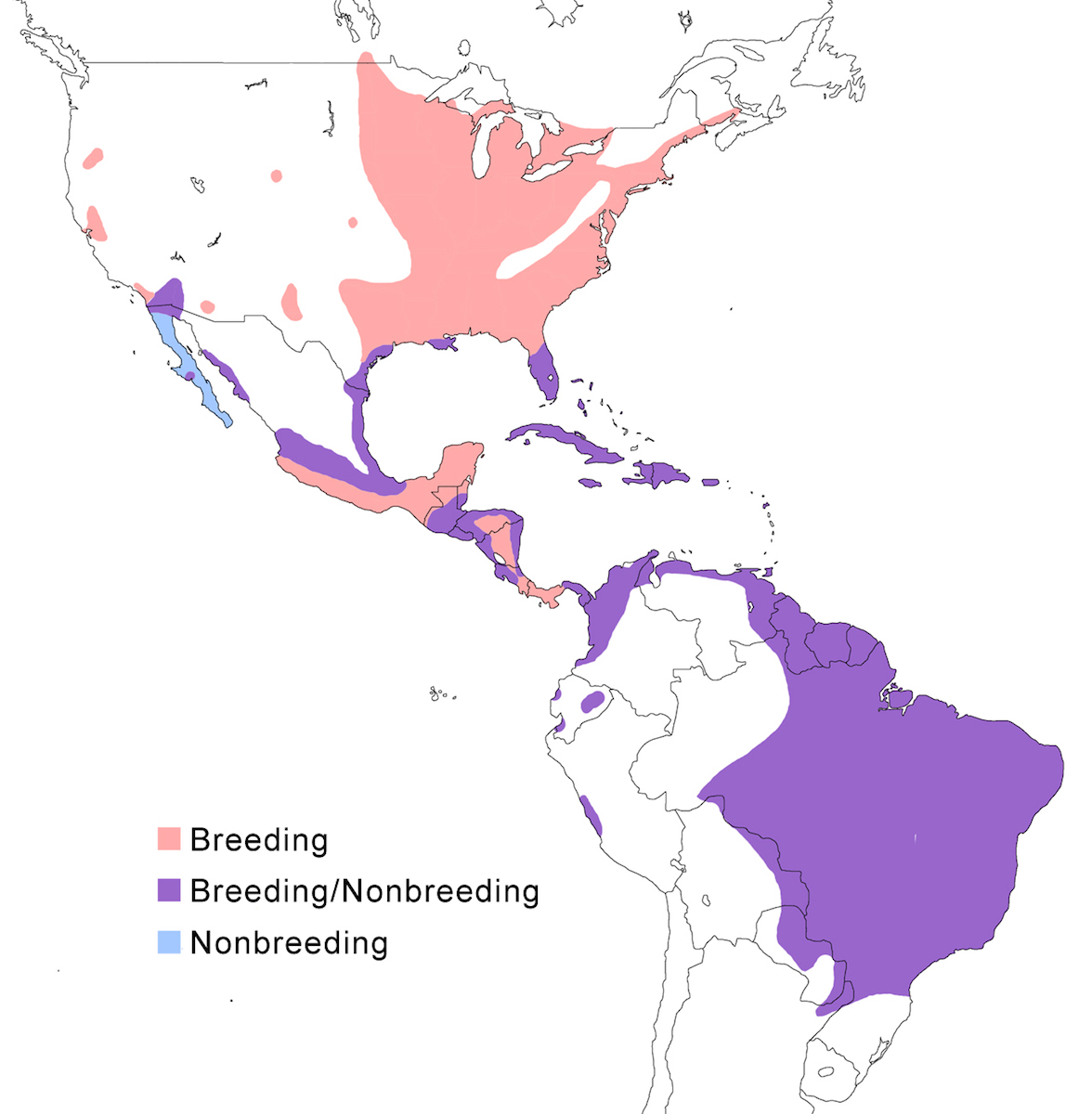 The habitats used by Least Bitterns differ considerably from place to place but usually include very dense vegetation in water, some woody growth, and open water patches. In addition to fresh water marshes, they use lake edge marshes (Rodgers and Schwikert 1999), salt marshes in temperate areas and mangroves in the tropics. It occurs from the coast to 3,100 m in South America.

Characteristically, the Least Bittern feeds by Walking Slowly, stalking through the reeds or along the edge of dense reed stands or on branches over the water. It walks in Crouched posture, with its neck extended and its bill nearly touching the water. From this position it launches a rapid strike. It also feeds by Standing in place, and will build feeding platforms to use while Standing. It uses Neck Swaying and catches insects by Gleaning and Standing Flycatching. Among active techniques is Wing Flicking. It tends to change foraging spots after a strike by Walking to a new spot.

In the north, The Least Bittern nests in the spring and summer, May–August. Nesting in the tropics is more varied and more information is needed. They nest in February–March in Colombia. Nest primarily is in thick herbaceous marshes, with woody vegetation, near open water. The most commonly used habitat is cattail marsh (Typha) (Frederick et al. 1990, Gibbs et al. 1992a). Other herbaceous plants used include Mariscus, Carex, Scirpus, Sagittaria, Phagmites, and mixtures of these. Woody plants include Cephalanthus and mangroves (Rhizophora).

It nests solitarily and in small groups. Nests in groups can be as close as close as 1 m a part resulting in densities of 3-4 nests per 100 square meters (Kushlan 1973b, Rodgers and Schwikert 1999).

The nest is a small platform of herbaceous stalks or sticks. Nests are 15-20 cm wide and 5-12 cm thick placed over the water usually in herbaceous vegetation. A canopy may be made by pulling reed stalks down over the nest. Nest are also placed bushes next to or over the water. The nests are less than 1 m above the water and near open channels or pools within the march (Gibbs et al. 1992a). Primarily the male constructs the nests, and nest construction continues into incubation (Weller 1961).

Male bitterns advertise with the “Coo” call, but little other is known about courtship. After pairing Non-contact and Contact Bill Clappering occur. Greeting Ceremony is used in nest relief. The bird on the nest gives a low “Gra” call. The arriving bird erects its crest and body feathers and both birds Bill Clapper. Territorial defence is well documented. The Bittern Posture seems to be used as a defensive display. They also use a more aggressive Forward display, with head withdrawn and wings spread.

The eggs are white and measure about 31 x 24 mm. Clutches in the northern part of the breeding range tend to be of 4-5 eggs. Mean clutch sizes were 3.8 in South Carolina and 4.08 in Florida (Post 1998, Rogers and Schwikert 1999). In the tropics clutches of 2 or 3 are more usual. The range is 2-7. Incubation begins with the first or second egg and takes 17-20 days. Both sexes incubate and rarely leave the nest unattended.

Hatching is asynchronous occurring over 3-4 days. The young are semialtricial and are fed by regurgitation, the male apparently doing about twice as much of the feeding as the female (Weller 1961). Chicks develop quickly, particularly their legs and feet. They can grasp by day 3, assume the Bittern Posture by day 4, and leave the nest temporarily by day 5. They begin to wander from the nest after six days and leave the nest completely in day 13-15. They return to be fed in the vicinity of the nest. They fledge in 3 1/2 weeks).

Hatching success is 70-84% and the success of a nest to fledge young was 20% to 73% (Gibbs et al. 1992a, Post 1998, Rogers and Schwikert 1999). In Florida, only 47% of the nests produced 2-week-old young (Rodgers and Schwikert 1999). Nesting success in mixed species colonies was greater than for bitterns nesting alone (Post and Seals 1993). Losses are due to flooding, wave action, abandonment, and predation, including mink (Mustela), wrens (Cistothorus), snakes, raccoons (Procyon), crows (Corvus), turtles, and raptors.

Conservation of this species requires protection and management of its marsh habitat. Water impoundments and wetland construction for various purposes increase the potential habitat for the species as it often nests in cattail marshes created by human activities (Post 1998, Gibbs et al. 1992a, Horstman et al. 1998). In North America, many wetlands are managed by the government for waterfowl and similar purposes, and these provide important opportunities to also provide habitat for bitterns (Gibbs et al. 1992a). Wetland management should take the needs of Least Bitterns into consideration when designing management actions. Standardized monitoring needs to be conducted to evaluate population trends. In Central and South America, information is needed on the breeding distribution and habitat needs of the species.

Nothing is known of the courtship and social systems of the species, and these topics need to be studied further. In North American, standardized techniques need to be developed and employed regionally to assess population sizes and trends. Studies are needed of habitat use and the distribution of bitterns during migration and non-breeding to identify major stopover and wintering sites for North American birds. Management techniques need to be developed to create optimal combinations of marsh and open habitat conducive to Least Bittern nesting. In South America, surveys need to be conducted to determine the breeding range of the species through the Amazon and Andes. The status of bitterns in west Peru, and their habitat requirements there, need to be addressed.

The Least Bittern is a widespread species that characteristically depends on thick emergent marshes. Its small size, thin body, and long toes and nails allow it to move through dense thicket with ease. It feeds quietly by Walking and Standing and often changes locations. Where food is abundant it makes feeding platforms to use within its feeding territories. By feeding from the vegetation it uses and seems to prefer deepwater situations. Its most common habitat is cattail marshes, which tend to increase in disturbed areas. Its diet seems to be mostly fish. This cryplic, inconspicuous small heron can be locally abundant, and much remains to be learned about its sociality.