The Malagasy Heron is a large grey heron occurring on the island of Madagascar.

Adult: It is a dull grey bird having a distinctive black coloration on its crown, side of head and chin, the only heron with a contrasting black chin. Its bill is yellow with a black base. Irises are yellow and legs brown. Soft part colors likely change seasonally, but details are needed.

Variation: There is no information on sexual or other variation.

Chick: The chick is unrecorded.

Voice: The voice is not reported, although it is probably has similarities to that of the Grey Heron.

The Malagasy Heron is identified by black head and chin and yellow bill. It is distinguished from the Grey Heron by its being larger, darker, with less contrast, and having a heavier bill. Interestingly, local people apparently do not distinguish between the two species.

This species is related to the Grey Heron and the other large Ardea.

This heron occurs on the island of Madagascar and the nearby Comoro islands (Draulans 1986).

Breeding range: On Madagascar it is distributed along the west of the island. It seems to be absent from the east, at least although it was originally collected from there.

Migration: There is no evidence of migration, but it may be prone to long-distance wandering, given the Comoro records.

Status: The Malagasy Heron is very rare and is considered to be decreasing (Turner 2000). It occurs in four protected areas in west Madagascar and in January 1983, 463 individuals were censused in the Antsalova region (Turner 2000). Confirmation of breeding status is needed both there and in the Comoro Islands. It is likely the global population is fewer that 5,000 birds (Rose and Scott 1997). 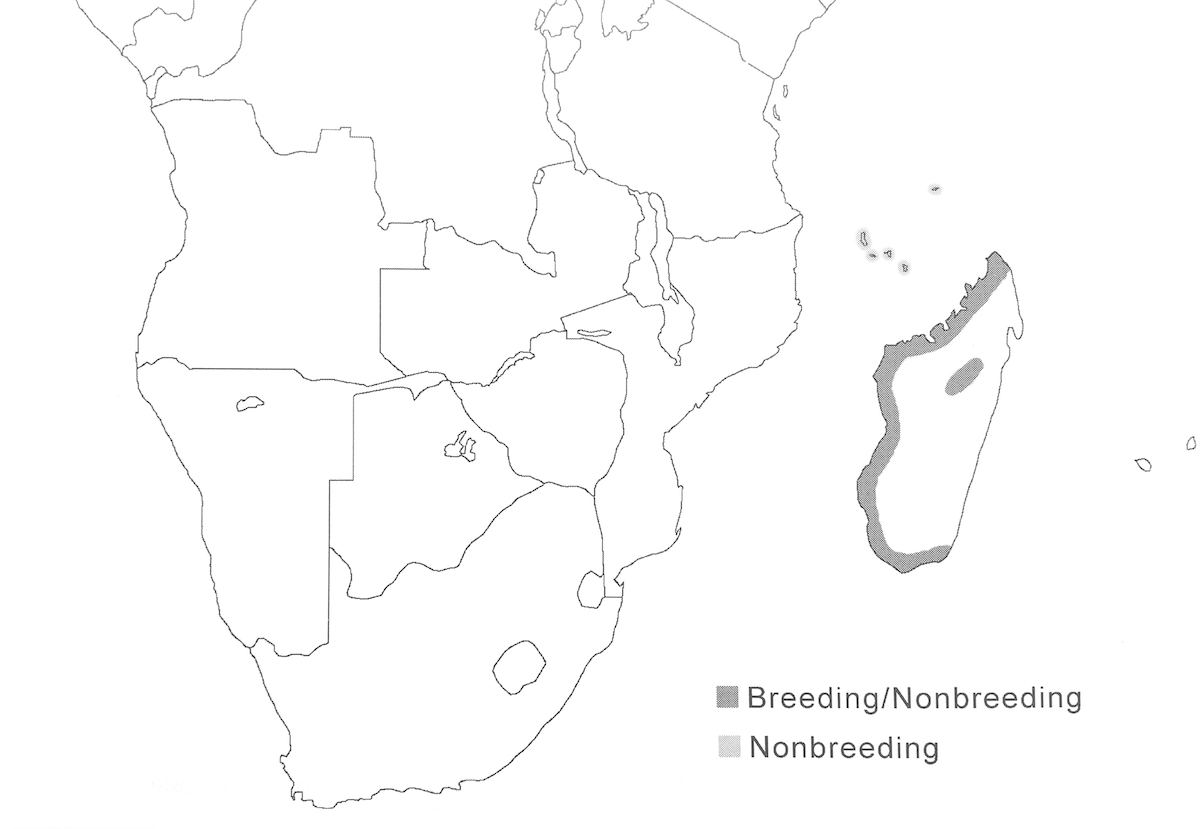 The Malagasy Heron appears to preferentially be a bird of coastal areas, particularly tidal mud flats and shallow water mangrove bays. However, it has been reported as using various aquatic situations including lakes, tidal flats, reefs, and rice fields. At Lake Kinkony, a freshwater locality not far from the coast southwest of Majunga, the species used masses of floating vegetation (Rand 1936). In the Comoro Islands it fed in coastal tidal flats.

The Malagasy Heron feeds by Standing, remaining motionless for long periods with its neck stretched out or in typical heron resting position (Draulans 1986). It is an extremely patient, passive forager, staying in one place, often in deep water, and then moves by flying or Walking Slowly to another site. On the Comoros herons fed on the outgoing and incoming tides, and rested at high tide. It defends its feeding territory against intruders.

The heron appears to specialize on medium to large fish. Its large dagger-like bill seems to be adapted to such prey. It has been reported to take eels, 48 cm long (Benson 1960), but probably observations on the Comoros are more typical, where they took fish about 1.5 times the size of their bill (Draulans 1986).

The breeding season is not clear. Nests were found active in mid July, but females in breeding condition were collected in early December (Rand 1936). The herons have been recorded as nesting in a small patch of forest and also on the ground. As far as is known, the Malagasy Heron nests in very small groups in mixed species colonies. But more needs to be known. Nothing is known of the nest or courtship behavior of this species. Similarly, nearly nothing is known of the nesting biology of this species. Only three nesting sites have been reported. One nest had three blue eggs.

Nothing is known of the population biology.

Except for the Comoro Island observations, this species is endemic to Madagascar. It was probably never abundant, but is extremely rare now. It is globally vulnerable (Hafner et al. 2000, IUCN 2003). It has a patchy distribution along the west coast of Madagascar, fortunately including four protected areas (Turner 2000, Hafner et al. 2000). Until recently its habitat was inaccessible but is now threatened by the conversion of wetlands to rice, other development pressure, as well as hunting and nest predation by local people. The rarity of this species suggests that it is one of the herons of the world most in need of protection and conservation. Surveys for nesting and feeding sites, including along the east coast, protection of known sites, and legal and effective protection of individual birds and nests are needed (Turner 2000). These need to be part of a conservation action plan for the species, in concert with other conservation action ongoing on the island.

So little is known about the basic biology and conservation status that detailed studies are required. Surveys of its distribution and abundance in Madagascar are needed, as is an understanding of its breeding status on Comoro Islands. Nesting sites and feeding areas need to be identified and protected Further study of its highly patient foraging behaviour, diet, and habitat needs is needed.

Little is known about the species ecology, and studies are critically needed to understand its biology and conservation needs. This seems to be a heron of coastal tidal situations where it infrequently catches large fish. It is found solitarily or in small numbers. As a vulnerable species, conservation action is required immediately.