The Malagasy Pond-Heron is a buff brown streaked small heron, and when breeding is snow white with a blue bill and red legs.

Adult: In nonbreeding plumage the crown and back of head are buff, broadly streaked black. The bill is green grey with a black tip. The irises are yellow and the lores are green. The sides of the head and throat are yellow buff streaked narrowly with blackish-brown. The upper and lower back is brown with white or buff streaks. The rump and tail are white. Upper wings are brown with white or buff streaks. The flight feathers, in contrast, are white and are conspicuous in flight. Underparts are heavily streaked black and buff brown, contrasting with the lower belly and under tail coverts. The legs are green yellow or green grey.

In the breeding season the Malagasy Pond-Heron becomes entirely snow white. The crown has a dense crest. Dense plumes also occur on the back of the neck, back, foreneck and breast. These give the bird a characteristic fluffy appearance. The bill is a deep azure blue with a black tip. The irises are yellow and the lores are green with some red on the orbital skin. The legs are rose pink, with green toes. The intermediate plumage is a mixture of new brown feathers, starting on the back.

Variation: The sexes are alike. There is no geographic variation over its small range.

Juvenile: Juveniles are similar to non-breeding adults, but have sooty brown on the outer flight feathers and tail. The iris is pale green. The bill is dull orange, with a dark tip and culmen.

Chick: The chick has thick buff yellow down.

Voice: The Squawk Call is more raucous and less shrill than the equivalent call of the Squacco Heron. The “Burr” call is the threat call.

In breeding plumage, the Malagasy Pond-Heron is unmistakable, identified as a small all white heron with bushy plumes, blue bill and green lores. In nonbreeding, it is identified by its brown plumage and stocky build.

Nonbreeding and juvenile birds of the Malagasy Pond-Heron and Squacco Heron are difficult to separate in the field. It is distinguished by being stockier with darker browner (not tawny) plumage, darker heavier streaking, heavier bill, and in flight having a squarer wing tip. There are also some behavioral differences. Unlike the Squacco Heron, it is often found near trees and will fly into trees when disturbed.

The Malagasy Pond-Heron is an Ardeola pond heron, confined to the Malagasy region. It is closely related to the other typical pond herons. Pond herons are sometimes considered to be subspecies of Ardeola ralloides or members of a superspecies. But idae is generally considered to be a different species, because its range overlaps ralloides without interbreeding. The relationships among all the pond herons clearly need to be restudied using molecular techniques.

The Malagasy Pond-Heron occurs in Madagascar and Aldabra Islands and in nonbreeding season in central and east Africa.

Breeding range: It breeds only in Madagascar and Aldabra. In Madagascar, it breeds on the west of the islands, especially around Antananarivo. In Aldabra, it has been reported breeding on Ile aux Aigrettes and Ile aux Cedres since 1967.

Migration: This pond heron migrates between Madagascar and Africa. It migrates eastward during May, returning October. Some birds remain in Madagascar during nonbreeding and some young individuals may remain in Africa during their first year.

Not unexpectedly for a migratory species, unexpected dispersal records occur, such as the Seychelles (Feare 1975) and southern Somalia (May and August 1979). Dispersal no doubt allowed colonization of Aldabra.

Status: This species has undergone a decades-long decline in breeding numbers. The species once nested throughout the island and was common during the 1940’s. By the 1970’s populations had been severely reduced. It remains fairly widespread, but apart from around Antananarivo, numbers are declining on the high central plateau (Turner pers. comm.). Colony size has declined from over 700 to dozens, and it now breeds only in small numbers in a few colony sites (Langrand 1990, Lyles 2000).

In Aldabra, it is generally uncommon but widespread outside of nesting season. Only two colony sites have been reported and the population was estimated to be less than 100 individuals in 1967-68 (Benson and Penny 1971). Recent information is lacking. 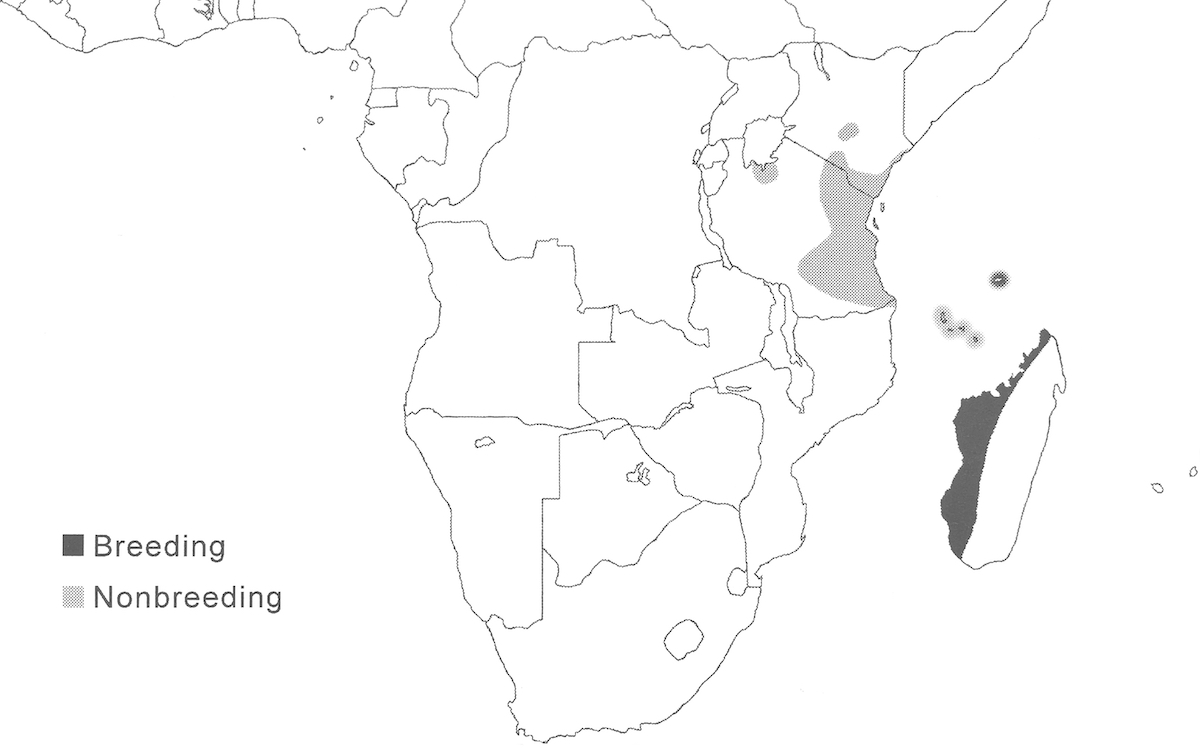 In Madagascar, the bird’s major habitat includes small grassy marshes, small lakes, ponds, streams, ditches and rice fields. Its preferred habitats are usually lined or near to trees and bushes. It appears to be more dependent on trees than other pond herons. In Aldabra, it uses inland pools, lagoon shores, and also areas away from water. In East Africa, it occurs in fresh water marshes and along the banks of small streams. It ranges from sea level to 1,800 m.

The Malagasy Pond-Heron is a solitary feeder. It Stands and Walks slowly along the banks and edges of muddy lakes, ponds, shorelines, and even reefs or on floating plants. When disturbed it will often fly into nearby trees or bushes. In Aldabra, adults feed in mixed groups of egrets. Its diet includes fish, frogs, small reptiles (skinks, geckos) and insects (grasshoppers, beetles).

In Madagascar, the breeding season coincides with the start of the rainy season, form late October to December, but will continue through March if two clutches are laid. On Aldabra, eggs are laid in November–December.

It nests in trees and bushes in and near marshes, lakes or ponds. In Aldabra it uses mangroves (Rhizophora) and small bushes. The species is a colonial nester historically joining the Squacco Heron in colonies exceeding 1,000 pairs. In a typical mixed-species colony, it places its nests in a higher and more secure position than does the Squacco Heron.

The nest is a bulky structure made of twigs. It is placed fairly high in trees or bushes. In the mangroves in Aldabra, nests were placed 1.5-2.5 m above dry ground under the canopy of small bushes. Courtship behavior has not been described. Its threat display involves erecting its plumes, flapping its wings, and jabbing its bill forward.

The eggs are pale green white, as in the Squacco Heron. They average 40 x 29.9 mm in Madagascar, and range from 40-42 x 32-33 in Aldabra. The usual clutch is 3-4 eggs, with a range of 2-4. Eggs are laid at intervals of up to three days. Although usually single brooded, a second clutch in February–March has been recorded in Madagascar (Milon et al. 1973). Incubation begins with the last egg and lasts 20 days. Both parents incubate, the male from mid morning to mid afternoon.

Chicks hatch asynchronously. They are fed by regurgitation and development is rapid. They can begin to clamber from the nest at about 15 days. At less than four weeks they leave the nest and are independent. Nothing is known about the nesting success of this species.

This species is one of great conservation concern. The decrease of its population in Madagascar has been substantial to the point that conservation action is required. It is considered to be Vulnerable by IUCN (IUCN 2003) and near Threatened by HSG (Hafner et al. 2000). Habitat loss through clearing, drainage, and conversion to rice fields has adversely affected this species. This species is an excellent candidate for establishing a captive breeding population. All herons on Madagascar appear to be suffering from population distresses owing to habitat loss and hunting. This species has not adjusted to rice growing as well as has the Squacco Heron. Conservation action involves continued surveys of the nesting areas in Madagascar and the identification of important wintering areas, which then need to be the focus of preservation and conservation action.

The Malagasy Pond-Heron is typically a pond heron in depending on marshes, small lakes and ponds, streams and ditches. Having trees and bushes nearby appears to be important for escape. Its distinctive seasonal plumage change and migration pattern between Africa and Madagascar are unique to the species. The African part of its annual cycle is particularly mysterious.