The New Guinea Tiger-Heron is a medium, brown and buff striped heron with a black crown.

Adult: The crown is black. The bill is relatively long, at 90 mm, the longest of all the tiger herons. The upper bill is black; the lower bill, ashy grey. The chin is white buff. The irises are yellow and the lores and orbital skin are sulfur yellow. The sides of the head and neck are barred in brown and light buff. The back and the upper wing are dark brown with fine buff lines. The rump and lower back are white with dusky tipped feathers. The under parts are buff to white with the feathers of the upper breast tend to fall over the belly like a bib or pinafore (Iredale 1956). The legs are described as lemon yellow, with the back of the tarsus washed with dusky brown.

Variation: The females are slightly smaller than males. It is reported that the bill of the female has a pearl green tinge below, the lores and orbital skin have a greener tinge, and the legs are more uniform greenish-yellow. More information on this and other attributed sexual differences are needed.

Juvenile: The immature has not been described.

Chick: The single chick described was covered in yellow white down.

Voice: The usual call of the New Guinea Tiger-Heron is said to be a low grunting. The species has also been credited with a bittern-like boom, but more information is needed.

Weights and measurements: Length: About 70 cm.

The tiger herons are a distinctive lineage of the Ardeidae, adapted to a forest existence. The five species constitute a sister group to all the other herons and bitterns and to the Boat Billed Heron (Sheldon et al. 1995). The New Guinea Tiger-Heron is considered to be more closely related to the African Tigriornis than to the American tiger herons (Payne and Risley 1976). The two Old World tiger herons have been regarded as belonging to the same genus. Additional material is needed.

The New Guinea Tiger-Heron is a species of the East Indies.

Breeding range: This species occurs in New Guinea (Indonesia, Papua-New Guinea) and on a few of the larger islands off its west coast (Aru, Salawati).

Migration: There is no indication of migration in the species.

Status: No information is available on population sizes, either present or past. It is rarely seen or reported (Beehler et al. 1986). There have been only 30 confirmed sightings in 15 years and only a single nest has ever been reported (Hafner et al. 2000). 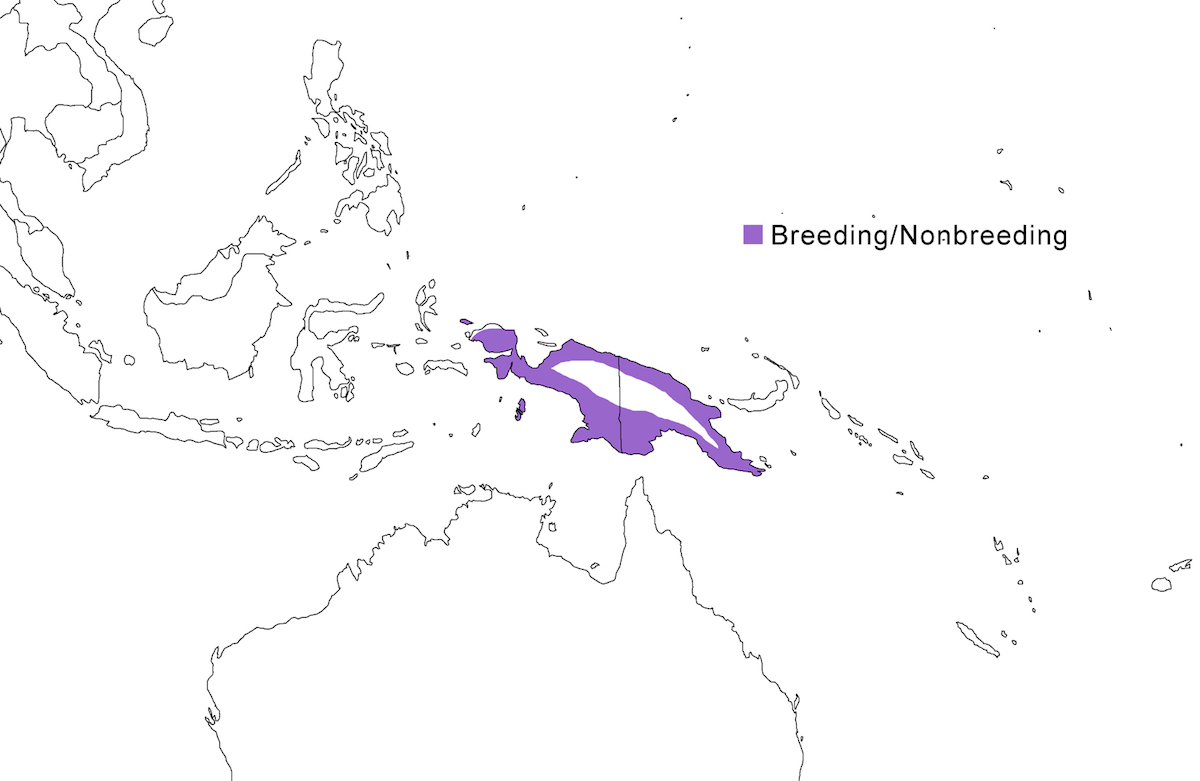 The New Guinea Tiger-Heron occurs in rain forest streams. It is primarily a lowland bird but has been recorded up to 1,450 m in the Central Highlands (Beehler et al. 1986).

The New Guinea Tiger-Heron feeds solitarily along forest waterways. There are no observations reported of its feeding behavior, other than its being seen feeding in this habitat It is recorded to eat crayfish, crabs, water beetles and other insects, small fish, lizard, and snake.

Almost nothing is known of breeding behavior of this heron. The courtship has never been observed. Nothing is known of the eggs or the clutch size. The one observation is of a single chick, suggesting a hypothesis that it may have only a single egg, which would be unusual for herons, and all the more intriguing for that. Similarly, nothing is known about the basic reproductive biology of this species.

The population biology of the species is unknown.

It is likely that the species has declined in New Guinea (Rose and Scott 1997). It is considered to be near Threatened (Hafner et al. 2000, IUCN 2003). The lack of systematic, long-term knowledge is a huge impediment to being able to specify conservation action. With only about 30 sightings in 15 years, the species already likely is more than ‘near' threatened. Conservation action on behalf of the species should focus on preserving forest-edge habitat in New Guinea.

As a tiger heron it feeds along the edge of forest streams, generally in the lowlands. This is a species that has been observed and reported very infrequently. Much needs to be understood about its basic biology and conservation needs.