The Pied Heron is a small black and white heron, with black head and head plumes, white neck and black body.

Adult: The Pied Heron has a uniquely black face and crown that forms a crest including elongated black plumes. The bill is straw yellow, dark slate blue at base. Lower mandible may be grey yellow. Irises are yellow; the lores dark slate blue. The throat, lower face and neck are white. The back, wings and belly are slate black to dark blue having deep slat blue wash. Lanceolate back plumes are slate blue and long white lanceolate plumes hanging down over the otherwise dark body. The legs and feet are olive yellow to orange. During courtship the bill and legs turn very bright yellow and the iris orange red. The crest plumes become more prominent, and the body plumage takes on a bright slate blue sheen.

Variation: The sexes are alike, and there is no geographic variation.

Juvenile: Juveniles have a white head and neck, lacking a crest. It has a light to white breast, grey brown to grey white belly, grey brown back and wings, which in flight show a white carpal patch, apparently absent in the adults. Head color can vary from white to pale grey, brown grey, or streaked rufous. Juveniles retain their distinctive coloration for over a year and are so distinctive that they were once classified as a separate species.

Chick: The downy chick is yellow brown to white with dusky sides. Newly fledged young retain the brown head. The underparts are pale slaty, often streaked white, or sometimes entirely white. The black wings are tinged brown, the tips of the secondary feathers are spotted with white.

Voice: A croaking “Ohrk" call is the flight and taking off call. A soft cooing is given at the nest. Little is known about vocalizations.

This species, along with the White Faced Heron, has sometimes placed in Ardea, but it is better allocated to Egretta (Payne and Risley 1976).

The Pied Heron occurs in northern Australia and the East Indies.

Breeding range: It breeds in south Sulawesi (White and Bruce 1986) and patchily in Australia (Western Australia, Northern Territory, Queensland). Its breeding range has recently expanded in Australia. In 2000-2001 it bred for the first time in the Macquarie Marshes in the Murray-Darling River system, which may herald extension of its breeding range further into inland New South Wales (M. Maddock and R. Kingston pers. comm.). It is possible that it breeds in more areas than are now known.

Migration: Within Australia, Pied Herons undertake regional movements in relation to rainfall and resulting food availability, shifting from coastal breeding grounds to inland swamps and then to tidal mudflats, in June to November. There is a regular migration from north Australia to south New Guinea via the Torres Straits. Dispersal records occur in South Australia and Victoria (Johnson and Eddie 2000).

Status: It can be seasonally common within its limited breeding range and in south New Guinea. It is more irregular elsewhere. The nesting population in the northern Territory is estimated to be 15,000 birds in 15 nesting sites (Maddock 2000). The total population is much larger since flocks of 20-30,000 birds have been seen in New Guinea and 22,000 counted along the Middle Fly region (Maddock 2000). 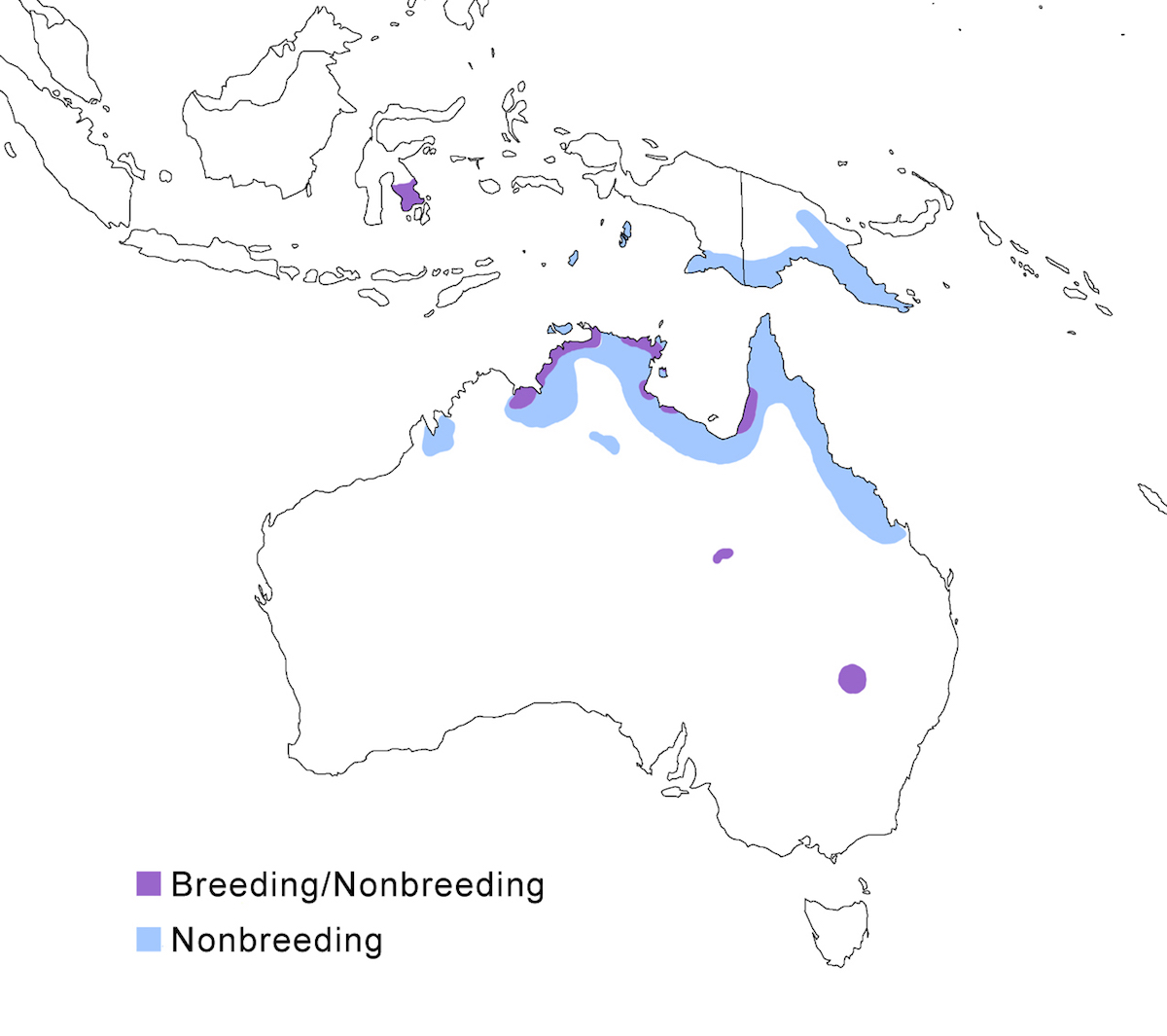 The Pied Heron uses a wide variety of coastal and near coast habitats including coastal swamps, mangroves, mud banks, sand banks, flooded and dry grasslands, tidal river edges, shallow streams, billabongs, and lakes. It at times feeds from floating vegetation or from banks overlooking deep water. It also uses artificial feeding sites such as rice fields, sewage ponds, stock ponds, pig and poultry yards and garbage dumps and is attracted to burnt grasslands. It generally occurs within 100 km of the coast, from sea level up to 2,500 m in Papua New Guinea.

The Pied Heron is an active feeder, usually in very shallow water or on land at the water edge (Gochfeld 1986, Recher et al. 1983, Morton et al. 1989). It Stands and intermittently Walks Slowly in shallow water and channels. It uses Crouched posture to wait for prey. In Walking or Standing, it frequently assumes an Upright posture, often Peering Over. It Stabs at prey with bill angled at about 45 degrees. Most prey are taken by Gleaning from vegetation by rapid Pecking. It chases prey by Walking Quickly, Running, or Walking Slowly. As the opportunity allows, it also feeds by Hovering, Plunging, Dipping, Foot Stirring, Wing Flicking, Foot Stirring, and Probing into mud and grass.

It is usually feeds gregariously or alone. When feeding solitarily it will defend feeding territories of up to 50 m2 with Forward displays, Crest Raising, Supplanting Flight, and Running (Coates 1986). Fights can occur, with both birds Stabbing as they fly up together. Aggregatively, its feeding in mixed aggregations of over 1,000 birds has been reported. When feeding in groups, it is dominated by larger species, such as Little Egrets but also follows other birds to pirate the prey they capture. Immature birds often feed in small loose flocks of a few to 30 birds. On grasslands, it feeds following cattle.

When not feeding during the day, especially during high tide, birds roost in mangroves or on exposed banks near the feeding sites to preen or sun bathe, using Droop Wing posture. At night they roost singly or communally in small to large groups. In Papua New Guinea, thousands roost together in bamboo.

Insects predominate in the diet, including grasshoppers, water bugs, diving beetles, and cockroaches. Small fish and frogs also are commonly taken. They also eat dragonfly larvae, small mollusks, and crustaceans. They also scavenge, for example, by Hovering to take floating debris from the surface of a sewage pond.

Nesting takes place in the summer rainy season, usually February–April, although at times as early as January and as late as June, depending on the season. They nest in coastal mangrove swamps, coastal river forests and tidal creeks. They typically nest in mangrove trees.

The Pied Heron is colonial nester, breeding in large mixed colonies of up to 20,000 nests, including Little Egrets, Eastern Great White Egrets, Intermediate Egrets, ibises, darters and cormorants. Pied Herons tend to clump together within the colonies; their nests can as close as 4 m of each other. The nest is a small, concave platform or bowl of sticks and twigs lined with finer twigs inside (Ely 1976). They are placed 2-5 m above the water tucked well into the canopy.

Almost nothing is recorded of the courtship of the Pied Heron. The eggs are a deep blue-green and measure 41 x 31 mm. The clutch is 2-4. Incubation, fledging and juvenile periods are not known, but most young can be expected to be flying by May in Australia.

The population biology and demography of this species are not known.

The species is common and locally abundant along the lowlands of tropical north Australia and south New Guinea. It has been able to take advantage of irrigation and the creation of reservoirs, sewage lagoons, ponds, and stock tanks. Its flood plain habitat is threatened by introduced water buffalo which break levees leading to salt water intrusion. Continued buffalo management and land restoration are required in this area.

It is likely that additional breeding sites occur within the core range in north Australia. Surveys should be undertaken to better document breeding sites. Similar surveys in Papua New Guinea should be conducted to determine non-breeding locations and at other seasons to determine if nesting occurs there. This is a little known species. Basic research is needed on the breeding biology, courtship, nesting success, survival, and other aspects of demography.

The Pied Heron is a species of coastal and near-coastal environments. It is a small, adaptable heron using a variety of feeding situations and a diversity of feeding techniques to catch small prey, mostly insects Gleaned from aquatic plants and also fish caught in very shallow water. It defends these food resources from competitors. In addition to wetlands and pastures, it can use tidal sites as well as human-provided feeding locations. As a result of its large feeding and habitat repertoire its overall diet is robust, taking whatever it encounters from molluscs to floating dead material. It is unusual among typical herons having young that look so different from the adults. It is possible that young also use different social and feeding strategies. When non-breeding, birds move distances to access appropriate feeding sites or avoid drought. Although a species of restricted range, it appears to be a successful one.