The Rufescent Tiger-Heron is a medium cryptic brown heron with a rufous neck and streaked throat.

Adult: The Rufescent Tiger-Heron’s head, sides of the head, and long, thick neck are rich chestnut brown to rufous cinnamon. The bill is relatively long, up to 10 cm, appearing slightly up tilted, and varies in color according to age and season, in ways that are not well understood. The upper bill is dark (olive black, yellow brown, or black) and the lower bill is light (yellow, green or pale olive buff). Skin at the base of the bill is yellow. The lores appear to have three stripes running from the bill, yellow above and below, grey in the center. The skin around the eye is also yellow. The feathered chin is white. The irises are yellow, but sometimes pale brown. The neck is relatively long and can be snake-like as its held out while the bird is feeding. The foreneck has a wide, rufous vertical stripe brown in its center, bordered by white stripes on either side, which are particularly effective when the bird raises its head or assumes a Bittern posture.

The back and tail are green black and wings dark grey, all having multiple delicate brown lines, speckles, and flecks that extend variably onto the head (Hancock 1999). Not visible, but a character distinguishing this species from the other tiger herons, is a lack of interscapular powder-down patches. The flanks are slate, horizontally striped with thin white lines, also variable among individuals. The abdomen is grey with an ochre tinge. The under wing is slate with sharp white banding. The legs, with relatively long tarsi, and are dark olive or black in front, and green behind. In courtship the soft parts brighten and the irises turn bright red.

Variation: The sexes are alike, although there is an indication of sexual difference in plumage details (Hancock 1999). Geographic variation is recognized by two subspecies. Lineatum, as described above, is the smaller of the two and has less extensive throat feathering. Marmoratum is somewhat larger. Its throat feathering extends a short way over the base of the lower mandible, as in the Fasciated Tiger-Heron. Birds from Argentina have a dark crown, sometimes with bold streaking and were formerly treated as a separate species, Tigrisoma bolivianium. However, dark on the forehead, sometimes with additional black streaks occur elsewhere within the species so the black cap appears to be within the range of individual variation of the species, and these birds are considered to be marmoratum (Eisenmann 1965).

Juvenile: Juveniles are typically bright cinnamon buff, broadly barred and spotted in brown and black. Immature birds are variable, undergoing gradual plumage changes through the fifth year (Rossi 1958). The head and neck is thinly barred in brown. The irises are yellow, and the pale horn bill is shorter than in the adult, starting as short as 8 cm. The lores and base of bill is white. The neck, back, sides and upper wing are boldly barred with brown. Under sides are pale to white. The tail is narrowly banded with white. The thighs are lightly banded in white and light brown. Legs are yellow. The first juvenile plumage of pale buff barred brown and black is gradually replaced at 8-12 months by bolder black and tawny barring, black spots on the breast, and an indication of chestnut on the nape. From about 16 months the chestnut becomes more pronounced, and over the next two years the black barring on the lower neck and crown gradually disappears.

Chick: The young is covered with white down with a short white crest. It has a bare yellow throat, yellow irises and bill, and dull black legs and feet.

Voice: A “Wok” call, rendered “wok, wok” is the alarm. The “Quoh” call, rendered “quoh, h, h”, is the night time contact call. In courtship, a groaning or nasal humming call has been reported, as has the Bill Snap.

The adult Rufescent Tiger-Heron is identified by it rich chestnut to rufous brown neck and head, dark and white lined throat, dark flanks with narrow white bands, white banded under wings, and relatively long neck and lower legs. The adult is distinguished from the Bare Faced Tiger-Heron by its rufous chestnut (not black) head, chestnut (not vermiculated brown) neck. It is distinguished from the Fasciated Tiger-Heron by being slightly larger with longer lower legs, by its slender, straight bill, its chestnut (not barred) head and neck, white banded flanks (not uniformly grey), grey abdomen with ochre tinge (not tawny), and having its slaty under wing coverts much more sharply banded in white (Eisenmann 1965). In the early broad-barred plumage stages, juveniles are very difficult to tell from juvenile Fasciated Tiger-Herons; but it is distinguished by its straight, slender (not arched and thicker) bill, slender appearance, and in hand by distribution of powder down patches. It is distinguished from the Botaurus bitterns by its slightly larger size, cinnamon buff with brown and black barring on upper sides, pale to white under sides, and barred black and white sides.

The tiger herons are a distinctive lineage of the Ardeidae, adapted to a forest existence. The five species appear to constitute a basal, or primitive, group as appear to be the Agami Heron and the Boat Billed Heron (Sheldon et al. 1995, McCracken pers. comm.). Variation is high, with individual, developmental, and geographical components, so subspecific differentiation may deserve reanalysis.

The Rufescent Tiger-Heron is a bird of Central and South America.

Migration: As far as is known, the species is sedentary.

Status: Very little information is available on status throughout its range, and it is not often reported nor seen frequently on surveys. For example only 85 birds were reported in the winter Neotropical Waterbird Survey in southern South America (Blanco and Canevari 1992). However, it is widespread, probably with good overall numbers, and locally numerous is some areas, such as in Nicaragua, Costa Rica, and the llanos of Venezuela, and Argentina (Hancock 1999). It is likely slowly increasing in Panama (Ridgely and Gwynne 1989, Dyrcz 1999). 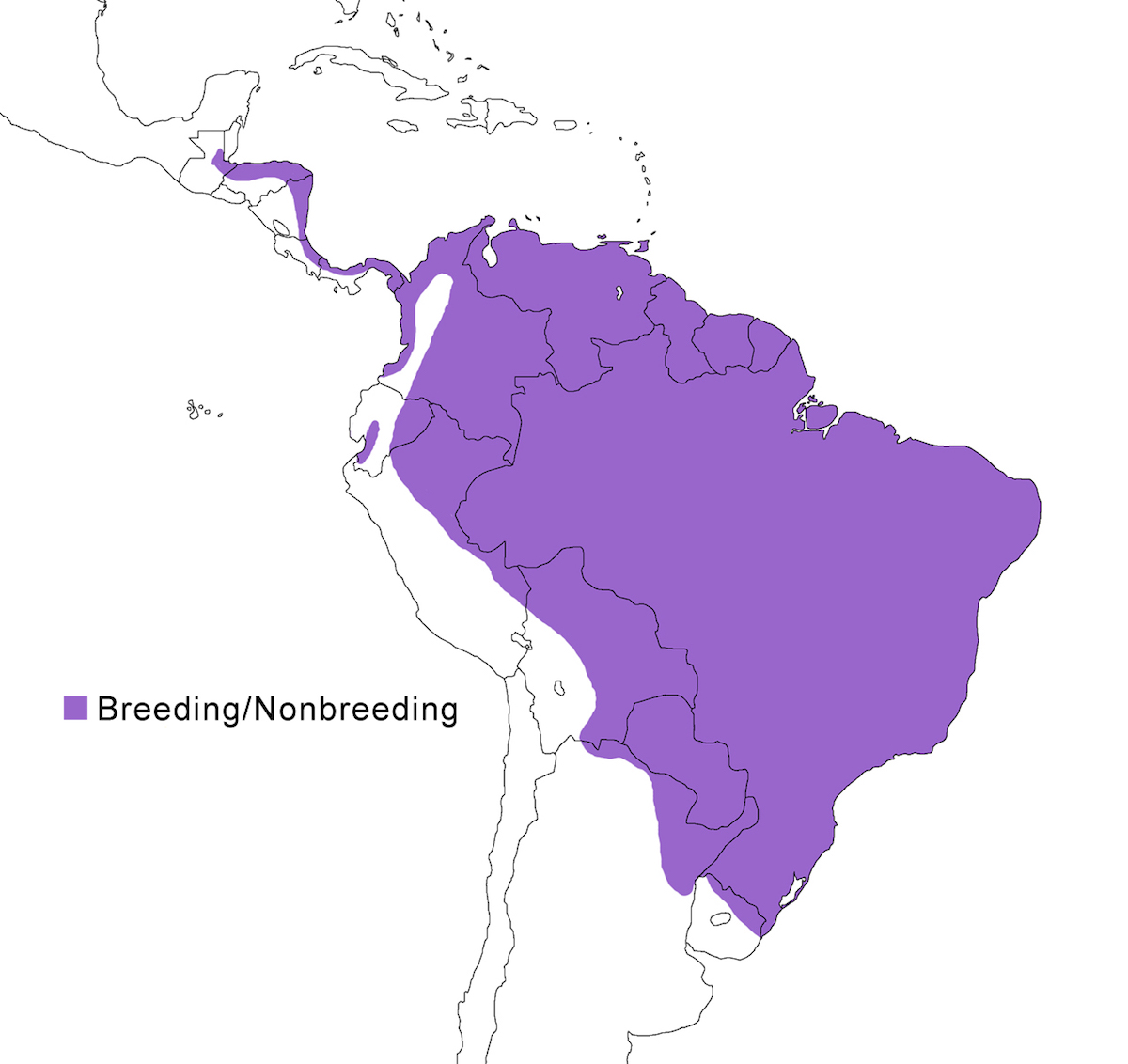 The Rufescent Tiger-Heron is a bird of wooded tropical swamps. It occurs especially along slow moving rivers in swamp forests, gallery forest, and mangrove swamps and also in other extensive forested wetlands. It is a bird typical of the great wetlands of South America, the Amazon, the Paraguayan and Argentinean Chaco, and the Brazilian Mato Grosso and is also found in hilly swampy forests such as the foothills of the Andes.

This species feeds primarily by Standing, typically along the edge of a stream or on floating plants. It freezes in its Standing position for long periods, with its neck withdrawn or, often, with its head and neck thrust forward on its elongated snake like neck. It has been reported to Walk Slowly on floating vegetation and also to use bread as bait to catch fish (Teixeira 1991). It feeds by night but also during the day, alone or in pairs. It vigorously defends its feeding territory, including from other herons such as Whistling Herons (Hancock 1999). It on occasion feeds in small groups. It appears to readily habituate to human presence and activities (Hancock 1999).

The breeding season is not well documented. On the basis of a very few observations, it is April in Panama, May–June in Surinam, and January–February in Argentina. Much more information is needed.

The courtship has not been described in detail. In captivity, a mutual display included elements of the Snap and Stretch. The pair bowed with entwined necks, Bill Snapping. Then one stretched its neck from side to side, while the other adopted a Bittern Posture (Rossi 1958). Courtship display of captives was accompanied by a ‘nasal humming’. Eggs are blue white to dirty white blotched in pale violet, dull red and brown. In Surinam, they averaged 56.8 x 43.2mm (Haverschmidt 1968). Clutches are of two eggs.

In captivity only the female incubated, taking 31-34 days (Rossi 1958). In one nest observed in the wild, change over did not occur during the day. In one nest, one of two eggs hatched (Hancock 1999). In captivity both adults of marmoratum fed the young by regurgitation of fish, at first well digested (Rossi 1958). The chick is fed only at night, apparently only once per night. Adults shade young form the sun, both adults and young using gular fluttering to stay cool (Dyrcz 1999). Nothing is documented on chick development and nothing is known about breeding success.

Nothing is known of the population biology of the species.

The species is very widespread, large overall, and probably stable (Morales 2000). However, as a species of forested wetlands and streams, it is not often reported, although not particularly shy (Hancock 1999). It can be expected to be affected by deforestation, reforestation, damming of lowland forests, its principal habitat, and human disturbance of nesting.

This is a species that is little known despite its wide range. Given the range of variation in the species and the difficulty of distinguishing juvenile Rufous from Fasciated Tiger-Herons, individual and geographic variation deserves closer scrutiny. The two (or three) identified subspecies appear to overlap geographically (Morales 2000). Individual, developmental, and geographical components of plumage, size, and habitat variation need to be reexamined. Movements, or lack of them, also need to be described, as this might confound observable patterns of variation. Tiger heron courtship behaviour deserves careful comparative study, given their evolutionary distance from the other herons and the distinctive nuances of behaviour so far reported. It may be that courtship differs substantially from the typical herons. The small clutch size and prolonged juvenile period suggests an interesting, long-lived demography. Study of its demography and ecology could provide considerable insight into the species and its less common relatives. This is a heron deserving much additional study.

The Rufescent Tiger-Heron is a forest heron that uses the edges of tree-lined streams and other water courses. It hunts by standing and waiting for prey, presumably fish. It is likely to feed nocturnally, but its daily schedule is not at all clear. Most intriguing is the small clutch size and extremely delayed maturation. These suggest that it is a long-lived species with low annual reproductive potential and likely is sedentary. The ecological correlates of this way of life could be intriguing.