The Rufous-bellied Heron is a medium-sized dark grey and chestnut heron.

Adult: The adult has blue black crown and head. The bill is basically yellow, most of the lower bill is pale yellow with a black tip. The lores, orbital skin and irises are yellow. The chin, throat, neck and upper back are dark slate grey. The upper wing is chestnut with black flight feathers. The lower back is dark brown grey whereas the rump and tail are chestnut. The undersides are chestnut. The legs are bright orange yellow and the toes may have red tinge.

In breeding, the develop long back plumes, up to 10 cm long. It is likely that the irises turn orange; bill and lores, coral red; and legs, pink in courtship or breeding (Beasley and Beasley 1985, Richards 1992). More information is needed.

Variation: The species is sexually dimorphic. The female is duller and the grey of the plumage is sootier or browner. Chin and foreneck have a buff white streak. The lores are paler, almost white whereas the bill is horn brown, with basal two-thirds of lower bill green or orange yellow. Neck and back are sooty brown with back plumes being shorter, 7-8 cm long. Chestnut parts are the same as male but the underparts are lighter.

Juvenile: The immature resembles the female, but has buff brown streaking on the sides of the head, neck and upper breast.

Chick: The young have grey down on back and white to grey on the underparts; bill is pale pink yellow to brown yellow at tip; legs are green yellow, more yellow to toes (Fry et al. 1986).

Voice: The “Kar” call is the typical call of the species, rendered as “caw” or “kraak”. The “Cherr” call, rendered “cherr, cherr” is used in pursuit flight. A “Twaa” call is used when bringing food to the nest. The nestling call is a soft “po, po, po”.

The Rufous-bellied Heron appears to have characteristics similar to both Ardeola and Butorides. To reviewers, it appears to fit better with the pond herons, given its sexual dimorphism, overall appearance, behavior, and habitat. However, some morphological characteristics resemble the Green Backed Heron (Payne and Risley 1976). For many years it was placed in its own genus, Erythrocnus. Resolution of the relationship of this species to Butorides and Ardeola is a candidate for molecular study.

The Rufous-bellied Heron occurs in central and southern Africa.

Migration: It undertakes seasonal movements associated with seasonal flooding of river floodplains. Additional documentation of the seasonal occurrence of this species relative to hydrological conditions is needed. Dispersal records are reported from Nigeria and elsewhere near its breeding range, such as eastern Zimbabwe and the Natal and Transvaal regions of South Africa (Lockhart 1996, James 1998).

Status: The species overall is local and generally uncommon. It is more common in the larger swamps, river systems and floodplains including, and northern Congo, Okavango delta of Botswana, Kagera River swamps and Usangu Plain of Tanzania and Rwanda, and Lake Bangweulu in Zambia and coastal Mozambique. It is patchy and rear outside the large wetland areas. It appears to be expanding its range in Tanzania and Kenya, numbering about 3,000-5,000 birds in Tanzania (Baker and Baker in prep.). 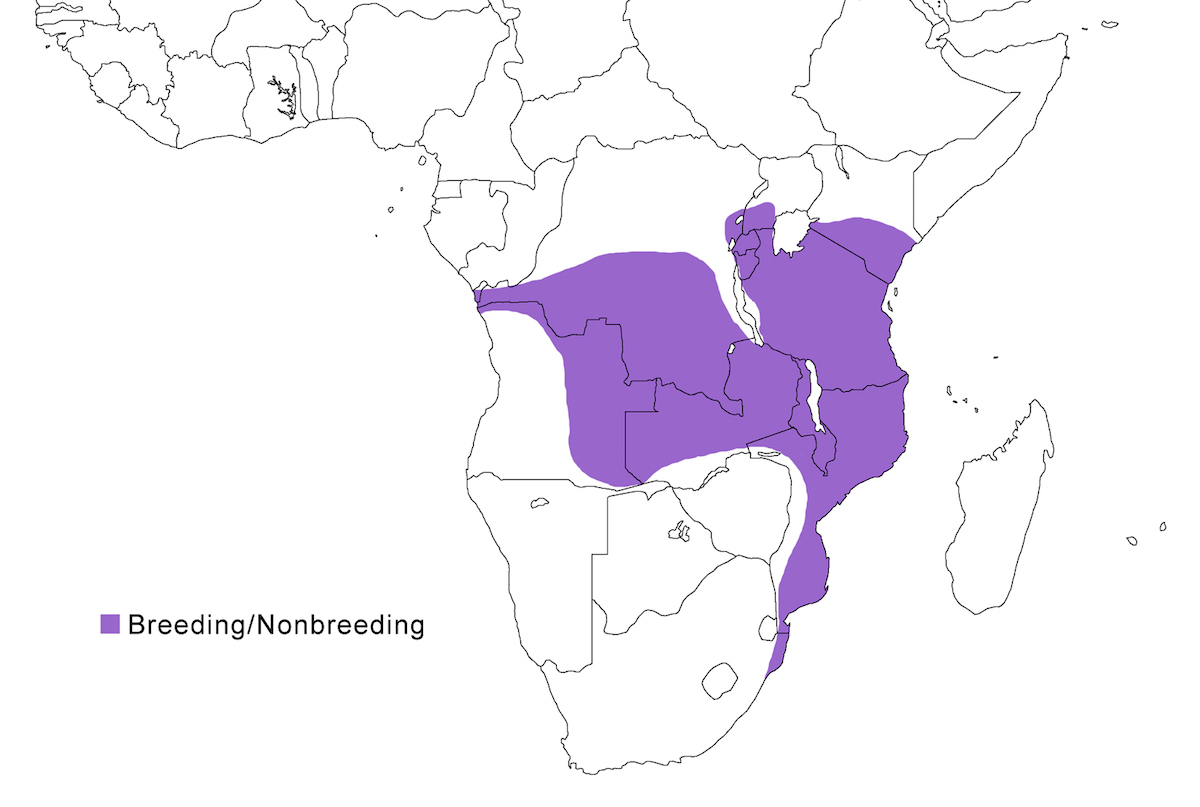 The Rufous-bellied Heron occurs primarily in seasonally flooded grassy flood plains, reed swamps, and the vegetated edges of water bodies. Among the habitats it has been reported from are dense reed beds, papyrus swamps, ambatch swamps, lake edge, and river edges. It appears to benefit from rice fields in the Usanga Plain of Tanzania (Baker and Baker in prep.).

This heron is usually solitary feeder. But it does sometimes occur in small groups of a dozen or more and at times with other species. It typically is diurnal, but also appears to sometimes feed at night. It feeds by Walking slowly in a Crouched posture. When disturbed, the species assumes a tall Upright posture. They roost in trees when not foraging The diet includes worms, insects, crustaceans, frogs, and fish (Tilapia, Barbus).

The breeding season depends on water conditions, taking place during the rainy season where water conditions are locally determined. However, where water levels reflect river flooding, it nests near peak water levels, even if this extends into the local dry season. It also is variable in its nesting chronology from year to year, depending on conditions. This variability can be seen in available data on laying dates (Brown et al. 1982): January–April and July–December in Zimbabwe, January–June and August in Zambia, December–January in Congo and Malawi, August in Botswana, April–May in Uganda, September in Namibia, February–March, May and December in South Africa.

It nests in reeds (Phragmites, Cyperus) or in trees and shrubs (Aeschynomene, Ficus, Acacia) usually but not always standing in water. The species is a colonial nester. It typically nests in small groups of 6-30 pairs, but 60-80 nests were reported at Lake Bangweulu in Zambia. It nest frequently in mixed colonies including Purple Herons, Marabou Storks (Leptoptilos crumeniferus) and Yellow Billed Storks (Mycteria ibis), typically at edge of colony.

The nest is a small platform 25-35 cm in diameter, 10-12 cm thick. It is made of primarily of reeds or twigs lined with reed stems (Fry et al. 1986), depending on the vegetation. nests are placed within the reeds or lodged in shrubs or trees. They may be situated close to upright stems or over the water and are placed low, generally from 0.5-4 m above water or ground level.

The courtship behavior of the Rufous-bellied Heron has not been described. Eggs vary from pale blue to uniform deep turquoise. They average 37.7 x 28.6 mm. Clutch size is 2-3, ranging 1-4. Incubation begins with first egg but the incubation period is not documented. The young hatch asynchronously, within intervals of two days.

Young mature rapidly and are active. They move around nest using wings as props by 5 days, stand at 7 days, leave the nest at 17 days, fledge at 24 days and can fly strongly at 32 d. At 5-7 days, bill is yellow becoming orange distally with dark tip and legs (Fry et al. 1986). Feathers begin to replace down at 14 days. Irises turn brown and legs yellow at 20 days. When alarmed they crouch in nest or jump into adjacent vegetation. Little is known about breeding success. Eggs are eaten by the Black Crake (Limnocorax flavirostra). Brood reduction occurs through starvation of smaller chicks and ejection from the nest by larger ones. Chicks are eaten by lizards (Varanus) and hawks (Circus).

Nothing is known about the population biology and demography of this species.

The principal conservation needs of this species are to obtain better information on its basic biology and to better understand its true distribution. Full protection of the Nyl River flood plain is essential for its continued survival as a breeding species in South Africa. Indications of expansion in Tanzania in response to increases in rice production (N. Baker and E. Baker in prep.) suggest the importance of rice fields in its conservation strategy.

The biology of the Rufous-bellied Heron is little known. There is a need for studies to determine its habitat choice, feeding behaviour, breeding biology and success, and seasonal movements. Its breeding distribution needs to be understood in more precise detail.

The Rufous-bellied Heron, like other Ardeola, appears to be a tropical reed bed heron. Many observations suggest that its habitat use is rather more complex though. It is a colonial nester, joining other herons in mixed colonies during the local high water period. It relies on quiet stalking techniques, as do the other pond herons. However, much more must be known to understand this species.