The Schrenck’s Bittern is a small dark heron with a chestnut (or spotted) back and lighter wings, a black stripe down the chest, a black cap, black tail, and in flight bicolored buff and black wings.

Adult: In the adult male, the crown and back of the head are black brown and the sides of the face are chestnut. The bill is relatively short and thick at the base (compared to the other small bitterns). The upper bill is dark horn brown whereas the lower bill is green yellow. The irises are yellow and the lores are olive green to purple pink. The back of the neck, upper back, upper wing scapulars, and rump are bright chestnut brown. Tail is black brown. The upper wing has a pale grey buff patch consisting of the wing coverts contrasting with dark grey flight feathers, paler at tips. The throat and foreneck are buff white, with a distinctive vertical dark rufous centerline. Upper breast is pale red brown. Lower breast and under sides are pale buff, clearly demarked from the darker back. Under wing is silver grey. Legs are dull green brown, yellow at joint and the undersides of the feet are yellow. Bill is black during breeding season.

Variation: Schrenck’s Bittern is sexually dimorphic. The female is smaller, with crown, face, back of neck, back, and upper wing dark chestnut, the back and upper wings with large white to buff spots. On the upper wing, flight feathers are dark brown, and so shows less contrast with the upper wing patch than in male. Tail is black. The throat is cream with black vertical stripes. The under sides are cream broadly streaked in brown. Under wing is silver grey.

Juvenile: The juvenile is dark chestnut spotted buff on back and upper wings. The under sides are broadly streaked in brown and white. Under wing is grey.

Chick: The chick has not been reported.

Voice: The “Squak” call is the flight call. The “Gup” call, rendered “gup, gup, gup” is a breeding call, probably a territorial and advertisement call.

Schrenck’s Bittern is identified by size, relatively deeper, shorter bill, its chestnut brown upper color demarked from paler under sides, dark throat stripe, black cap, black and buff upper wings, and grey under wings (Leader 1995b). It is distinguished from Yellow Bittern by being slightly larger, having a bill that is deeper at the base and more dagger like, its darker upper parts, less contrast of black and buff on the upper wing, and grey under wing. It is distinguished from the Cinnamon Bittern by being smaller (Payne and Risley 1976 but contrast with Leader 1995b), its chestnut brown (not cinnamon) back, grey under wings, dark (not rufous) flight feathers. Females and immature are distinguished from other small bitterns by the white and buff spots on the back and upper wing.

Schrenck’s Bittern is one of the small bitterns, Ixobrychus, which share similar plumage, white eggs, scutellate tarsi, and ten tail feathers. Its range overlaps the Cinnamon Bittern, but they differ in size and color. The species is distinctive among the small bitterns in the spotted color pattern of the female.

Schrenck’s Bittern occurs in China, east Russia, and Japan and in winter to Indonesia and Philippines.

Migration: Schrenck’s Bittern is migratory. Southward migration begins in August peaking in October. Return migration is April–May in the south and June in the north of its breeding range. Dispersal records occur from Myanmar in the west to Palau in the east. Extraordinary dispersion records include Europe.

Status: Little is known of the population status of this species (Lansdown et al. 2000). It is uncommon in Russia. In Japan, it is known to breed at only three sites. It is more common in south China. Migrants are recorded regularly as a migrant through south east Asia and Taiwan. There are very few records from wintering areas mostly of individuals, and so it is rare in Philippines and Indonesia. 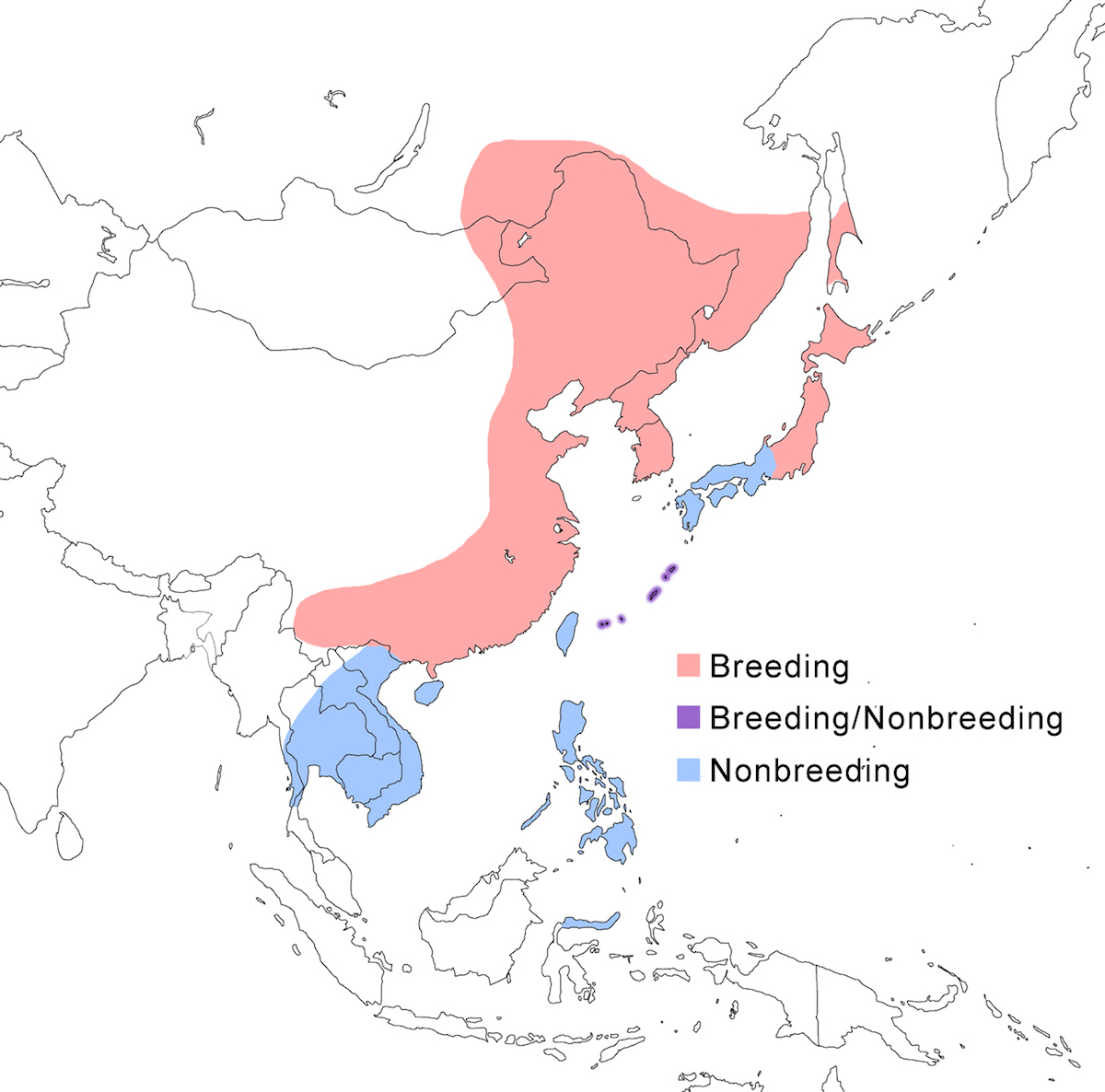 Schrenck’s Bittern occurs in low-lying areas in broad river valleys. It uses open grassy meadows and open marshes along river valleys, reed beds, and also rice fields. It seems to use relatively drier areas such as dry pastures with brush. It has been recorded as occurring in village ponds in east Russia.

Nothing is known about the feeding behavior of this species. It hides in the grass or assumes a Bittern Posture when alarmed. It feeds crepuscularly and at times during the day. It is known to eat small fish, shrimp, isopods, dragonfly larvae, and ground crickets. But overall there is a paucity of information on its ecology.

The nesting season is in the summer, May–August in Russia, China, and Japan. It nests solitarily in reeds and shrubs over or next to the water. The nest is a small cone, made of dry grass stalks with a lining of dry leaves and grass. It placed within 1 m of the ground, well concealed in tall grass or shrub.

Nothing is known of the courtship behavior of this species. Eggs are white. They measure 32 x 20 mm. The usual clutch is 3-5 eggs: Both parents incubate starting with the first egg. Incubation is 16-18 days. The male is reported to do most of the chick feeding.

This species is relatively easy to see, frequenting open marshes and rice fields. None the less, it remains uncommon to rare over most of its breeding and wintering areas, with the possible exception of south China. Mostly there is little information available. It is considered to be in the Category Data Deficient by HSG (Hafner et al. 2000). The principal conservation need for this species is for clarification of the breeding distribution and the identification of potentially important areas for their protection. Surveys of known and potential breeding sites should be undertaken and reported, especially in east Russia and east and south China (Hafner et al. 2000).

So little is known about the biology of this species that studies of its basic biology are urgently needed. Its status needs to be determined in the breeding range and its distribution in the non-breeding range.

The ecology of this species is essentially unknown. As one of the small bitterns, some aspects of its biology can be assumed, such as it is likely a marsh-dwelling, Standing predator. But there are few first-hand reports or observations of its biology or behaviour. Contributions can be made to understanding this species by general biological observations.