The South American Bittern is a stocky medium brown and buff, cryptic heron with a sooty brown forehead and barred crown and white chin and broadly brown streaked neck and breast.

Adult: The adult male South American Bittern has a sooty brown forehead becoming dark vermiculated bars over buff on the crown and neck. The sides of the head are ochraceous buff. The bill is pale yellow with a dusky edge and tip. The irises are pale yellow and a bright yellow streak at its base merges with the yellow green loral skin and yellow line over the eye. The chin and upper throat are white. The back and upper wings are buff barred and spotted with sooty black giving a variegated look. The flight feathers are sooty black. The foreneck and sides are white, vertically barred with rufous brown. The sides of the neck create an expansible ruff, which is particularly prominent in this species. The under sides are white to yellow buff streaked with dark rufous brown. The feathered upper legs are buff, barred in light brown. The legs and feet, with the very long toes, are yellow green. Courtship related changes have not been described; however, reports of orange brown and cinnamon rufous irises are likely related to courtship (Wood 1986).

Variation: The sexes are similar but females average smaller. Geographic variation in the apparently disjunct population in south Mexico is recognized as the subspecies caribaeus. Compared to pinnatus, this population is generally paler, less ochraceous, has sand buff sides of the face, less buff almost white undersides, less streaking on the lower throat, and bill averaging shorter but with overlap (Dickerman 1972). Considerable individual variation also exists throughout the range of the species.

Juvenile: Immature birds resemble adults, but are paler, and have less bold barring on the upper parts.

Voice: The “Boom” call is the booming roar call characteristic of the large bitterns, rendered “oong, kachoonk”, used in territorial defense and advertising. The South American Bittern’s Boom call is higher pitched and less hollow than the pumping call of the North American Bittern (Birkenholz and Jenni 1964). The “Kwak” call is the alarm call, rendered “kwaak, kwaak”. The “Ro” call, rendered “ro, ro, ro”, is the call used when taking flight.

The South American Bittern is identified by its buff and black barred appearance. In full flight the wing beats are noticeably quick. It is distinguished from the North American Bittern by its black barred (not plain buff) crown, rufous buff (not grey buff) base color, barred and vermiculated (not finely spotted) upper parts, larger size, lack of a black mustache, and higher pitched Boom call.

The South American Bittern is one of the four large Botaurus bitterns, which all have streaked brown plumage, scutellate tarsi, 10 tail feathers, and a booming call. It differs morphologically from the North American Bittern and from the two Old World bitterns (Payne and Risely 1976). It is likely more closely related to the North American Bitterns than the Old World species (Payne and Risely 1976, Sibley and Monroe 1990). As currently understood the species has three disjunct populations, one of which has been identified as a distinctive subspecies.

This bittern occurs in central and north South America and Central America to Mexico.

Migration: There is no evidence of migratory movements in this species in the north of its range. However in the southern portions of north Argentina, Uruguay, Paraguay, and south Brazil, it has not yet been reported outside breeding season. Migration would be expected in more temperate areas based on the other large bitterns.

Status: Throughout its range, its known status is rather localized. It is common in some localities in Mexico. Its status in Brazil is unclear but is reported from throughout the country (Sick and Belton 1993), but its occurrence in the Amazon and Mato Grosso has not been recently confirmed (Morales 2000). It is rare to uncommon in north Argentina, its first confirmed nesting having been only recently reported (Di Giacomo 1997). 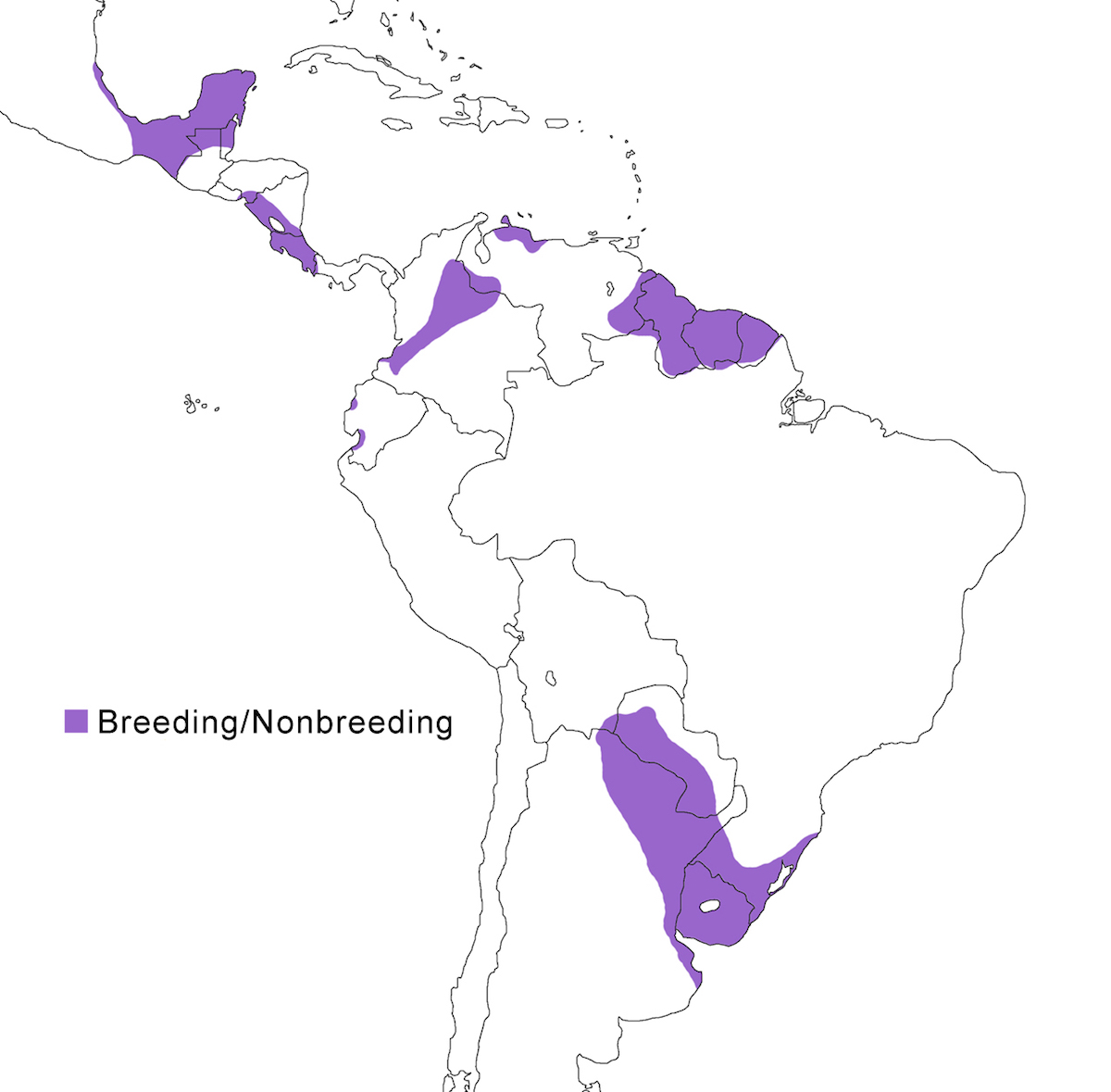 The typical habitat is dense, flooded freshwater marshes and swamps, thickly overgrown with tall reeds or rushes. Altitude is not restrictive in that it occurs up to 2,480 m in the Andes.

The South American Bittern feeds by Walking Slowly, creeping forward in very deliberate manner in Crouched posture, with its body almost parallel with the ground. It mostly feeds at night, and feeds alone or in loose groups. The bittern’s diet consists primarily of fish (Myrophis), frogs (Pseudis), snakes (Ophis), and insects such as dragonflies (Odonata) and bugs (Hemiptera).

The nesting season is variable across its range and not well documented. It is July–October in Trinidad, May–July in Mexico and Central America, February–April in Brazil, October in north Argentina. They nest in herbaceous marshes with tall, dense vegetation over standing water or waterlogged grassland. They also occur is wetlands bordering rivers, rice fields, and sugar cane fields. Solitary nests are situated with the dense plant cover including Typha, Scirpus, Phragmites, Paspalium, Eryngium.

The nest is a platform built of dried reeds and other plants. In Argentina, a nest was 35 cm wide and only 3 cm deep (Di Giacomo 1997). It is built into the herbaceous vegetation just above water level. Detailed descriptions of nests or range of placements are scarce. Breeding displays have not been well reported. The “Boom” call is given in the nesting territory as a territorial and an advertising call. Males defend their territory with displays that include erecting their neck ruff feathers (Teixeira and Nacinovic 1985).

Eggs are reported as olive and as straw yellow. Eggs measured 49.5 x 36.3 mm in Trinidad and 51.2 x 40.3 and 52.4 x 40.7 in Argentina. The clutch is 2 or 3. Incubation may be only be the female, but the details and incubation times are unrecorded. Very little is known about the nesting biology of the species.

Nothing is known about the population biology and demography of the species.

The status and actual dispersion of the South American Bittern are very poorly known. It is widespread over a large range so there is no evidence that it is threatened. Because it is seldom seen, it is likely more common than presently documented. The first step of conservation action must be to better define its dispersion, breeding population status, seasonal movements, and habitat requirements.

Little is known about the behaviour and ecology of this species, including such basic information as precise habitat requirements, breeding behaviour, degree of polygamy if any, nesting season, food and foraging, and demography. Study of the basic biology of the species is needed. The actual range of the species in Central and South America requires clarification, particularly in the apparent range gaps in north Central America, Panama, the Amazon, and also in west Brazil. As more specimens become available, the subspecific taxonomy, especially of the apparently disjunct populations, should be reexamined. It is not clear whether the species, particularly southern populations, are migratory. Seasonal movement patterns need to be better understood.

Like the other large bitterns, this is a species of deep, dense reed swamps and marshes. They feed alone or in small groups by Standing and Walking on the vegetation waiting for fish and other prey to appear. Much remains to be understood about this species.