The Streaked Bittern is a small sandy heron with a black crown stripe and heavily black streaked back.

Adult: The Streaked Bittern has a prominent black stripe along the center of its crown from the forehead down the back of the head. The very slender bill is yellow brown. The irises are pale yellow. The hind neck is sandy buff. The back and upper wings are sandy buff heavily streaked with black. Flight feathers are dark buff with tips rufous or cinnamon buff. The throat and under sides are white streaked with buff. The legs and feet green yellow.

Juvenile: The juvenile is not described but is presumably similar to the adult.

Chick: Down of the chick is buff above, greyer below.

Voice: The voice has not been documented.

The Streaked Bittern is identified by its black streaks on a yellow buff background. It is distinguished from the Least Bittern by its streaked yellow buff (not green black) back, light wings, and narrow dark crown (not full dark cap).

The Streaked Bittern is one of the small bitterns, Ixobrychus, which share similar plumage, white eggs, scutellate tarsi, and ten tail feathers. It is the only one with streaking on the back. The similarity or distinctiveness of the northern and southern populations is unclear.

The Streaked Bittern occurs in northern and southern South America.

Nonbreeding range: The status of the species in the Amazon is not clear. It has now been reported outside breeding range at three sites in northeast Brazil, in Piaui, Maranhão, Sergipe (Olmos and Barbosa 1988). Similarly a range extension to southeast Peru (Madre de Dios - Terbough et al. 1984) covered a few months without evidence of breeding. Determining whether breeding or nonbreeding birds occur in these areas is crucial to understanding the range and status of the species.

Migration: The migratory situation in this species is similarly unresolved. In some places birds occur all year (Chile, Brazil, Argentina) but others it is reported seasonally (Suriname, Argentina, the Amazon) suggesting migration or populations shifts.

Status: There is very little known about the status of this species as no quantitative or trend information is available. It is widespread in South America and probably occurs over a much wider area than is now known. It is reported to be common in some parts of its range, such as Argentina and Colombia, and is likely more common than is appreciated (Morales 2000). 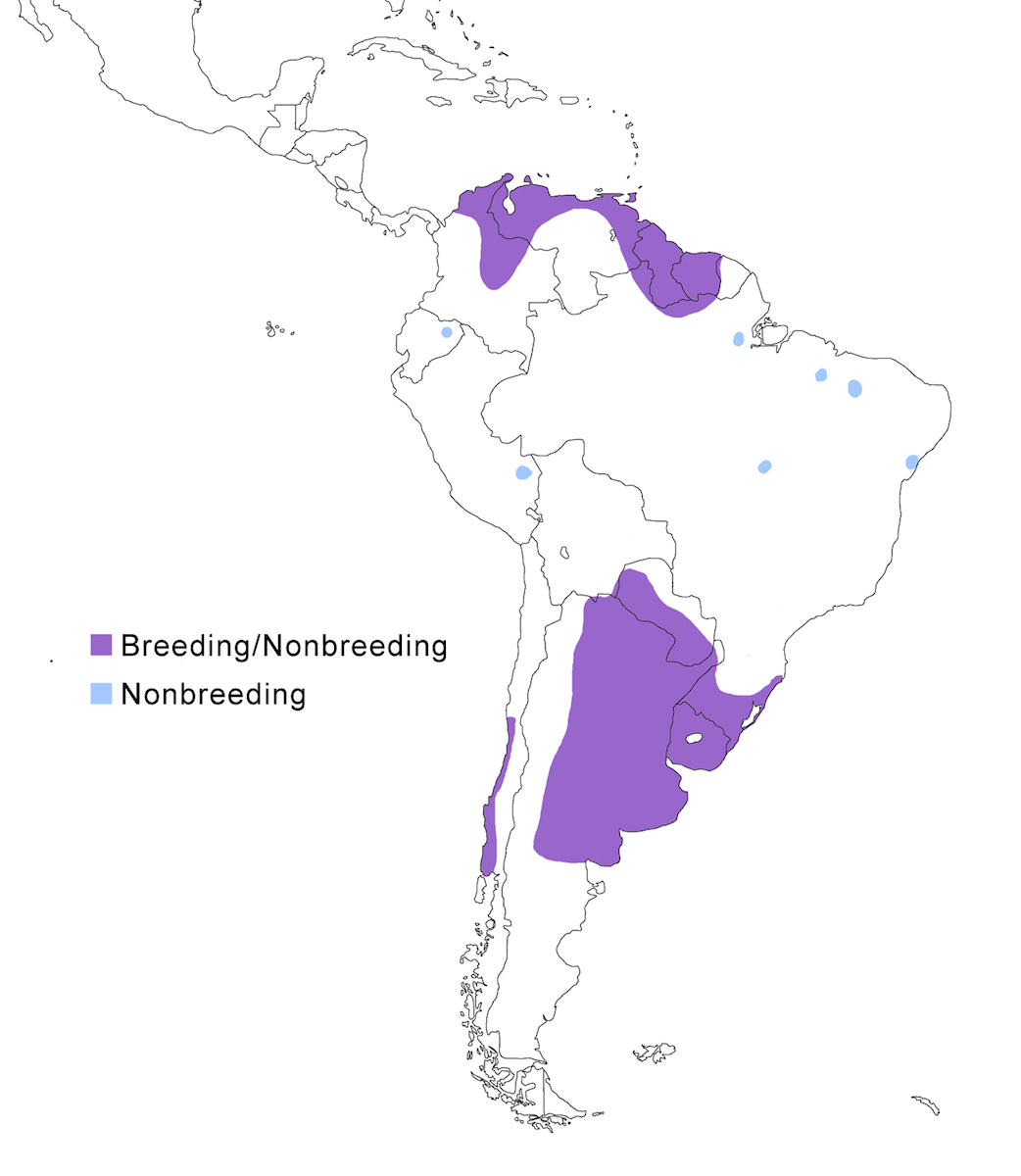 The Streaked Bittern usually uses dense marshes and reed beds with tall emergent grasses or sedges. However it now appears that it is not restricted to this habitat in that it also has been recorded in rice fields, along fast mountain streams and in the high Andes surrounded by agriculture and pasture (Scott and Carbonell 1986). In Brazil it was recently encountered and reported on the shore of an artificial lake surrounded by dry land vegetation (Olmos and Barbosa 1988). Although occurring primarily in the low lands a breeding population occurs at 3500 m in the Argentinean Andes (Scott and Carbonell 1986).

Like other small bitterns, this species probably feeds by Standing and by Walking. It has been reported to move quickly through the reeds, running up and down with incredible agility. It feeds alone or in pairs at night. When disturbed it quickly adopts the Bittern Posture, freezing and elongating itself and keeping its underside facing the intruder. This bittern is seldom flushed. It flies clumsily before diving back into cover. It eats small fish (Lebestes), crustaceans, insects, including dragonflies, dragonfly larvae and water beetles (Dytiscus).

Nesting is reported from July to October in the north (Trinidad) and October–December in the south (Argentina). It nests solitarily in marshes in thick patches of sedge or rush. Nests are small inverted cones or platforms made of stems of herbaceous plants (rushes, etc.). They are attached to the emergent herbaceous plants and placed 30-60 cm above the water.

The population biology and demography of this species is unknown.

This is a little known species, and the first step in its conservation is to increase basic knowledge of its distribution, breeding locations, and habitat requirements. It is considered Data Deficient by the HSG (Hafner et al. 2000).

The Streaked Bittern remains the most enigmatic and least-known representative of the small bitterns. Patterns of geographic variation, if any, among the northern, western and southern populations need to be examined. There is a need to understand its habitat use, especially its use of man-altered habitats. It is necessary to determine if the species is migratory and where it nests or spends non-breeding periods and its biological overlap with the Least Bittern. Determining the range and breeding range of the species in the Amazon is a top priority. The species should be looked for from the Andes slopes to the Atlantic and also in the Orinoco.

Very little is known about the basic biology of this species. It occurs in extremely dense vegetation where observations are difficult. Consequently, we know only that it feeds within dense reed beds or marshes probably on fish and insects. Recent information showing its use of atypical and human-altered habitat broadens the perspective on its habitat use. Similarly, recent information on its occurrence over a much larger range, may lead to revising our understanding of its distribution, movements, and annual cycle. Much more needs to be understood about this species.