The Sumatran Heron is a very large, uniformly brown grey heron with a large stocky bill and white throat.

Adult: The Sumatran Heron has a brown grey crown with silver grey head plumes forming a short crest. The very large heavy bill is black above, whitish yellow to greenish below. The irises are yellow to silver brown and lores yellow to green. Upper throat is light grey, an important field character. Its dorsal color is grey with a brown grey wash to head, back, and neck. The lower throat and neck are brown grey and the rest of the under parts are lighter. Wings are a dark brown grey and are lighter underneath. Legs are dusky grey to olive grey.

In breeding season, the grey back and under parts take on lighter highlights. Its throat and center of the breast become distinctively white, and it develops silver grey plumes on the lower neck and breast. The bill, while remaining black, develops a yellow green tip and a yellow patch at its base. Irides are silver brown to yellow. Lores are olive yellow to blue grey. A male has been recorded with blue grey lores during nesting. Soft part color variation needs additional confirmation.

VARIATION: The sexes are alike. Clinal variation is likely. Birds tend to be darker in the humid eastern part of its range and paler in the drier west. Northern Australian birds, described as being browner than northern birds, almost bronze, with a shorter tarsus and longer, have been considered a subspecies, mathewsae. But these distinctions have not held up to further study.

Juvenile: Immature birds are lighter colored than adults, a rusty brown, with rufous or sandy-buff wash on the back and under parts, and no crest. Bill and legs are brown.

Voice: The Sumatran Heron is highly vocal (Dahlberg 1998). Its call is amazing among heron vocalization, It is a deep guttural, resonant Roar, emitted especially at night, when disturbed and in defense at the nest. The Roar call is likened to an angry bull or crocodile (likely the origin of two Australian common names). The call lasts several seconds, repeated 3-4 times, with seconds between calls (Seton 1972), and it may develop into a double roar (Marchant and Higgins 1990). Other calls include croaks, booming, and the sound of a small engine. The vocalizations of this heron deserve additional characterization.

The Sumatran Heron is identified by its size, grey color, and uniform grey wing color. It is larger than other herons in its normal range. Its flight is heavy or ponderous with head back and legs dangling. It is generally shy and retiring and usually seen alone. It flies short distances in response to disturbance but is more likely to walk away slowly into the bushes upon disturbance

One of the great herons, its appearance suggests that it is probably most closely related to the White Bellied Heron. Additional study of geographic, particularly clinal variation, is needed, especially to re-examine the Australian birds once described as a separate subspecies.

It is usually called the Great-billed Heron in Australia, but this common name is not distinctive outside of Australia where it can overlap other great herons, so Sumatran Heron is the preferred English name.

The Sumatran Heron is a bird of south East Asia through Australia.

It is known as a nesting species in two distinct areas. The northern population remains in coastal Indo-China, islands off the south west coast of Thailand, and the Andaman Islands. The southern population occurs through Indonesia south to north Australia. In Australia the heron occurs along the coast of north Australia from West Australia to Queensland, except for the Gulf of Carpentaria (Maddock 2000). It occurs inland very rarely.

MIGRATION: This is a sedentary species, although post-breeding dispersal may occur, in that there are dispersal records .

Status: This species was once distributed widely throughout coastal south east Asia, but it has been much reduced on the mainland during the past 50 years. Since the 1970's, it has been reported in Asia only from southern Indo-china and coastal islands off Thailand and Malaysia (Lansdown et al. 2000). It is not abundant anywhere in its remnant range and is considered to be scarce in Papua-New Guinea (Beehler et al. 1986). It is common in northern Australia and as far as is known, its population is stable there (Maddock 2000). 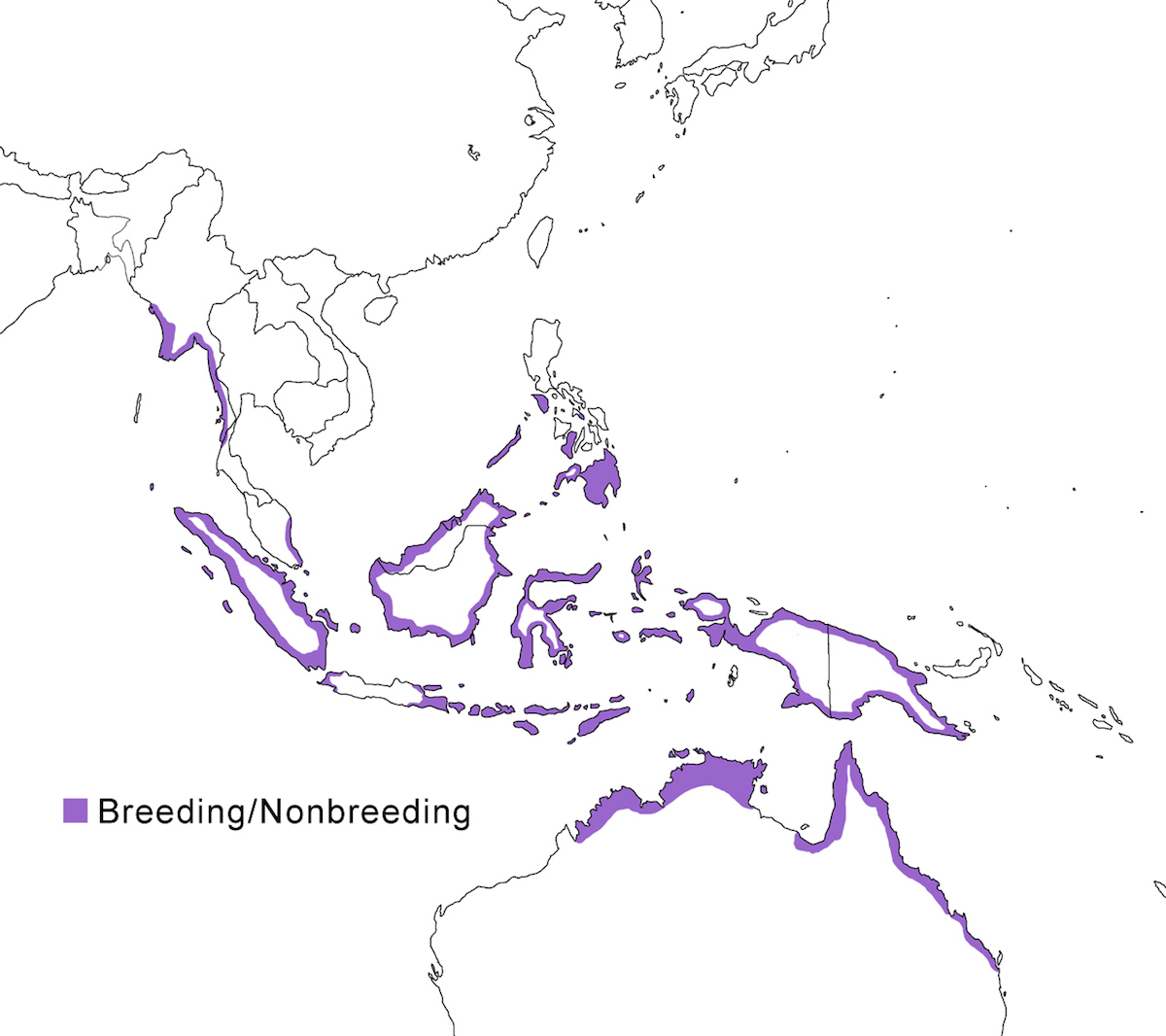 This is a solitary hunter, rarely in pairs or in small apparently family groups. It is a shy species, avoiding human disturbance. It feeds typically on outgoing to low tides, roosting on high tide and is principally crepuscular outside nesting season.

Its feeding approach is Standing at the edge of streams or Walking Slowly along mangrove-lined creeks with deliberate steps, wading through water up to 30 cm deep. Individuals and pairs permanently occupy feeding locales along rivers and shore, which they probably defend as feeding territories. Forward displays are used against intruders (Lansdown 1989). A strutting terrestrial display was described between two birds (Gill 1979) in which they raise their crests, cock their tails, droop their wings, and fan their tails. This could be a contact display or, more likely, an antagonistic display.

The Sumatran Heron is a solitary, highly dispersed species with specific habitat requirements, of mangrove swamps with tall trees and open mudflats nearby. Its density has is estimated to be about one pair per 600-700 ha or one pair per 5 km of river (Garnett in Lansdown et al. 2000).

It principally eats fish. The massive bill suggests that it must be capable of dealing with very large prey, including mussels and crabs. No detailed studies of foraging ecology or food habits have been conducted.

They nest in May and June and during breaks in the monsoons. In Australia nesting has been recorded in July, November, February, March and April. Nesting primarily is in mangrove trees, usually Avicennia, large enough to support the nest.

Fundamentally it is a solitary nester, but occasionally nests adjacent to mixed colonies (Lansdown et al. 2000). There may be multiple nests within what appears to be a single territory, an observation deserving further scrutiny. Few descriptions of nesting are available. Nests are a large (120-130 cm wide), thick (30-40 cm) but flat platform made of large sticks with finer twigs and fresh leaves inside. It is placed low, up to 2.5 m high, usually overhanging water well hidden by dense mangrove branches although more open situations have been reported.

As pairs remain together year round, courtship and pair contact behaviors also probably occur year round. Lansdown (1989) described several pair maintenance behaviors given away from the nest. These include Stretch, Fluffed Neck and Bill Dueling. One case a bird responded to a Stretch by its companion with a Fluffed Neck.

Eggs are pale green blue, slightly glossy and minutely pitted. The size is 62.5-71 x 46.5-49 mm. Clutch appears to be two. Its nesting biology is little known. Both adults tend the nest and the young. Often only one chick survives to fledge. When disturbed nestlings assume a Bittern Posture and adults give their Roar call, a loud warning call.

Nothing is known about its population dynamics.

The species is rare in continental Asia and not common anywhere in its range. It is considered to be near threatened (Kushlan and Hafner 2000), As is the case with the other great herons, it inherently has small and dispersed populations, is highly specialized, and threatened by habitat changes. The site where five nests were found in Malaysia was subsequently reclaimed (Lansdown 1987a, Lansdown et al. 2000). The distribution of nesting birds needs to be better understood and nesting sites protected, Important areas include the Salu-Sudong-PaiwaiSenang group of islands south of Singapore, the Rhio-Lingga Islands, and the Kinabatangan River basin in Borneo (Lansdown et al. 2000). The principal habitat for this species is mature coastal mangrove swamp and associated mudflats and coastal islands. These habitats are under particular threat throughout the species’ range due to reclamation and stream damming, Protection and management of coastal mangrove habitat are essential for the conservation of this species.

So little is known about this species that studies of its basic biology are essential. Its population status throughout its range must be determined and important sites identified and protected. Extensive nesting season surveys for nest sites and feeding habitat are needed.

The Sumatran Heron is a large, solitary bird of the heavily vegetated coastal zones of east Asia, especially mangroves where it feeds by patiently Standing during outgoing tides. So little is known about it, that even its most basic biological characteristics are guesses. It has always been little understood. It took from its discovery in 1822 until 1906 for its nest to be reported. As a fish eater, it likely specializes in catching a few large fish, which it can dispatch readily. Its food resource is probably generally scarce and the bird has to be as effective as possible in catching what happens by its feeding site.