The White-backed Night-Heron is a nocturnal medium dark heron with a large white eye ring on a dark head and white plumes on an otherwise dark back.

Adult: The White-backed Night-Heron has a black head and a short, thick crest, strikingly setting off a large white patch around a relatively huge eye. The bill is black, with yellow its lower base. Irises are dark brown and the lores are green yellow. The chin is white and the neck is rufous brown. The back is black brown with white lanceolate plumes forming the dorsal patch, which is conspicuous at times and inconspicuous at others, probably related to breeding. The upper wings are brown; flight feathers are slate. Tail is black brown. The under parts are pale buff and brown; belly is white brown. Legs and feet are green to orange yellow. In breeding, irises turn red, chestnut, amber, yellow, probably in a sequence not yet described. The lores are lemon yellow.

Variation: The sexes are alike. Geographic variation is unclear, but South Africa birds have been described as natalensis.

Chick: The chick is covered in olive brown down with buff feather tips. Bill is green grey. Irises are brown. Legs are green grey. Feet are yellow green.

Voice: The species is generally quiet. The growling “Taash” call, rendered “taash, taash, taash” is the disturbance call. The “Kroak” call is the alarm and flight call.

The White-backed Night-Heron is identified by its relatively large, dark head and huge eyes

accentuated by the white eye ring and its white back patch. It is distinguished from immature Black Crowned Night-Herons by its smaller size, large head, white back patch, and more spotting on the back and wings.

The generic identity of the species is not well settled. It has been variously assigned to Nycticorax and Gorsachius. The taxonomy of these night herons need to be further examined to determine both genus and species limits.

The White-backed Night-Heron occurs in Africa, south of the Sahara.

Migration: The species appears to be sedentary, although it is likely that they undertake movements correlated with the onset of rains, but more information is needed on this secretive species.

Status: It is widely distributed through central and southern Africa but rare to uncommon. It may be most abundant in the Congo swamp forests and upper Zambezi in Zambia (Turner 2000). 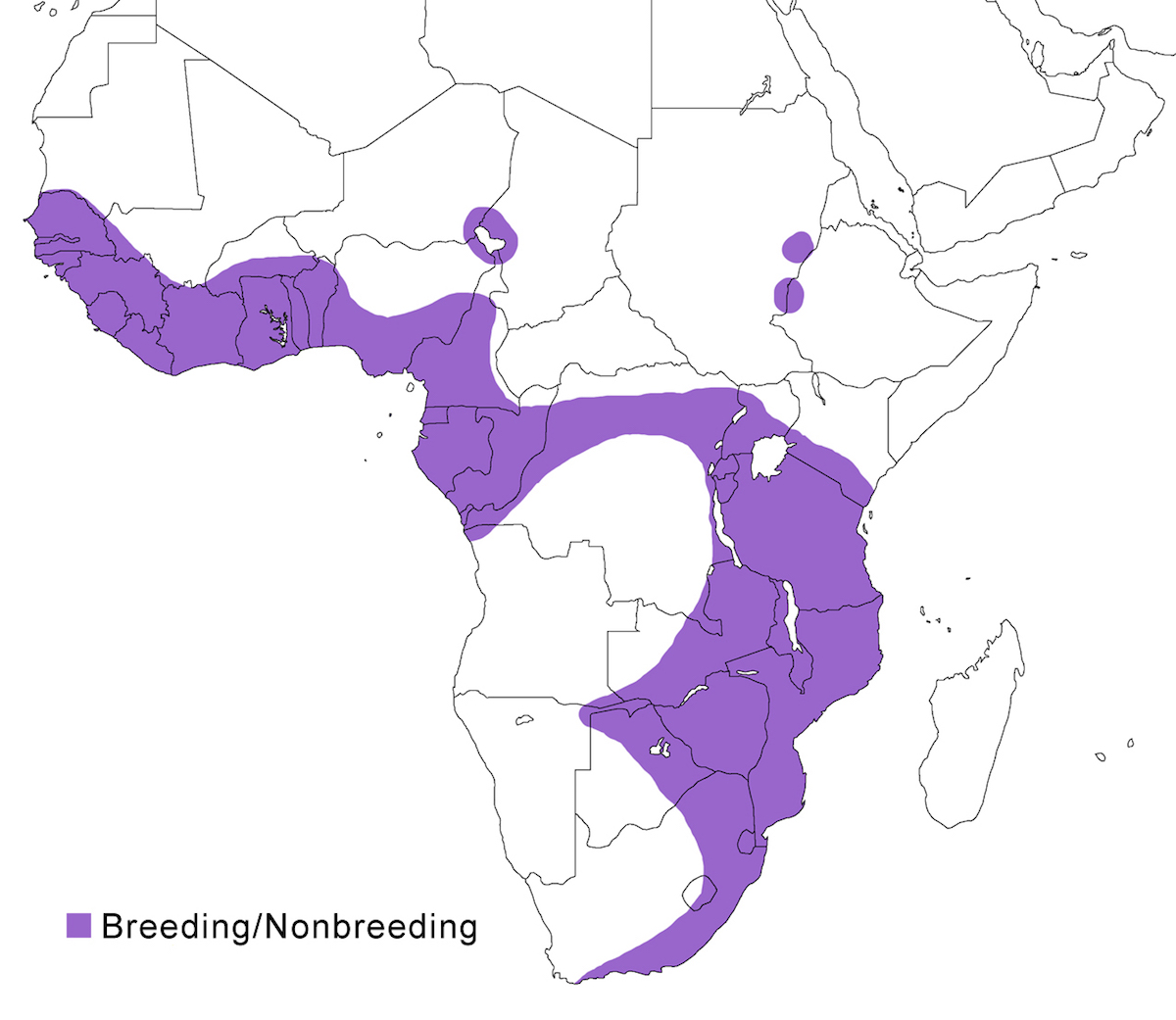 The White-backed Heron is a forest heron. It occurs in densely vegetated forests near water, especially along with tree-fringed streams, on islands in large rivers and lakes (Jonasi 1994), mangrove swamps along both African coasts, and forested lakes. It does also uses reed beds and dry forests. In places (Gabon) it is found close to human habitations, but this is not general.

This appears to be very much a strictly nocturnal species. It has been observed feeding primarily at the water’s edge, along muddy banks, and in the reeds along water courses. It feeds by Walking slowly along and in shallow water and by Standing on vegetation such as rafts o floating reeds. It feeds alone or in pairs in and near dense vegetation. Both adults and young assume a bittern posture on disturbance (James 1988, Bock and Medland 1988). Its diet is little known but it does consume fish (Blasdale 1984), amphibians, mollusks, and insects.

Breeding season is variable, usually at the height of the local floods, which varies from place to place, and time to time. It nests in July–January and also March–April in South Africa, August–December and also January–June in Tanzania, May–June in Kenya, September–October in Nigeria.

The White-backed Night-Heron nests low in trees, bushes, reed beds, and on rocky shores in caves (Edwards1988). It nests solitarily and nests are placed close to the water or ground. They are large and bulky platforms made of sticks or reeds lined with smaller pieces of the same material. They are 25-30 cm across. Nests are generally close to the water, usually within 1 m but sometimes 3 m. It also nests on the ground in reed beds.

Nothing is known about the courtship or nesting behavior. The eggs are green white, 45.7 x 35.1 mm. The are probably laid at intervals of 48 hours or more. Clutch is 2-3 eggs; range is 2-5. The herons will sometimes double clutch. Incubation is 24-26 days. The often young grow to considerable size before leaving the nest at 6-7 weeks old.

Nothing is known about the population dynamics and conservation of this species.

The White-backed Night-Heron is a widespread but scarce bird, and is secretive, making surveys and monitoring difficult. A first step in conservation is to determine the species’ distribution, habitat needs, and population status. This will require surveys throughout its range. The dependence of the species on swamp and riparian forests makes it vulnerable to the effects of harvesting of such forests throughout its range.

Owing to its secretiveness, dispersed range, and difficult habitat this is one of the least understood herons. Studies are needed of its basic biology, including nesting, courtship (including the function of the dorsal plumes), foraging, food selection, dispersal, and habitat requirements. The evolutionary relationships of the night herons are not clear and a comparative study of the species is needed.

This night heron is a nocturnal, forest dweller that feeds secretively on the edges of cover tending to nest in the local flood season. Little is known about its feeding behaviours, food taken, or environmental correlates of foraging or nesting success.