The White-bellied Heron is a very large brownish grey heron. It is the second largest living species of heron.

Adult: The crown appears blackish; crest feathers are pale tipped with grey. The massive bill, 152-176 mm long, appears blackish; the lower bill is rather dull yellow-green at the tip, on the top edge and at the gape. The irises are yellow, tending to ochre, while the loral and orbital skin is green yellow. The neck is mostly grey. The upper parts are slaty with a distinctly brown tinge with the upper wing appearing solid grey. The chin and under parts are white. The under wing is grey, with contrasting white wing linings. The legs and feet are dull grey.

Variation: The sexes are apparently alike.

Juvenile: The immature bird is browner with white belly, but otherwise similar to the adult.

Voice: The voice is a loud, deep croak.

The White-bellied Heron is identified by a combination of large size, grey color with white under parts and, in flight, grey upper wing and grey under wing contrasting with white linings.

It is distinguished from the Grey Heron by its large size, especially the large bill, and the lack of dark “shoulder” patch. It is distinguished from the other great herons in its grey neck and brownish back. The larger Goliath Heron has a chestnut neck. Their normal ranges overlap in Bangladesh. The smaller Sumatran Heron has grey and uniformly grey under wings. Their normal ranges overlap in Burma. The White-bellied Heron occurs principally in forest, whereas the other great herons occur in more open wetland. It is distinguished from cranes in flight by flying with its neck crooked back, not outstretched.

This is one of the great herons, related to the other Ardea, and most closely related to the Sumatran Heron. The two specific names imperialis and insignis are used in the literature as are the two English names. The acceptable name has been a matter of prolonged debate (Baker 1935, Biswas 1960) resolved by Ripley (1982). Of the two oft-used English names, “Imperial” is derived from the incorrect scientific name and is not particularly descriptive. White-bellied Heron is the more appropriate English name.

The White-bellied Heron ranged historically from the Indian subcontinent through south east Asia.

Breeding range: Its recent known distribution is India (Arunachal Pradesh, Assam), northeast Bangladesh, Bhutan. This range is a substantial reduction from what is suspected to have been its historic range, which however is poorly known. It appears to have extended from the southern foothills of the Himalayas in Nepal and India (Assam, West Bengal, Arunachal Pradesh, Nagaland) (Choudhury 1992, Anon. 1994, Sugathan et al. 1987, BirdLife 2001), south to Bhutan, northern Myanmar, and (based on recent information) apparently Bangladesh and it has been reported from the Sundarbans (Scott 1989). As far as is known it no longer occurs in Nepal, south Myanmar, or Assam (Inskipp 1989, BirdLife 2001).

Migration: The Great White-bellied Heron is not known to migrate, but likely post breeding dispersal occurs especially from lower marshy sites during the rains. Records from southeast Myanmar (Toungoo, Pegu) and India (Tamal Nadu) are far from expected breeding range. Observations in China in the 1930’s may have been of this species (BirdLife 2001).

Status: The species is very rare and rarely reported, even historically. Individuals have been seen recently primarily in Bangladesh, Assam and Bhutan (Inskipp and Inskipp 1993a, b, Harvey 1990, Thompson et al. 1993). It has also been reported recently from the Sundarbans (Jepson 1987).Overall it has very small population that gives every indication of continuing to decrease. The Indian population is no more than in the low hundreds. It is very rare in Bangladesh, regular in Bhutan, and rare in Myanmar (BirdLife 2001). The worldwide population is probably under 250 birds (Kushlan and Hafner 2000), although it has also been speculated that the population could be 250-1,000 individuals (BirdLife 2001). 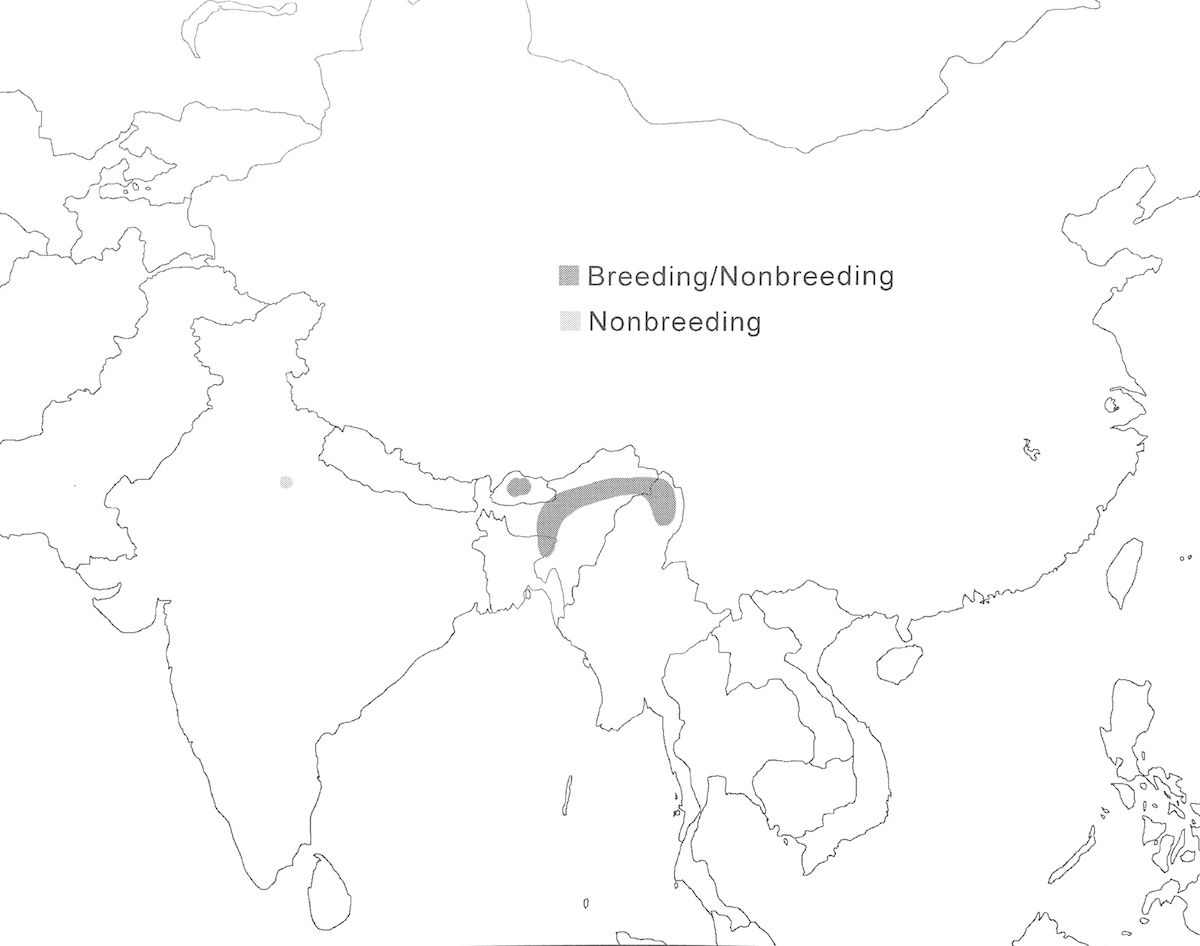 This is a heron of large inland swamp forests and forested rivers and less frequently submontane grasslands. It appears to depend on mature forests having large trees for nesting associated with wetlands, rivers or lakes. In the southern Himalayas its habitat included the dense forest and rivers (duar) and the terai, an often-marshy area of elephant grass and dense forest patches dependent on soil washed down from the mountains. Elsewhere in its range, it occurs in patches of remaining mature forest (Perennou et al. 2000). It primarily uses riverine sites for foraging, especially during nesting. These range from sandy and shingle beds in large rivers to small forested streams. It has occurred to 1,500 m in India.

This is a solitary species that is most often seen alone or in pairs, and rarely in parties of 4-5, which perhaps are family groups. It feeds characteristically by Standing in fast flowing rivers. It also uses slow moving streams and grassy marshes. There is some indication that habitat choice varies seasonally, using rivers in summer and slow flowing watercourses in winter (BirdLife 2001). It feeds primarily at dusk, and less frequently during the day hours.

It is reported to be quite fearless. Its diet has not been documented. It is known to take large crayfish. It is thought that it would also eat fish, but its diet remains to be determined.

The only information available suggests nesting in April in Myanmar and July and August in the Himalayas, which is the height of the monsoon, but the identity of this record is not assured. It nests solitarily in tall trees in dense forest. Few nests have been reported, all were very large structures high in trees. Nothing is known of the nest behavior or courtship or other displays of this heron.

The population dynamics is unknown. As a large species in mature and stable habitat, it is likely a long-lived bird that occupies its territory for many years. As a solitary species with a large range, its population densities were likely never high.

This is an exceptionally rare heron, about which little is known, including its current range, to say nothing of its population status. As a bird of mature forests, its habitat has been under severe threat throughout its range for a century. Although historically nearly inaccessible, its wet forest habitat has been cleared through much of central Asia. As a species that probably has always been scarce, habitat destruction and lack of protection pose the primary threat to its continued existence. Forested habitat is being destroyed by slash and burn agriculture in Arunachal Pradesh. It nests in Namdapha National Park and occurs in other protected areas in the non-breeding season. Lowland we lands of Brahmaputra are threatened by siltation, plant growth, and fishing. Large-scale habitat a ation of its prime habitat is occurring in Myanmar and Bhutan. The Bhutan nesting area is affected by rock mining operations.

It is a species that apparently is adversely affected by human disturbance, as evidenced by its occurrence primarily in remote forests. Human traffic and movement of domestic animals cause disturbances in the forest. In addition, birds are likely at risk from hunting of all sorts. Local people kill birds at the nest, obtaining them using long bamboo poles. It is likely that hunting has been a principal cause of loss of individuals. The species is endangered (Kushlan and Hafner 2000, IUCN 2003). It is protected in Myanmar and in Bhutan, both legally and culturally. Legal protection for the species is needed in India and Bangladesh and serious protection is needed for parks and reserves in which it is found (Hafner et al. 2000). The most important of these is Namdapha National Park in Arunachal Pradesh, Jamjing Reserve Forest in Assam, and the newly discovered sites in Bhutan (near Wangdue phodrang and Punakha).

Little is known of the biology of this heron. Its current distribution needs to be determined. Surveys need to be conducted in search of this species, and naturalists within its range should be encouraged to report all sightings. Nest sites need to be located (and positively identified), nesting and feeding habitat better defined, and whether the species migrates or disperses needs to be determined in order to locate important areas. A conservation plan is needed to guide conservation action once individuals and especially nests are found.

This is a very large, solitary heron of Asian forests and marshlands, requiring ever-decreasing mature damp forests and dense marshes. What is known of its biology, such as its dependence on tall trees during nesting, its ability to feed by Standing in fast-flowing rivers, and its occurrence primarily in sites remote from human activity, suggest that it is a highly specialized species. It is however little known biologically, and critically endangered from both habitat loss and human depredation. It is, in fact, one of the most threatened of all the herons.

§§§ Check out the White-bellied Heron Working Group and its website to learn more and get involved with current conservation efforts. 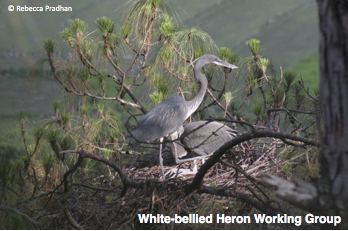