The White-crested Tiger-Heron is a slender, medium, cryptically colored, black and buff barred heron with a white crest, visible when erected.

Adult: The adult male has a black crown and nape, and a white crest, which is typically concealed by the darker feathers except when raised. The bill is long and slender. The upper bill is black brown whereas the lower bill is yellow green. The lores and orbital skin are green and the irises are yellow. The sides of the head, neck, back and upper wings are transversely barred black and buff. The tips of the flight feathers are white. The under parts are buff streaked and spotted with black. The tail is barred black and white. The legs are brown, yellow behind and the undersides of the toes.

Variation: The female tends to be smaller and has narrower buff barring on the upper sides and pink cinnamon on the underside.

Juvenile: The immature bird has broader barring. The lighter color goes from rufous to sandy with age, probably in successive plumages as in other tiger herons.

Chick: The chick’s down initially is yellow and then white.

Voice: the voice is a booming, like a bittern. It is a single or double note repeated slowly for several minutes.

The White-crested Tiger-Heron is identified by its transversely barred black and buff plumage, black cap and white crest. It is distinguished from the European Bittern by its darker plumage (narrower light barring), and slender (not stout) appearance, and its longer neck (Rodwell 1996).

The tiger herons are a distinctive lineage of the Ardeidae, adapted to a forest existence. The five species constitute a sister group to all the other herons and bitterns and to the Boat Billed Heron (Sheldon et al. 1995).The African Tigriornis is a sister taxon to the American Tigrisoma. Morphologically it appears to be more closely related to the Asian New Guinea Tiger-Heron than to the American tiger herons (Payne and Risley 1976).

Migration: The species is sedentary but there may be dispersal.

Status: This species is seldom seen and very seldom reported on. It is locally common in parts of Gabon and the forests of the lower Congo swamp forests (Turner 2000). 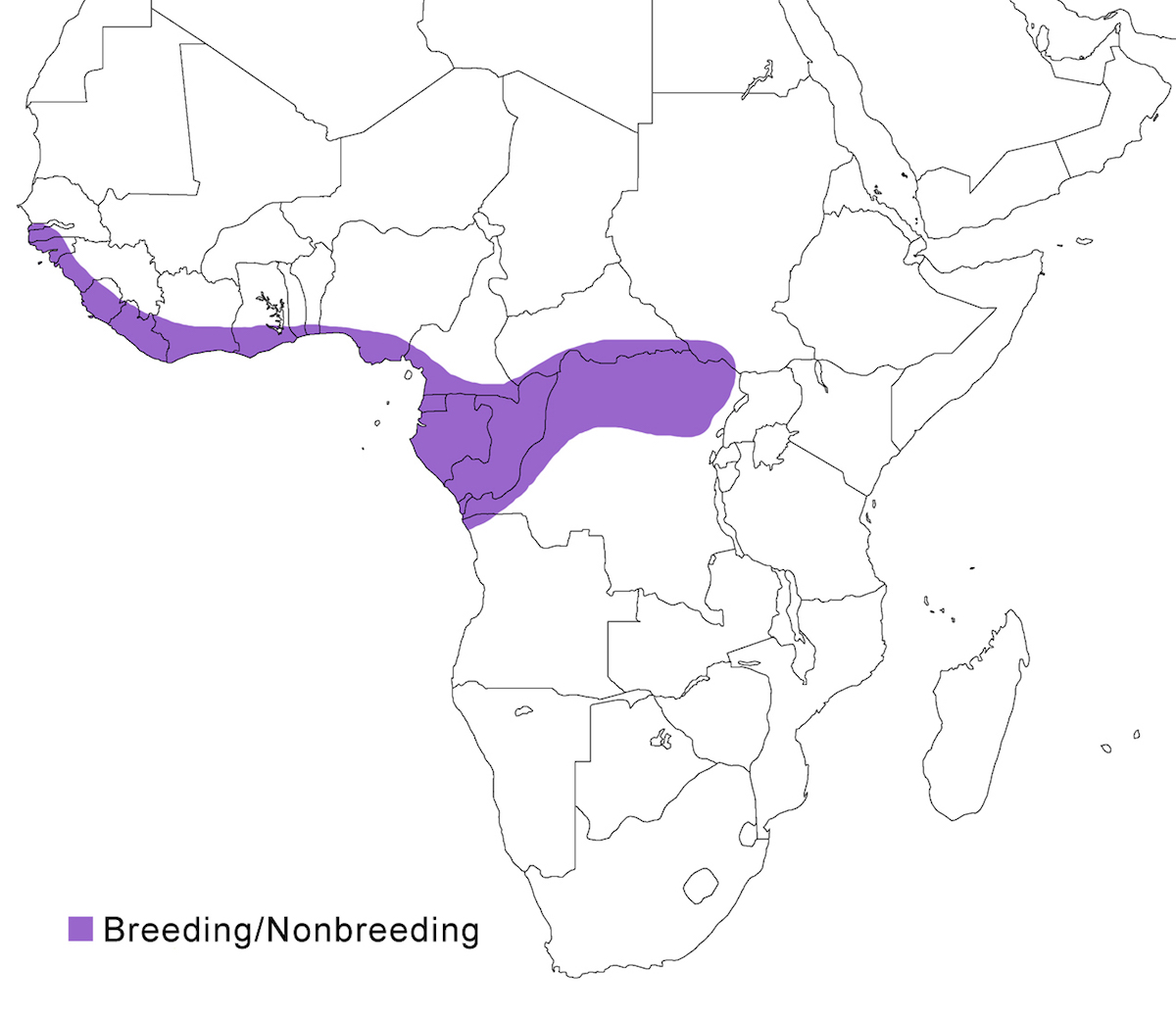 The White-crested Tiger-Heron is a bird of the tropical rain forest, occurring along small streams located in marshes or swamps within the forest, gallery forests along rivers, and mangrove lined streams on the coast.

The White-crested Tiger-Heron is a solitary feeder, and is probably nocturnal. Its feeding behavior has not been described. It assumes a Bittern Posture when disturbed. The details of the diet are not understood. It eats small fish, crabs, crayfish, frogs, snakes, and insects. It likely has a broad diet of whatever it can catch along the river shore.

Breeding biology is nearly unknown. Nesting appears to be in the rainy season. Egg laying dates have been documented as: Sierra Leone September–October; Liberia October; Cameroon May; and Gabon January. It nests solitarily as far as is known, in trees. One display has been described, apparently having a large threat component. A bird in captivity spread its tail and primaries, retracted its neck, spread it white crest, and moved rhythmically from side to side while hissing.

The single nest described was a loose, flimsy structure of twigs. It was placed 6 m high in a tree. One egg described was beige yellow with purple and blue grey blotches and smaller red brown sports. It was 55 x 45 mm. The estimated incubation period is less than 29 days.

There is no information on breeding biology of the species.

The lack of data on the distribution and status, combined with almost no information on its biology, poses a significant conservation risk. There is nearly nothing known about this heron and so it is not possible to assign a degree of conservation concern or develop a conservation strategy. It is listed as Data Deficient by IUCN (IUCN 2003).

Any information on its biology would be valuable. Surveys need to be undertaken to determine the distribution and density of the species within its habitat and its habitat requirements. Studies are needed on its status and distribution, its basic biology and ecology in order to understand its conservation needs.

The White-crested Tiger-Heron is a stream-side heron of the African tropical rain forest. It uses various aquatic habitats, including small streams or swamps within the forest, gallery forests along rivers, and mangrove-lined streams on the coast. It is a solitary, primarily nocturnal feeder. Its feeding behaviour has not been described. It is hard to find and harder to observe.