The Yellow Bittern is a small, slender, light buff to light brown heron with a black cap and tail, and long thin bill.

Adult: The Yellow Bittern has a dull black to blue grey crown and crest. The forehead is brown. Its long, thin bill is pale ivory, darker (to black) on the top with a pink tinge, contrasting with yellow green lores and yellow irises. The throat is sandy brown with browner stripes with the sides of the neck buff, often with pink blush. The back is rufous to sandy brown with pink to maroon wash. The wing is characteristically patterned, with a light inner patch and black outer feathers. On the upper wings the major feathers (primaries, secondaries and coverts) are black whereas a patch of wing coverts is light sandy buff. The under wing patch is white, contrasting with the grey of the undersides of the flight feathers. The tail and its coverts are black. The under parts are sandy brown. The legs are yellow green. In courtship the base of the bill flushes red.

Variation: The species is sexually dimorphic in plumage. The females’ crown is indistinctly streaked instead of dark. The hind neck and upper back is rufous. Under parts are streaked dark red brown and buff, with black on sides of breast. The throat has chestnut buff streaks. The wing patch is darker than in males. There is considerable individual and geographic variation in shade of upper parts and under parts.

Juvenile: Immature birds lack the dark crown and have a dark streaked head, back and under sides. Upper bill is dark brown whereas the lower bill is yellow as are the irises. The wings and tail are the distinctive black of the species. Legs are olive yellow.

Chick: The chick is covered by a pinkish down.

Voice: The “Kakak” call, rendered “kakak, kakak”, is the flight call. The “Crrw” call, rendered “crrw, crrw”, is given in the Stretch and also by near fledging juveniles (Lansdown and Rajanathan 1993). The “Ohr” call is a loud, repeated, guttural grunt. A gentler call is given when the bird brings food to the nest. Deep wing flaps are shown in Circle Flights.

The Yellow Bittern is identified by its tawny brown color, black cap in the adult male, black and tawny wings, and black tail (Leader 1995b). It flies erratically, flashing its black wing edges.

The Yellow Bittern is one of the small bitterns, Ixobrychus, that share similar plumage, white eggs, scutellate tarsi, and ten tail feathers. It is closely related to the Least and Little bitterns, with which it shares a slender bill, uniform dorsal coloration, and plumage sexual dimorphism. Several subspecies have been proposed on the basis of differences in color, but the variation appears to be within the range of individual variation, which is substantial within the small bitterns.

Migration: North and central China populations move south in October. Southern populations are sedentary although there is evidence of local movements in India. Some birds remain in south China, Japan, north Thailand, and Burma, but other northern birds move south to Indonesia. Birds migrate at night. Northward migration is in mid April to late May. Dispersal records include Australia (Queensland, Western Australia), and Christmas Island (Stokes 1990).

Status: Little is known about population sizes. Numbers counted in various places are in the hundreds to low thousands. The species is common to abundant through its range and is undergoing range expansion (Lansdown et al. 2000). It is seriously declining on the Seychelles (J. Gerlach pers. comm.). 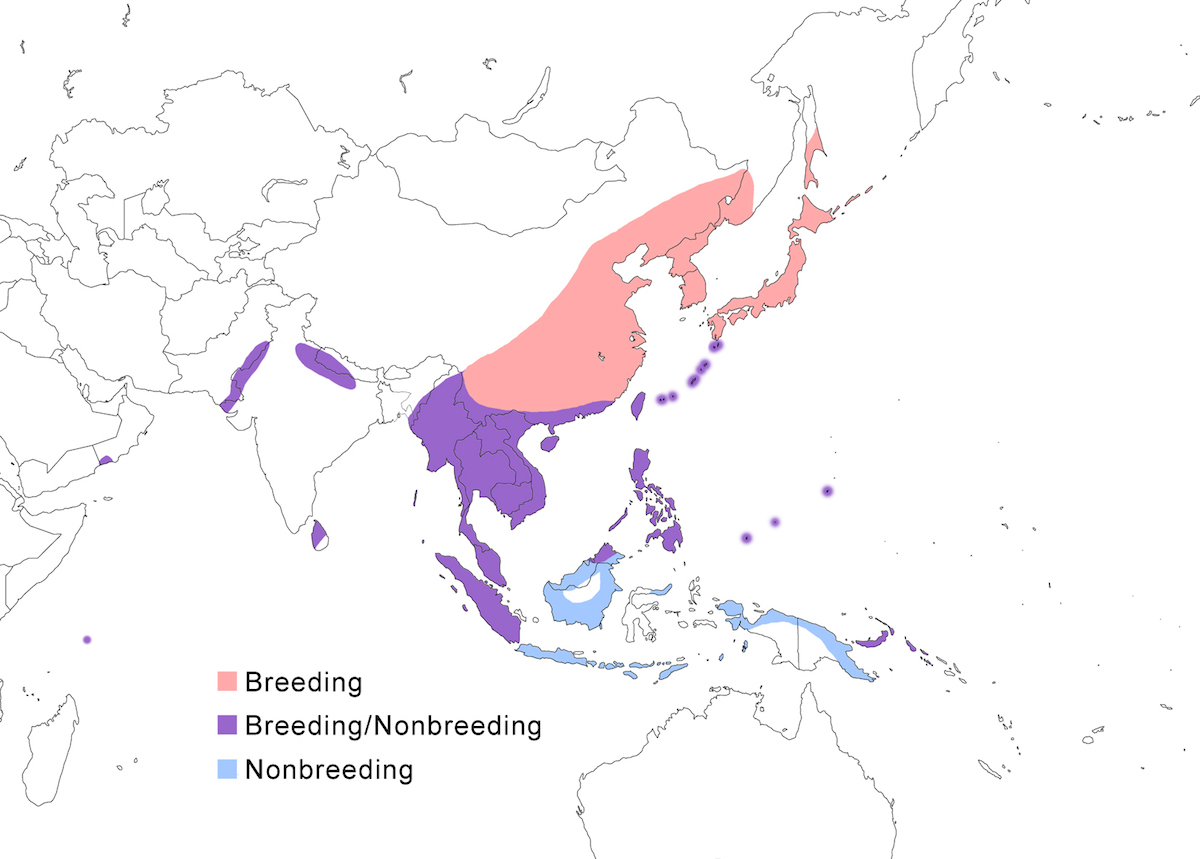 The Yellow Bittern occurs in fresh water marshes and swamps. It uses reed beds, shrubs or other dense vegetation around paddy fields, lakes, and sluggish rivers, and in mangrove swamps. In the Seychelles, it occurs in freshwater marshes behind the coast. It is primarily a low land species but occurs up to 1,500 m in Sumatra. It may roost in the hundreds in mixed species aggregations (Galbraith et al.1999).

The Yellow Bittern feeds by Standing and by Walking Slowly, climbing along reeds but also uses Standing Flycatching and Gleaning to catch small insects. It readily adopts the Bittern Posture when disturbed. It also uses more active foraging techniques such as Wing-flicking, and also Running and Hopping to pursue active prey (Lansdown and Rajanathan 1993).

It tends to be crepuscular, roosting at night and during midday on rice stalks or in gaps left by machinery (Lansdown and Rajanathan 1993). It is less shy than most of the small bitterns and upon landing perches for a moment instead of plunging straight into cover as do other small herons.

Onset of breeding activity coincides with spring or, in the subtropics, with the rains. It is June–September in India, July–October in Malaysia, May–August in Japan and China (Shiquan1990), and September–April in the Soloman Islands.

They primarily in bushes and herbaceous plants adjacent to extensive rice cultivation systems (Lansdown et al. 2000). Nests are especially placed in bushes surrounding or adjacent to water, for example on levees, next to ditches, around rice fields (Lansdown and Rajanathan 1993), and dwarf mangroves along the coast. They also nest in trees including tall banyan (Ficus). In herbaceous vegetation, nests are placed in reed beds, grass, marsh vegetation over standing water, including cattail (Ma 1990), bulrush, rice, wild sugarcane, bamboo, sword grass. They tend to be less dependent on less dense vegetation than the other small bitterns, but water under the nests sites, probably as protection, appears to be critical point in nest site selection (Uchida and Matsuda 1992).

Nests are solitary, clumped in small dispersed groups, or in small colonies (Lansdown 1987b, Shiquan 1990, Uchida and Matsuda 1992, Ueda 1996). As many as six nests can occur in a single tree (Lansdown and Rathanathan 1993). Nest density in China averaged 11.4 pairs/ha reaching 31.18 pairs/ha in irrigated fields (Shiquan1990). The nest is a pad, 15-25 cm in diameter. It is made of fronds and stalks of marsh vegetation, usually canopied by foliage bent over and woven together. The female builds nests. They typically are low, about 1 m above the water or ground.

The male advertises with a Stretch display, in which it assumes a hunched position, puffs out its throat, gives the Crrw call, and flushes the basal area of the bill (Lansdown and Rajanathan 1993). There does not seem to be an actual stretch, as there is in other small bitterns. The male also performs Circle Flight, with a slow wing flap, flying from, then around, and then back to the advertising site. It frequently Crest Raises, stretches one or other wing, and the jerks the short black tail from side to side at the end of which it depresses the tail to a right angle from the body (Henry 1971). Sites and nests are defended with Snap displays.

The eggs are milky green blue. They are 32-33 x 24.5 mm. Eggs are laid three days after the nest is complete. They are laid at one-day intervals. Clutch size is usually 4-6 with a range of 3-7. Egg laying within a colony may be prolonged, for example June–August in Japan (Uchida and Matsuda 1992). It is believed that two or even three broods may be raised in a season. If so that is a large number of annual nesting attempts for a heron. Moorhens (Gallinula) are reported to dump eggs in Yellow Bitters nests (Ueda 1993). The incubation period is 19 days, range 17-20 (Uchida and Matsuda 1992).

Feeding is by regurgitation, with the chick grasping the parent’s bill. The nestling period is remarkably short (Lu 1987, Uchida and Matsuda 1992). Nestlings can leave the nest as early as 5 to 8 days. Within 15 days, the young begin to clamber out of the nest with the agility characteristic of this species and abandon the nest completely by 20 days.

Nothing is known of the population biology and dynamics of this species.

As a small bittern that is fairly common and not as shy as other species, it is fairly well known, especially by rice farmers, who consider it to be beneficial. Rice fields are a critically important habitat for the species and may be responsible in part for its recent range expansion (Lansdown et al. 2000). It is probably a species that has benefited from the clearing of lowland forests for rice. As a result, its future in many ways depends on the distribution and continuation of rice farming practices conducive to the species. Integrating bittern conservation into rice field management is an important conservation action. Important nesting areas need to be identified so as to emphasize the importance of some rice systems.

As a possibly expanding species, its breeding and non-breeding ranges need to be clarified so that future expansion can be documented. Range-wide surveys should be conducted to determine the most important nesting areas, and in each such area the importance of rice cultivation should be evaluated. Individual, sexual, developmental, seasonal, and geographic variability within the species should be further studied to determine if there are populations that merit taxonomic distinctiveness. As an expanding species, additional study of its courtship, foraging, nesting success, and demography are desirable.

The Yellow Bittern is a bird of fresh water marshes feeding on fish, insects, and other invertebrates. It particularly favours dense water edge vegetation, either reeds or woody plants and rice fields. It feeds in typical small bittern style, Walking and Standing, but also uses surprisingly active behaviours to startle or run down prey. This active behaviour is not as common among egrets. Perhaps the most intriguing aspect of its little known biology is the rapid nesting cycle. Chicks grow exceptionally fast and are quickly independent, and as a result it is possible that the species has multiple clutches during the season. As this is an unusual situation in herons, it suggests an interesting demography. Patterns of survivorship of both young and adults may similarly differ from the heron norm. It is a successful species, one that is in the process of expanding its range, especially in response to rice field development. Its dependence on rice fields becomes a critical aspect of its biology, as it nests more densely in flooded fields. Therefore agricultural practices affect the species.