Adult: The Zigzag Heron’s head and neck are mottled grey with a black crest forming a prominent mane giving the bird a thickheaded appearance (Davis et al. 1980). The bill is relatively short and dark. It may be all black, but they may also have a black or grey upper bill and horn or yellow lower bill. The irises are yellow and the lores are grey to black. The brown and black back and upper wings are barred and speckled and with buff white vermiculation. Under parts are buff cream, heavily barred, speckled and streaked with black. The legs are grey horn with yellow toes. The upper part of the leg is nearly fully feathered.

Variation: The sexes are alike. There appears to be considerable individual variation that requires further study.

Juvenile: The juvenile plumage differs from the adult. The immature bird has a rufous forehead, sides of head and neck. The bill is yellow green. It is paler on the back with more rufous zigzag barring. The under sides are tawny, with sparse indistinct black stripes. The legs are yellow green. The immature plumage was once thought to be a rufous phase.

Chick: The chick has yellow cream or white down.

Voice: The “Kreeik” call is the alarm call. It is a “kreeik” becoming a “krik” (Matthews and Brooke (1998). The “Oooop” call is a hollow hooting used by adults, to which birds responded aggressively on playback (English and Bodenhorst 1991).The “Ahnnn” call also is a distance communication call given most frequently by juveniles. It too is a call also responded to aggressively by both adults and juveniles and used in chorusing between individuals (Ascanio-Echeverria and Davis 2000). The “Oooop” and the “Ahnnn” calls are also combined and given in a series. These are loud long carrying calls, such as would be expected in a forest heron, and appear to be recognition, distancing and very likely territorial calls.

The Zigzag Heron is identified by its small size, dark vermiculated color scheme, and cryptic habits. It flies in an indirect weaving manner (Lyles pers. comm.). It sits uncharacteristically for a heron in a perched posture, rather horizontal with the neck pulled in (Davis et al. 1980). It is distinguished from an immature Green Backed Heron and small bitterns by the white barring on its black back.

The systematic position of this species has been a matter of great debate, being moved about taxonomically to reflect closer affinities to the tiger herons or to the bitterns. Recent molecular studies revealed the Zigzag heron to be a bittern (Sheldon et al. 1995). In addition to the biochemical evidence, it similar to bitterns in having 10 tail feathers (unlike the 12 of typical herons), scutellate tarsus, a long inner toe, and white eggs (not splotched like tiger herons). The Zigzag Heron’s habit of using thorns in the nest is similar to the habits of two forest bitterns, the African Dwarf Bittern and Black Bittern. But it also is similar to some of the tiger herons in having three powder down patches, rather than two in bitterns. It is encouraging to have the lineage of this long time problem heron resolved.

Migration: As far as is known, the Zigzag Heron is sedentary.

Status: Nothing is known about population sizes of this species but it is now understood to be widely distributed in the forests and wetlands of north South America and it is increasingly observed as it is now being expected by ornithologists and ecotourist guides. 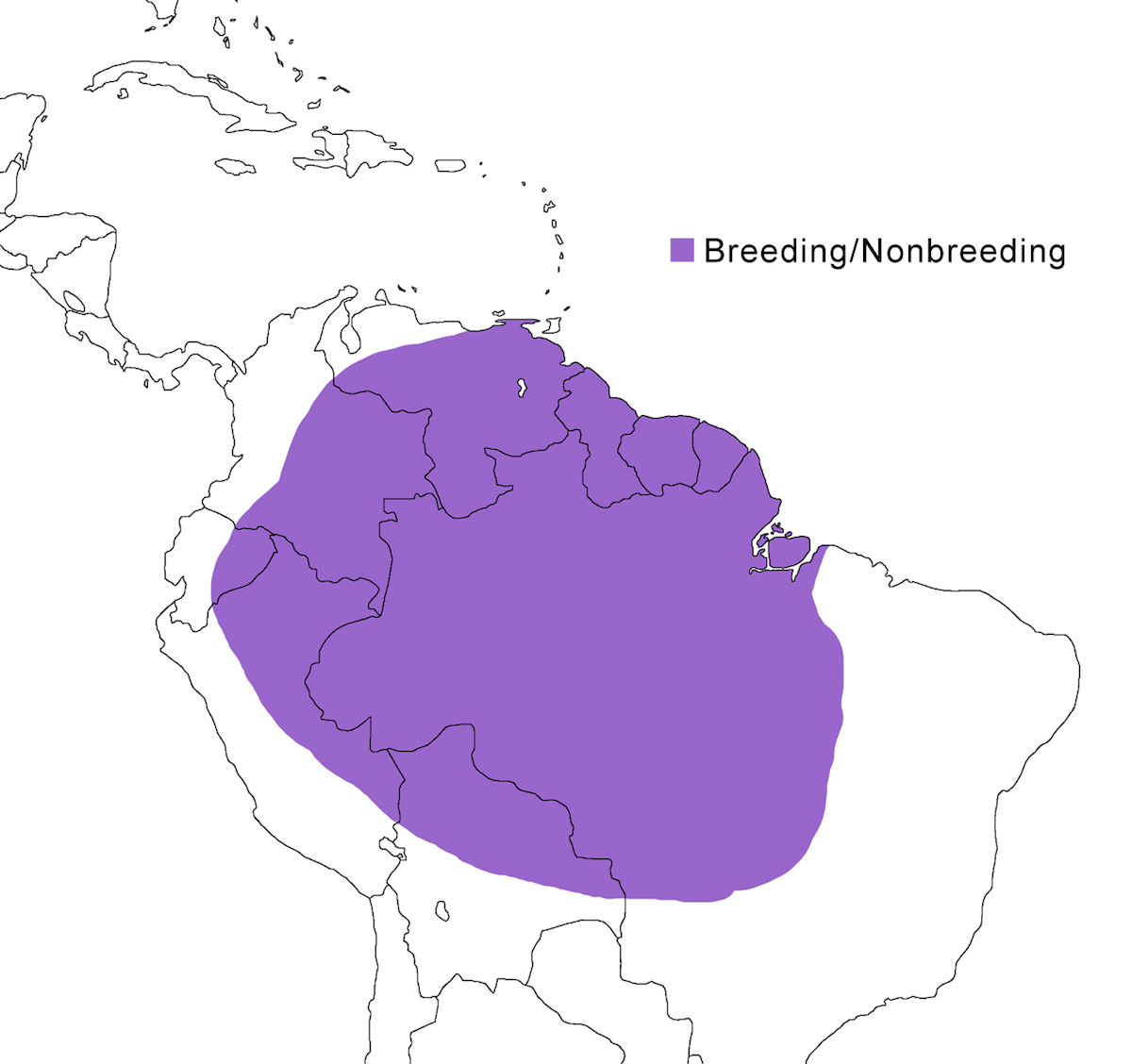 Its primary habitat is tropical forest near and along the edges of rivers and oxbow lakes (Davis et al. 1980, Mathews and Brooke 1988, English and Bodenhorst 1991). It specifically occurs along slow moving rivers and streams lined with thick overhanging trees, exposed roots, and fallen logs, from which it can fish. It uses this habitat within undisturbed tropical forest and also the narrow gallery forests of the llanos (Ascanio-Echeverria and Davis 2000). A second habitat it uses is the edge of depression ponds, river pools and oxbow lakes, surrounded by either trees or grass. Although observations are few, it appears that a third principal habitat is the forest floor. It occurs from the flat lowlands to about 200-500 m.

It has a diversity of feeding methods (Davis et al. 1980, Mathews and Brooke 1988). Most typical is feeding by Standing on a perch above the water on branches, logs, or roots. It stands with its neck retracted. When it sees a fish, it often wags its tail back and forth, bends more horizontally, extends its neck and then lunges, while holding onto the branch. When it lunges vertically it depresses its tail and catches the branch to provide additional support. It also uses Standing while wading in the water. It Walks slowly in the water, along the shore or on the forest floor. While Walking or wading, its capture is Pecking at the surface rather than Stabbing. It has also been described as hopping along the ground on the forest floor (Scott in Sick 1993). It uses Standing Flycatching from a Bittern Posture to catch flying insects.

It feeds during the day, particularly at dawn and dusk when it also calls. When not feeding, particularly midday, it perches 5-10 m high in trees, where it is most often seen standing, preening and tail flicking. When perched its has been observed to jump into the air and turn 180° on its perch (Davis et al. 1980).

It eats small fish and insects. Probably its diet is varied, depending on what is available.

The Zigzag Heron breeds April–July in the west of its range. It nests solitarily in trees near and overhanging water. There may be other herons nesting nearby, particularly the Rufescent Tiger-Heron. The nests are shallow round platforms, averaging 17 x 22 cm (English and Bodenhorst 1991). They are made of twigs and often incorporate thorny branches along the periphery. Nests are placed low in the trees or bushes next to the water, 1.5-3 m high. They may be low enough to be washed away in unexpected flood events.

Nothing has been reported on courtship. The egg is white and unspotted. Evidence so far suggests that the species lays only one egg, which would be very intriguing if it turns out to be so. There is evidence of multiple clutches in a year (English and Bodenhorst 1991).

Incubation time has not been recorded.

Both adults attend young. One adult is usually at the nest until the young are larger than they are usually not in attendance, probably because of the need to feed. When disturbed at the nest the adult assumes the Bittern Posture. The plumage of the chick changes with age (English and Bodenhorst 1991). Chicks darken to rufous on face and back; bill and legs are yellow green and irises yellow. Older juveniles become uniformly yellow cream with grey wings and no rufous. The head had neither white of the hatchling nor black of the adult. There is no information on breeding success other than on individual nests.

Post nesting, nothing is known of the population biology or demography of this species.

Once considered to be near threatened by IUCN and HSG (Hafner et al. 2000), the species is now known to occur over much of north South America and is readily seen in some areas. Likely the total global population is substantial. The species now should be considered to be widespread although in low density and not threatened. None the less threats do remain. Morales (2000) points out that critical to the conservation of this species is the preservation of the great river landscapes of South America, the Amazon, and the Orinoco. This bird may be an indicator and symbol of undisturbed ecological conditions within these watersheds. The conservation of this species may be tied also to the conservation of the Rufescent Tiger-Heron that occupies much the same habitat.

Much has been learned about this species over the past 20 years, enough to confirm that it is, as expected, an intriguing species. Its breeding biology, particularly clutch size, success, and nesting cycles, need to be further examined. It is likely to reveal interesting twists in heron biology which may in turn reveal basic understanding of the biology of forest herons. Observations and surveys need to continue to locate concentrations that can be identified as important areas for conservation. Perhaps touring associations and lodges can adopt this species as one to be sought after, recorded, monitored, and reported upon. Some of the morphological peculiarities of the heron, particularly the use made of its tail in grasping the branch during a vertical fishing lunge are intriguing. A study of its functional morphology might reveal an interesting suite of adaptations.

Our understanding of the ecology of this species, while imperfect, has improved markedly through several observational papers. It is clearly a forest heron that uses the wooded banks of slow-moving streams and pools, which it fishes by perching and lunging at prey below. This is similar in some ways to the Green Heron. However, it does this with some unique twists, such as grasping with its tail, not a typical heron ability. Moreover, it has a much wider feeding repertoire than ever was suspected and also a wider range of habitat preferences. An extreme dependence on deep forests is not the case. Rather, it uses wooded stream margins, the width of which seems to be not so critical. Additionally, it can use grass-lined pools and the forest floor, on which it feeds Pita style. Its behaviour is so much more versatile than ever thought. Even more intriguing are hints about its society. That young respond aggressively to play back suggests they may be defending familial territories. That the species may only lay one egg, suggesting limits to successful reproduction, further strengthened by the hint of multiclutching. Intriguing suggestions from the anecdotal literature so far assembled are that this may be a species with limited annual reproductive potential implying a long life-span perhaps in secured long-standing territories, a classical K-selected scenario. There is much here to generate testable hypotheses.